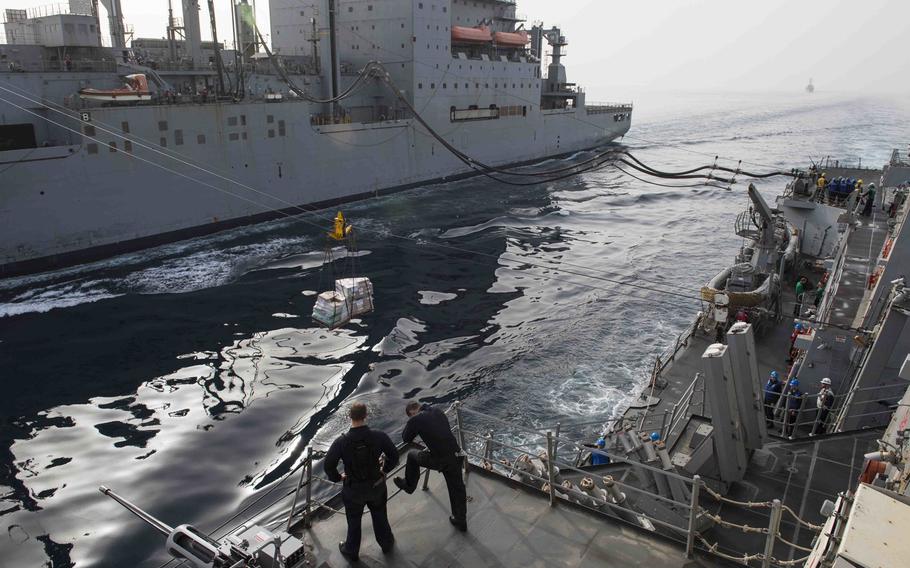 The guided-missile destroyer USS Farragut takes on fuel and supplies during a replenishment April 24, 2015. U.S. Navy Central Command dispatched the destroyer to the Strait of Hormuz after the Iranian navy seized a Marshall Islands-flagged cargo ship April 28, 2015. (Jackie Hart/U.S. Navy)

MANAMA, Bahrain — An Iranian frigate pointed a crew-served weapon at a U.S. Navy helicopter and a coalition auxiliary ship during a U.S. training exercise last month in the Gulf of Aden, the Navy said Wednesday.

The helicopter was launched from the guided-missile destroyer USS Farragut, which witnessed the incident, said Cmdr. Kevin Stephens, a 5th Fleet spokesman. Stephens said the Iranians were apparently seen videotaping the crewmember who was manning the weapon pointed at the helicopter and ship.

U.S. and coalition forces did not respond to the Iranian move, and the Iran vessel, identified as an Alvand class frigate, sailed away.

The Iranians have a history of threatening behavior in Middle Eastern waterways, including firing shots at a Singapore-flagged tanker in May.