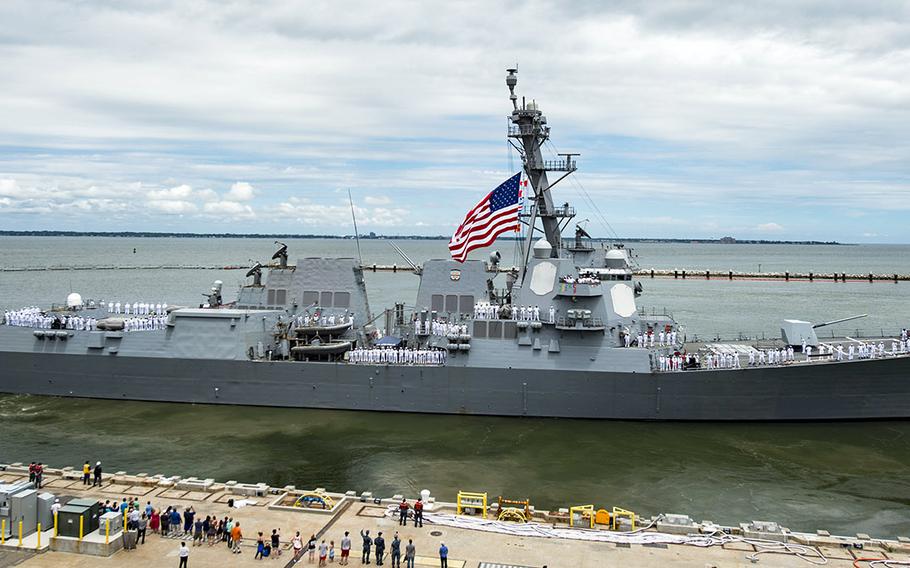 MANAMA, Bahrain — Four Iranian gunboats sped close to a U.S. guided-missile destroyer in the Strait of Hormuz in what the U.S. Navy called an "unsafe and unprofessional" encounter. Iran warned that its forces would respond to any foreign vessel entering its territorial waters.

Elsewhere, a U.S. official told Stars and Stripes that another U.S. warship was involved Wednesday in an incident with Iranian vessels. The official said the incident involved Iranian fast boats acting unprofessionally around the USS Squall, a coastal patrol ship.

The official provided no further details and spoke on condition of anonymity because he was not authorized to speak about the incident to the media. Fox and CNN said the U.S. ship fired a warning shot after the Iranians closed within 200 yards in the northern Gulf.

The Wednesday incident occurred one day after Iranian vessels approached within 300 yards of the U.S. guided missile destroyer USS Nitze in the Strait of Hormuz at the southern end of the Gulf.

The Nitze, which was sailing with another guided-missile destroyer, the USS Mason, fired 10 warning flares, sounded its ship whistles and tried unsuccessfully to communicate with the Iranian boats a dozen times, U.S. defense officials said.

Nitze changed course away from the Iranian vessels despite being near offshore oil rigs to de-escalate the situation and avoid collision, the Navy said.

The boats from the Iranian Revolutionary Guard navy eventually left the scene after coming within 300 yards of the Nitze. A U.S. Navy spokesman, Cmdr. Bill Urban, criticized the Iranian actions as “unsafe and uprofessional” and could “lead to escalation and miscalculation."

“Commanding officers have an inherent obligation for self-defense,” Urban said.

In response, Iran’s defense minister warned that Iranian forces would respond to any foreign ships entering its territorial waters.

“If any foreign vessel enters our waters, we will give them a warning, and if it is an act of aggression, we will confront them,” Gen. Hosein Dehghan told Iranian media Thursday.

The incident has raised tension between the two longtime adversaries in an area that has remained an international flash point for decades.

Iran has long claimed it has a legal right to control access to the Strait, which is the southern entrance to the Persian Gulf, although international maritime law guarantees the right of passage under a set of transit rules.

In 1988 the U.S. Navy sank three Iranian warships and destroyed two surveillance platforms after an American naval frigate was damaged by an Iranian sea mine.

The Obama administration had hoped that an agreement reached last January to curb Iran’s nuclear program and end international sanctions against Tehran would help defuse those tensions.

In January, however, the Iranian navy captured 10 crewmembers from two U.S. patrol boats that strayed into international waters in another part of the Gulf. The sailors were released within 24 hours.

In 2015 and the first half of 2016, the U.S. Navy ruled that about 10 percent of its interactions with the Iranians were unsafe or unprofessional, Urban said.

The Strait of Hormuz is only 21 miles wide at its narrowest point between Iran and the Arabian Peninsula. About one-fifth of the world’s oil supplies flows through the Strait.