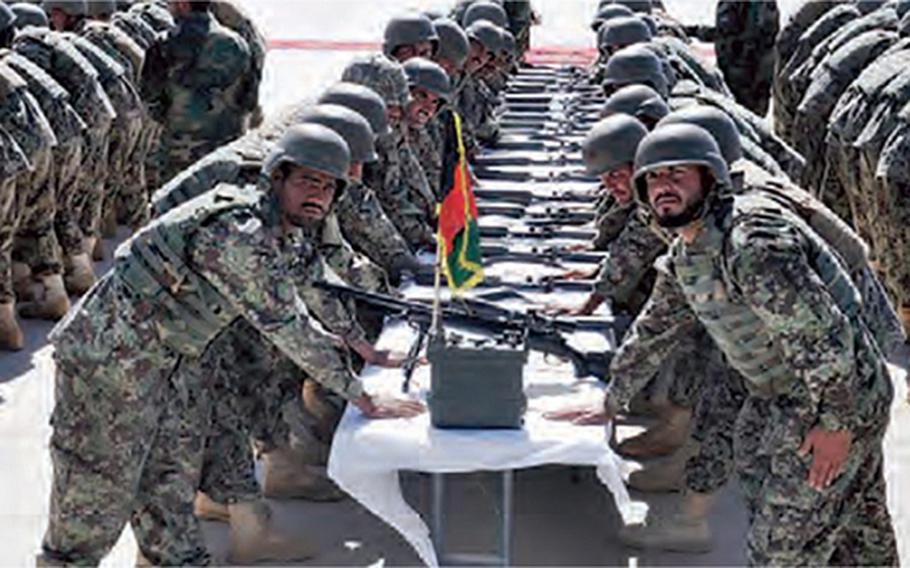 215th Corps soldiers of the Afghan National Army graduate from their training program in Helmand Province in in October 2020. (Afghan Defense Ministry)

KABUL, Afghanistan — Attacks by enemy forces in Afghanistan were up by half in the three months ending in September compared with the previous quarter, a report by a U.S. government watchdog agency said Thursday.

The spike in Taliban violence was “not consistent with” a deal reached by the insurgents and the U.S. in February that spells out conditions the Taliban have to meet if U.S. troops are to withdraw fully from the country by May 2021, the head of U.S.-led forces in Afghanistan, Gen. Scott Miller, was quoted as saying in the report by the Special Investigator General for Afghanistan Reconstruction.

Among those conditions is an obligation on the part of the Taliban not to threaten the security of the U.S. and its allies, including an unwritten agreement that the insurgents will not attack American or coalition personnel in Afghanistan, the report said.

But in August, the insurgents might have targeted American military installations in Afghanistan twice, it said, citing a New York Times report. The attacks were reported not to have caused casualties, but would have violated the February deal, it said. They also undermined peace talks that began last month between the insurgent group and the Afghan government. Those talks, which were supposed to begin in March, were another condition of the February deal.

The Taliban also have not severed ties with al-Qaida, as called for in the deal, the report said, citing a Defense Department assessment.

American officials consistently have said U.S. troop reductions in Afghanistan are conditional on whether the Taliban fulfill commitments they made under the deal.

Failing to do so “could impact whether the United States executes the planned full withdrawal of U.S. forces” and affect the amount of financial assistance the U.S. provides to a future Afghan government that includes the Taliban, the report said.

The number of U.S. troops in Afghanistan is expected to be reduced to 5,000 by the end of this month, with a complete withdrawal still possible by May, it said.

No U.S. troops have been killed by hostile action since the February deal, but casualties among Afghan civilians and security forces were up last quarter, as were U.S. airstrikes and ground operations by Afghan special forces, which reached levels not seen in more than a year, SIGAR said.

Under the deal, the Americans and the Taliban agreed not to attack each other, but the U.S. retained the option of targeting the Taliban in defense of Afghan forces, and several U.S. airstrikes were launched against the insurgents’ positions in Helmand province last month as the Taliban attacked the provincial capital of Lashkar Gah.