Insider attacks in Afghan security forces spike as US withdraws 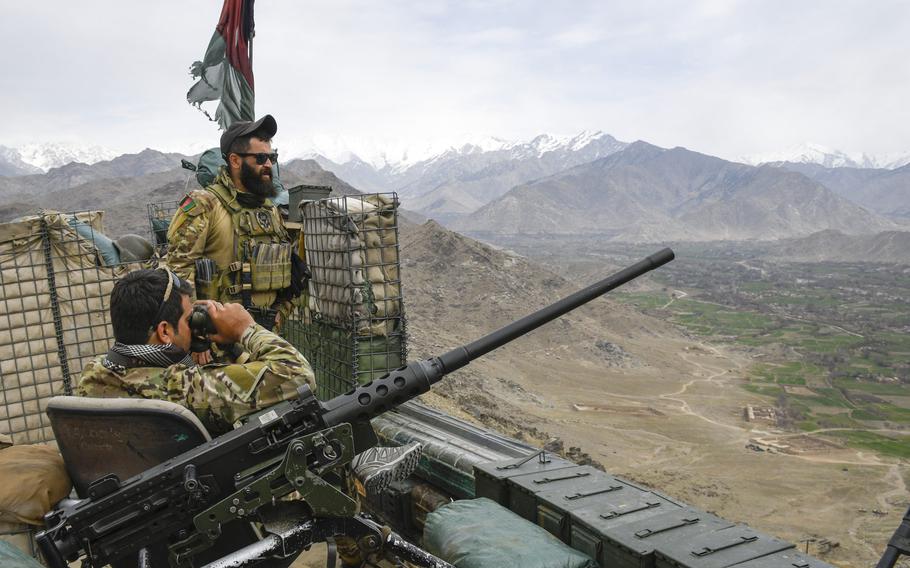 Afghan commandos watch as mortar shells pound Taliban positions March 10, 2021, in Kapisa, a province northeast of Kabul, Afghanistan. Attacks on Afghan troops and police by militant groups and insider attacks were up sharply in the first three months of 2021, the Special Inspector General for Afghanistan Reconstruction said in a report. (J.P. Lawrence / Stars and Stripes)

KABUL, Afghanistan – Deadly insider attacks in the Afghan security forces nearly doubled this year compared to 2020, fueling fears that local troops and police will be hard pressed to maintain stability in the country as the U.S. withdraws, a U.S. government report and analysts said Friday.

Insider attacks spiked by 82% in the first three months of this year compared to the same period in 2020, with one occurring every three days, said the report by the Special Inspector General for Afghanistan Reconstruction.

The number of Afghan soldiers and police killed in the attacks more than doubled compared to January to March last year, to 115, said the report, which was released as the U.S. military withdrawal from the country was underway.

The commander of American forces in Afghanistan, Army Gen. Scott Miller, said during a news briefing in Kabul Sunday that although the withdrawal from the country was not set to formally start until Saturday, some “local actions” related to the drawdown had already begun.

Miller said he aims to leave Afghan security forces “in the best possible security posture” while ensuring the safety of foreign troops as they exit.

The withdrawal, which is supposed to be complete by September 11, would end America’s longest war.

If insider attacks in the Afghan National Defense Security Forces, continue to rise in the coming months, ANDSF’s ability to counter the Taliban would be severely weakened, Seth Jones, a counterinsurgency expert at the Center for Strategic and International Studies, said in an email Friday.

Violence in Afghanistan has risen over the last year, SIGAR said.

Attacks by militant groups against Afghan security forces were up 37% in the first three months of 2021, it said. Members of the security forces and civilians were among the victims of the attacks, SIGAR said. The report did not release the number of ANDSF members killed in those attacks, saying the data is classified.

But independent watchdog group, Afghan Peace Watch, has documented some 485 deaths of ANDSF personnel in the first three months of the year, and 452 wounded.

The insider attacks — also called "green on green" attacks — were part of a “deliberate and carefully calculated effort by the Taliban to demoralize the ANDSF and prepare the battlefield for the coming civil war after the peace talks break down,” said Chris Mason, a professor at the U.S. Army War College and a retired foreign service officer who was part of a reconstruction team in Paktika province, which borders Pakistan.

“Trust in ‘the man on your left and the man on your right’ is the critical foundation of military effectiveness in combat in any army,” he said in an email. “If an enemy can undermine that trust by sowing seeds of doubt about the loyalty and reliability of a soldier’s fellow fighters, he can degrade the morale and fighting spirit of the unit from the inside.”

Many of the insider attacks happened in the south of the country, where the Taliban control much of the region, and police and local militias are not properly vetted when they are hired by local government officials, said an Afghan defense official who was not authorized to discuss the matter and requested anonymity.

Insider attacks may sap unit cohesion and the willingness to fight among Afghan forces, who are already dealing with ammunition shortages and are often not paid on time, said Andrew Watkins, a senior Afghanistan analyst at the Brussels-based think tank, the International Crisis Group.

“It really does have the potential to fuel wider mistrust, and eventually animosities in the security forces,” said Watkins, adding that if ANDSF isn’t “the glue that holds the country together,” Afghanistan might fall apart.