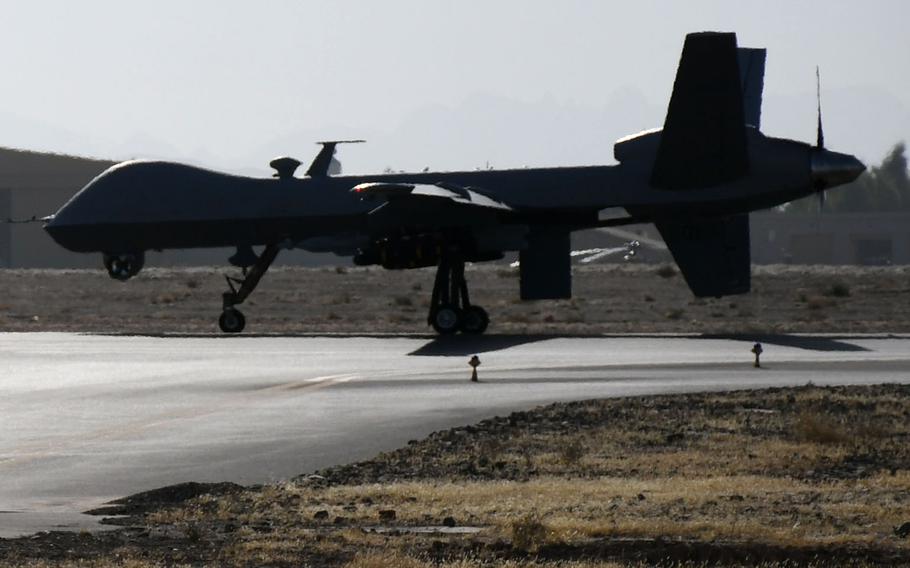 A U.S. MQ-9 Reaper drone taxis on the runway at Kandahar Airfield in November 2017. The U.S. military said this week that it will no longer release data on the number of airstrikes it conducts in Afghanistan, including those carried out using drones. (Phillip Walter Wellman/Stars and Stripes)

KABUL, Afghanistan — The U.S. military has stopped releasing information about airstrikes it conducts in Afghanistan, reversing a longtime policy amid a spike in violence in recent weeks, officials said.

The policy reversal was announced as the U.S. continues to withdraw troops as outlined in a peace deal with the Taliban, and days after a report said the military was withholding information on Taliban attacks.

U.S. officials have repeatedly expressed frustration over the slow pace of progress toward peace in Afghanistan, where nearly two decades of war have cost the U.S. around $2 trillion and the lives of roughly 2,400 service members.

Some analysts said that by withholding information previously released since 2006, Washington is trying to obscure the precarious security situation, even as the U.S. continues to draw down troops.

“The public is too smart to be hoodwinked by these attempts to remove bad news about the war from public view,” he said. “Being less transparent about the war effort will only entrench suspicion and unhappiness about the direction of the U.S. policy in Afghanistan.”

A separate monthly tally published by NATO’s Resolute Support mission detailing the number and location of U.S. airstrikes in Afghanistan has also been suspended, the RS mission said.

The number of sorties and munitions used in the campaign against the Islamic State group in Iraq and Syria will also be withheld from the public, said Capt. Kenneth A. Hicks, a spokesman for U.S. Air Forces Central Command. Those data had been published by AFCENT alongside the information on Afghanistan in recent years.

The decision to withhold information about airstrikes in Afghanistan was taken in part because “the reports could adversely impact ongoing [peace] discussions with the Taliban,” Hicks said.

But withholding the information will “only make it harder for the American public, journalists, and other observers to have an accurate picture of what the US military is doing in Afghanistan,” said Laurel Miller, a former U.S. acting Special Representative for Afghanistan and Pakistan.

The latest restrictions were announced days after the Special Inspector General for Afghanistan Reconstruction said that the U.S.-led coalition had decided to withhold data on enemy attacks for the first time. That information, which was used to measure security, “was one of the last remaining metrics” provided to SIGAR for public release, the watchdog said in the report released Friday.

Following the signing in February of a U.S.-Taliban deal, attacks by the insurgents on coalition forces decreased but those on Afghan security forces rose to levels beyond “seasonal norms,” SIGAR cited RS as saying.

The Feb. 29 deal would see all international troops out of Afghanistan by late spring 2021, provided the Taliban meets its obligations under the agreement, including launching negotiations with the Kabul government, disavowing terror groups like al-Qaida, and preventing any groups on Afghan soil from threatening the security of the United States and its allies.

The initial drawdown of U.S. troops was ahead of schedule, with fewer than 10,000 troops now in the country, CNN reported last week.

But the Taliban ramped up attacks on Afghan forces immediately after signing the deal, SIGAR chief John Sopko wrote in the report.

The text of the U.S.-Taliban deal doesn’t prohibit Taliban attacks against Afghan forces, but U.S. Forces-Afghanistan spokesman Col. Sonny Leggett said Saturday in a statement shared on social media that there had been a verbal agreement to reduce violence by 80%.