Hundreds of Marines, Army Rangers deploy to Syria in the fight against Islamic State 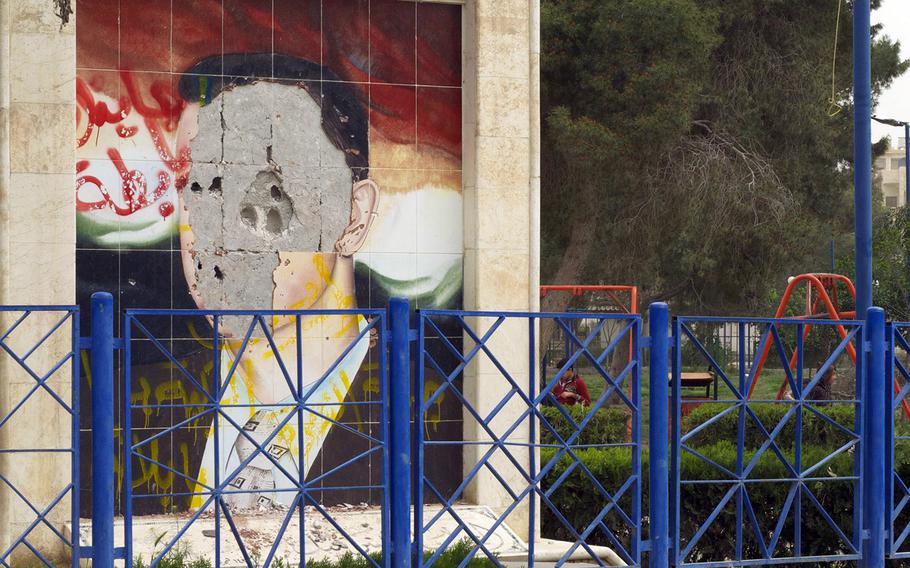 In a 2013 file photo, a defaced portrait of Syrian president Bashar Assad is seen on a wall in Raqqa, Syria. (David Enders/TNS)

WASHINGTON — About 400 Marines and Army Rangers have deployed to Syria to assist in the fight against the Islamic State group as local forces prepare to retake the terrorist stronghold of Raqqa, U.S. defense officials said Thursday.

Forces from the 11th Marine Expeditionary Unit have established a fighting position, which is operational, to provide artillery support in the upcoming battle for the city of Raqqa, a defense official told Stars and Stripes on the condition of anonymity. The official did not know whether those forces had already begun firing at Islamic State targets.

Separately, soldiers from the 75th Army Ranger Regiment are deployed to Manbij with Stryker armored fighting vehicles, as was first reported by the Washington Post.

Gen. Joseph Votel, who leads U.S. Central Command, said Thursday that the United States has sent forces to Manbij for the last six or seven months to ensure the Islamic State group does not re-emerge there. Votel also said the forces "add a measure of assurance" that rival Syrian Kurdish forces and Turkish forces located near the city do not end up fighting each other.

Turkey, a NATO ally, considers some of the Kurdish Syrian Democratic Forces, which are backed by the United States, to be affiliated with a terrorist group that has attacked Turkey multiple times. Turkey does not want those Kurdish forces to establish a permanent presence in Manbij and the Syrian forces do not want Turkey to assert itself in one of their cities.

The combination of the Marines and Army Rangers in Syria "allows the [anti-Islamic State] coalition to provide flexible, all-weather fire support, training and protection from [improvised explosive devices] and additional air support to our Syrian partners," Central Command said in a statement.

The number of U.S. troops now authorized to be in Syria is capped at 503, though that amount does not include the 400 Marines and Army Rangers because they are on a temporary deployment, a defense official said.

The temporary deployment could be an indication that the White House is leaning toward giving the Pentagon greater flexibility to make routine combat decisions in the fight against the Islamic State group. Military commanders frustrated by what they considered micromanagement under the President Barack Obama administration have argued for greater freedom to make daily decisions on how best to fight the enemy.

The Marines moving into Syria are pre-positioning howitzers to be ready to assist local Syrian forces, a U.S. official who spoke on the condition of anonymity told The Associated Press.

In addition, the United States is preparing to send hundreds of troops to Kuwait in order to be ready to join the Islamic State fight, if they are needed, the official said. The number would be fewer than 1,000.

Pentagon leaders sent a new plan to defeat the Islamic State group to the White House late last month. It outlined a strategy that would likely increase the number of U.S. troops in Syria in order to better advise and enable the U.S.-backed Syrian fighters who will take on the battle for Raqqa, the terrorist group’s urban stronghold in that country.

The U.S. military has mapped out a series of options for the Syria fight, including increased artillery support, more Apache helicopters and a more robust training campaign.

U.S. officials say the battle for Raqqa will look much like the fight in neighboring Iraq, where local forces are in a fierce battle to retake the northern city of Mosul from the Islamic State group. As troops were preparing to move into Mosul, the United States set up bases outside the city to use as logistical hubs and as locations for heavy artillery.

The moves to pre-position U.S. troops closer to the fight, so they can be tapped as needed, are the kinds of decisions that military commanders say they need to be able to make more quickly, without going to the White House every time for approval.