A burned out vehicle sits at the site of a suicide attack in Kabul, Afghanistan, Friday, May 31, 2019. A suicide car bomb exploded early Friday morning in an eastern neighborhood of the capital Kabul, leaving seven casualties, police said. (Rahmat Gul/AP)

A burned out vehicle sits at the site of a suicide attack in Kabul, Afghanistan, Friday, May 31, 2019. A suicide car bomb exploded early Friday morning in an eastern neighborhood of the capital Kabul, leaving seven casualties, police said. (Rahmat Gul/AP) 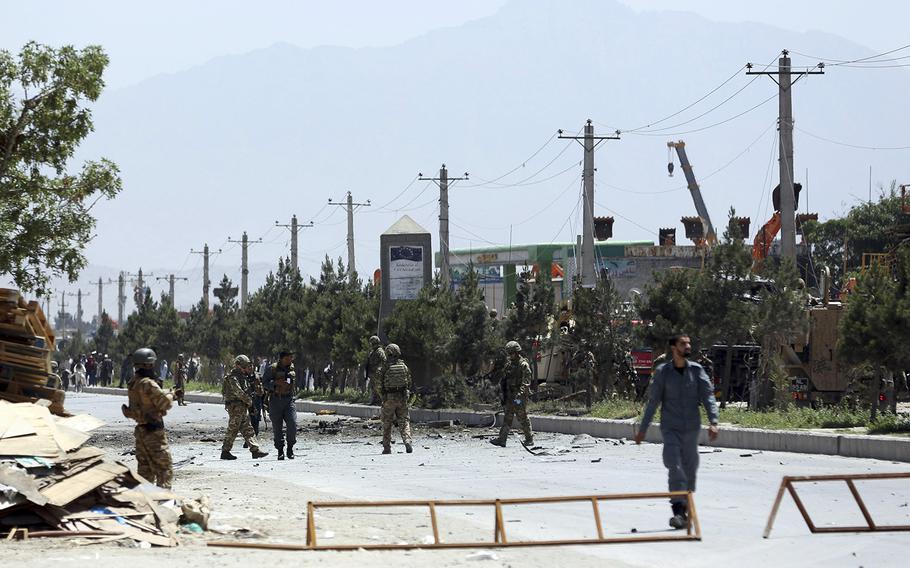 NATO and Afghan forces gather at the site of a suicide car bomb in Kabul, Afghanistan, Friday, May 31, 2019. In a second suicide attack in as many days to rattle the Afghan capital, a car bomb targeting a U.S. convoy exploded early Friday morning in an eastern neighborhood, police said. (Rahmat Gul/AP)

It was the second deadly blast to rock Kabul in as many days. The four Americans suffered minor injuries from the blast, which hit a convoy of armored SUVs at about 8:30 a.m., said Bob Purtiman, a U.S. military spokesman in Kabul. He declined to comment on the convoy’s mission.

The four killed were civilian bystanders, said Nasrat Rahimi, a spokesman for the Interior Ministry. At least three other civilians were wounded.

The Taliban quickly claimed responsibility for the bombing in a statement online, saying it killed 10 U.S. troops. The group frequently embellishes or exaggerates its claims.

The suicide bomber targeted the convoy as it was passing through the Yakatot neighborhood in eastern Kabul, a mostly residential area near U.S., NATO and Afghan military compounds.

The powerful explosion shattered windows and busted doors nearby, a witness said. After hearing the loud blast and seeing people running into his butcher shop just a few hundred yards from the bombing, Haji Aman rushed toward the site of the attack and found three armored SUVs and several other cars on the road damaged by the explosion, he said in a phone interview.

The area — normally crowded at the time of the blast with people going to nearby offices, including a nearby television station — was relatively empty, Aman said. Friday is the weekly day off.

“Thank God the roads were empty so it didn’t harm so many people,” he said.

On Thursday, several miles away, a suicide bomber on foot blew himself up outside the country’s military academy, killing six cadets and wounding 16 other people. An observant soldier prevented the attacker from entering the academy, likely saving lives, the Interior Ministry had said.

Both the Taliban and an Islamic State affiliate have carried out deadly, high-profile bombings in the capital in the past.

Suicide bombings in Afghanistan have been relatively rare so far this year, leading to a decrease in civilian casualties in the first three months of 2019. It was the lowest number of noncombatant deaths in the first quarter of any year since 2013, the United Nations mission reported in April.

Militants continue to attack Afghanistan’s embattled security forces nearly daily, despite ongoing peace talks with American diplomats aimed at bringing an end to the 18-year conflict. Over the winter, Afghan forces suffered nearly one-third more casualties in a three-month period beginning in December 2018 than they did in the same period a year earlier, U.S. military officials have said.

This week’s deadly attacks came as Taliban officials met with Afghan politicians for talks in Moscow. The insurgents have repeatedly rebuffed U.S. demands that they hold direct talks with the Kabul government, which the militants view as a U.S. puppet regime, but the Taliban have agreed to meet with Afghan officials as private citizens.

The group also denied reports this week that they would lay down their weapons for the Eid al-Fitr holiday that marks the end of the Muslim holy month of Ramadan next week, Afghanistan’s Tolo News reported on Friday. Last summer, the Afghan government and the militant group had announced truces that overlapped for three days of Eid.

The militants have rejected repeated calls for a permanent cease-fire, saying they will continue to fight as long as foreign troops remain in the country.