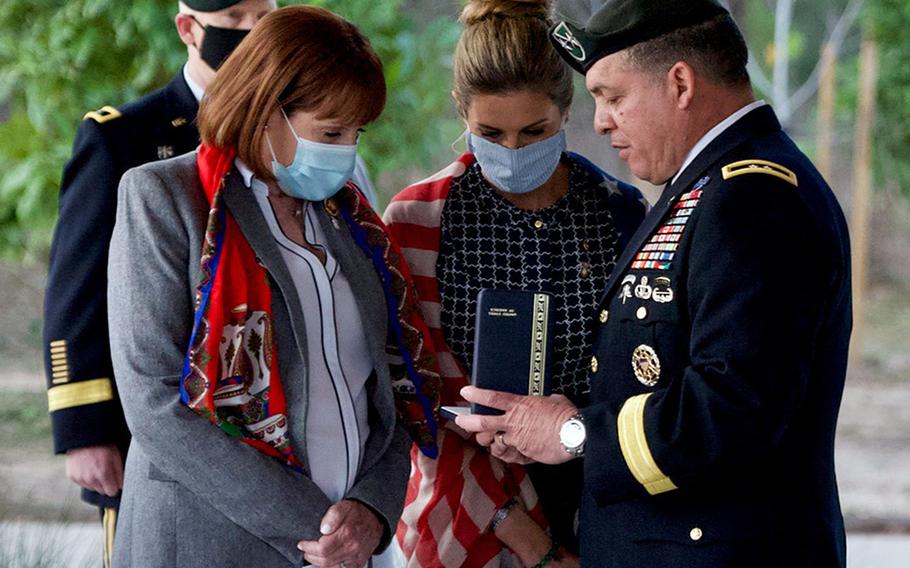 Staff Sgt. James F. Moriarty posthumously received the Silver Star Medal, Jan. 27, 2021, for his actions during an attack in Jordan in November 2016, in which he was killed. (U.S. Army) Staff Sgt. James F. Moriarty posthumously received the Silver Star Medal at a ceremony in Houston, Texas, Jan. 27, 2021, for his actions during an attack in Jordan in November 2016, in which he was killed. (Erin Powers ) 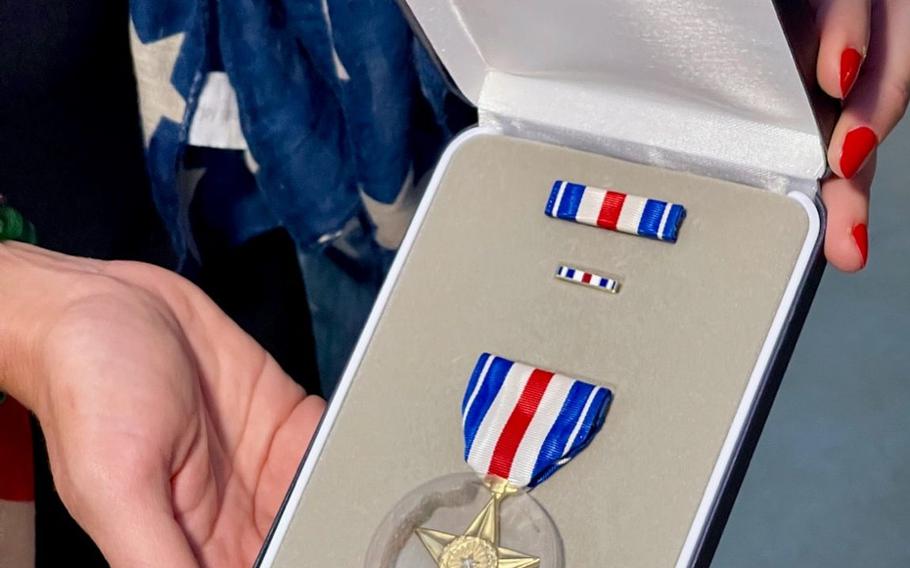 Staff Sgt. James F. Moriarty posthumously received the Silver Star Medal, Jan. 27, 2021, for his actions during an attack in Jordan in November 2016, in which he was killed. (Erin Powers )

Under fire from a charging gunman, Staff Sgt. Jimmy Moriarty stood and fired his handgun at the M16-wielding assailant who minutes earlier had killed two unarmed Special Forces soldiers.

His actions during the brazen attack on a convoy of U.S. soldiers at the security gate at Jordan’s King Faisal Air Base allowed another Green Beret to slip around a barrier to flank and disable the attacker.

Moriarty was shot twice, including once in the heart, and died on a medical evacuation aircraft over an hour later.

On Wednesday, more than four years after the deadly incident and on the day he would have celebrated his 32nd birthday, Moriarty’s family accepted a Silver Star Medal awarded for his courageous last stand.

Correa, a colonel at the time of the attack, investigated the incident that left Moriarty dead along with Sgt. 1st Class Matthew C. Lewellen, 27, and Staff Sgt. Kevin J. McEnroe, 30. The latter two were fatally shot before they could draw their weapons.

The three men were assigned to 5th Special Forces Group at Fort Campbell, Ky., and were in Jordan training opposition forces in the Syrian civil war, their families said in a lawsuit filed two years after their deaths. Moriarty had arrived around early July 2016; Lewellen and McEnroe had been in the country since late October.

On Nov. 4, they had left the Jordanian base about 140 miles south of Amman to conduct weapons training roughly 3 miles away.

They were returning in the second of three convoys, the first of which passed through the gate minutes before them without incident, before Jordanian Air Force 1st Sgt. Maarik al-Tawayha opened fire on the three vehicles carrying Moriarty, Lewellen, McEnroe and the fourth Special Forces soldier.

Jordan’s media and government initially claimed the attack happened when the Americans failed to heed the orders of gate guards, or that the guard was responding to the sound of gunfire, but video of the shooting released months later and an Army investigation showed that not to be the case.

A Jordanian military court convicted al-Tawayha in July 2017 and sentenced him to life in prison, but the families of the Americans filed suit against him and the kingdom seeking monetary damages. They claimed the Jordanian government had been complicit in aiding the attacker, who had acted on behalf of the Islamic State, by trying to cover up the act of terrorism.

A U.S. federal district judge ruled in late 2019 that Jordan had sovereign immunity. The family has so far been unable to serve a summons on al-Tawayha that would require him to respond to the suit, the latest court records show.

Al-Tawayha had advanced on Moriarty and the fourth Green Beret, firing on them as they tried to show they weren’t a threat.

Armed with only handguns and unable to grab body armor or radios in the initial chaos of the attack, they tried shouting for help, but none came from the other Jordanians in the area.

The Army found that guards had stopped the third convoy outside the gate because they were unsure of the threat situation, leaving the two Green Berets on their own.

Draped in an American flag, Moriarty’s sister, Becky Moriarty Davis, spoke on behalf of the family at the ceremony, saying the award affirmed what the family believed about his heroism and many other merits.

“Jimmy was by far my most favorite person on this planet,” she said. “I may have been his older sister, but to this day, I still look up to him.”

She described a trustworthy, funny, kind, “annoyingly smart,” man who lived his life to the fullest, including packing is last visit home with activities with family and friends.

“As hard as it as and as much as I know how much more he had to offer the world, I have some peace knowing he didn’t leave anything on the table,” she said. “He was a great, great man and this award solidifies that I’m not the only one who thinks so.”