Experts: A unified Taliban could bolster peace talks in Afghanistan Buy Photo
Hajji Abdullah Jan, once a district governor of Gamsir district in restive Helmand province, now lives in exile in the provincial capital of Lashkar Gah. Jan said the key to peace is not at the local level, but in talks with Taliban high leadership. (J.P. Lawrence / Stars and Stripes)

Buy Photo
Hajji Abdullah Jan, once a district governor of Gamsir district in restive Helmand province, now lives in exile in the provincial capital of Lashkar Gah. Jan said the key to peace is not at the local level, but in talks with Taliban high leadership. (J.P. Lawrence / Stars and Stripes) 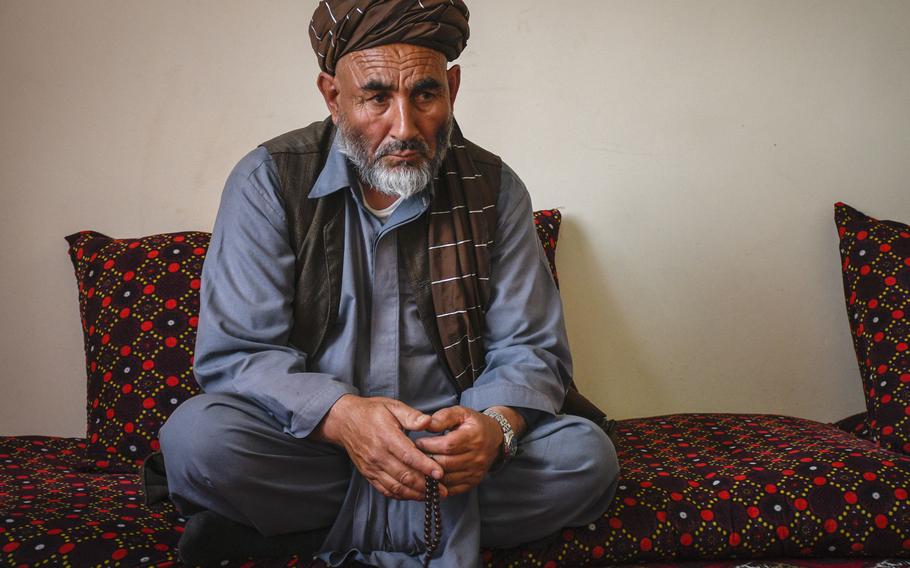 Buy Photo
Many pro-government leaders in Helmand province still consider the Taliban to be brothers who simply need to go through the right processes to reconcile, said Mohammad Sediq, a member of the people’s consultation council in Lashkar Gah in Afghanistan. (J.P. Lawrence / Stars and Stripes) 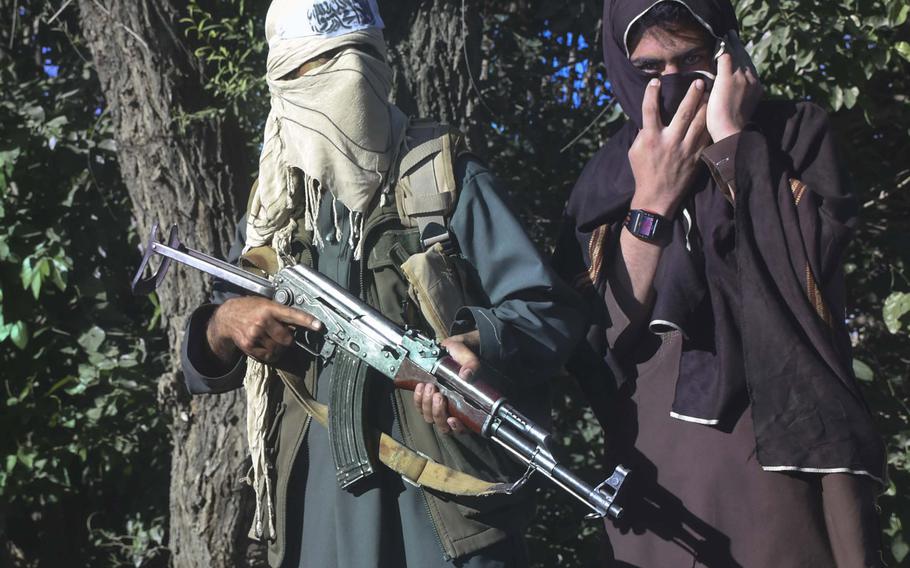 Buy Photo
Armed suspected Taliban members watch a convoy Afghan National Army pass through in Logar province during a cease-fire between the Taliban and the Afghan government in June 2018. (J.P. Lawrence/Stars and Stripes ) 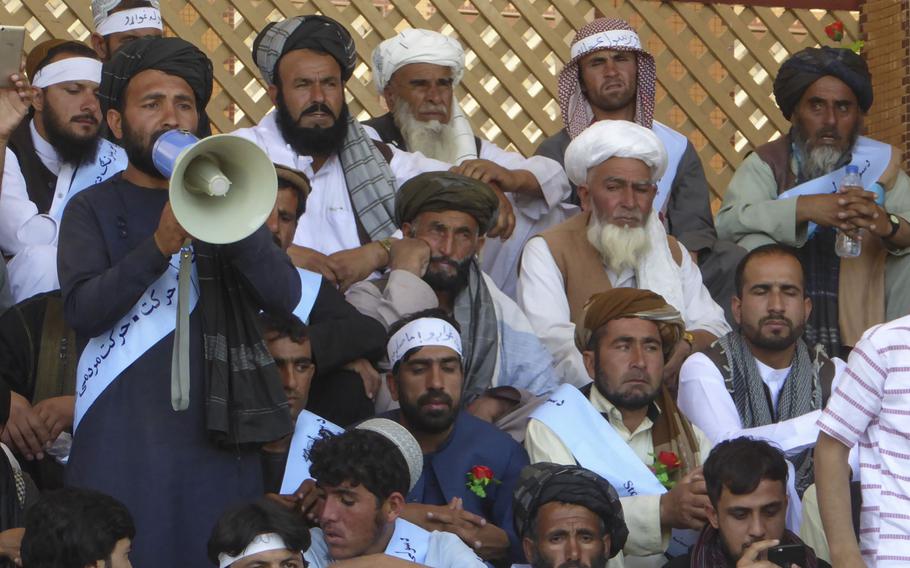 Buy Photo
Iqbal Khayber, an organizer of a peace march from Helmand province to the Afghan capital, speaks through a bullhorn at a gathering of the marchers in Kabul in June 2018. Peace activists who marched unarmed into hostile territory to talk to the Taliban in May said that while rank-and-file militants seemed keen for peace, their commanders insisted a political solution can only come from above. (Chad Garland/Stars and Stripes) 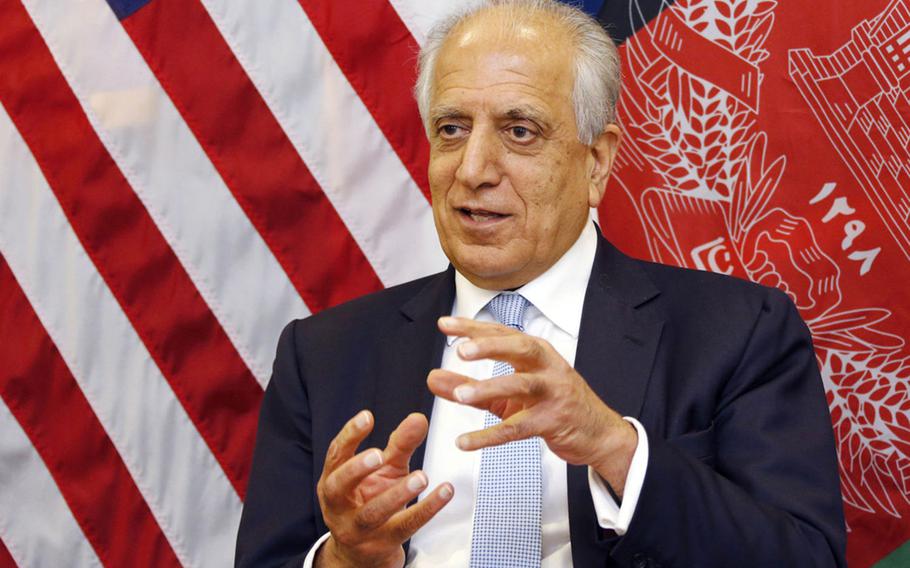 U.S. special envoy Zalmay Khalilzad speaks during a roundtable discussion with Afghan media in Kabul, Afghanistan, in January. U.S. diplomats, led by Khalilzad, will begin the seventh round of their negotiations this week with Taliban officials aimed at ending America’s longest war. (Courtesy of the U.S. State Department)

KABUL, Afghanistan — The U.S. must move away from trying to splinter the Taliban if talks to end America’s longest war are to succeed, analysts said, as the two sides geared up for a seventh round of negotiations.

But actions on the ground and statements by the Taliban indicate that a potential shift in U.S. strategy would run into obstacles, analysts said, days before U.S. diplomats led by peace envoy Zalmay Khalilzad were expected to return to the negotiating table with the Taliban in Doha.

For years, U.S. strategy pursued breaking up the Taliban into divided factions to make it easier to neutralize the militant group, some analysts said.

“If you want them fractured, it’s because you want to defeat them; if you want to bargain with them, you want them united to fulfill their part of the bargain,” said Ashley Jackson, a researcher with the Overseas Development Institute.

But the way the Taliban is structured makes getting factions to leave the group difficult, Abdul Hakeem Mujahid, a member of Kabul’s High Peace Council and a former Taliban leader, told Stars and Stripes.

While the government in Kabul and international forces can promise material goods like bridges and dams in exchange for peace in Afghanistan, they can’t offer fighters assurances they are doing right by God, Mujahid said.

Taliban leadership, on the other hand, gives its rank-and-file fighters both material support and spiritual encouragement, he said, arguing that peace in Afghanistan is best negotiated at higher levels and allowed to filter down through the ranks.

Some at the Pentagon agree that “you don’t want to splinter the Taliban in case you get a deal,” said Jonathan Schroden, director of the Special Operations Program at CNA, a nonpartisan research organization based in Virginia.

Others argue that splintering the group would create pressure on the leadership to bargain, Schroden told Stars and Stripes via Twitter.

But encouraging factions to peel away from the Taliban hasn’t worked, said Kamran Bokhari, founding director of the Center for Global Policy.

“If there’s any peeling away, it’s peeling away in the opposite direction,” Bokhari said, noting that Taliban hard-liners have been flocking to Islamic State and other extremist groups.

That trend could accelerate if the Taliban achieves its immediate goal of getting U.S. troops to withdraw from Afghanistan and compromises with the Kabul government on governing Afghanistan, Bokhari said.

The U.S. also has to trust the Taliban to uphold their end of any deal that’s reached, analysts said. A statement this week by a spokesman for the militant group illustrated some of the difficulties of building that trust.

Hours after the Taliban spokesman in Doha, Suhail Shaheen, said on Twitter that the U.S. had agreed to withdraw from Afghanistan, Khalilzad responded that the U.S. wanted “a comprehensive peace agreement, NOT a withdrawal agreement.”

The outgoing spokesman for U.S. Forces-Afghanistan, Col. Dave Butler, said on Tolo News’ evening broadcast on Wednesday that the Taliban claim was “simply not true” and said the coalition will continue to support Afghan security forces and the “will of the people, which is peace.”

While discussing peace, the U.S. strategy in Afghanistan has included an air campaign targeting Taliban leaders in order to “set the conditions for a political settlement,” said the inspector general’s quarterly report for Operation Freedom’s Sentinel, the official name for the U.S. effort in Afghanistan, which includes both a NATO mission and a counterterrorism operation. The report covered the period from January to the end of March this year.

The U.S. focus in Afghanistan is “bleeding the insurgency in the hopes that Taliban leadership will conclude they’re better off pursuing a deal than pursuing a victory on the battlefield,” Schroden wrote in a post last month on the War on the Rocks website.

Officials estimate there are up to 35,000 full-time Taliban members and as many as 5,000 members of the more extreme Haqqani network branch of the group, the IG report said this spring.

The U.S. needs “across-the-board Taliban buy-in, from top on down, to get a deal with insurgents,” said Michael Kugelman, deputy director of the Asia program at the Wilson Center in Washington. At the same time, the U.S. has to trust that hard-line Taliban won’t sabotage a peace deal, he added.

“There will be ample buy-in within the Taliban ranks to support efforts to negotiate a withdrawal deal with the U.S.,” Kugelman said. “But when it comes to the idea of talks with the Afghan government and other components of a political system that the Taliban has vowed to destroy, then naturally, you’re going to have much less enthusiasm.”