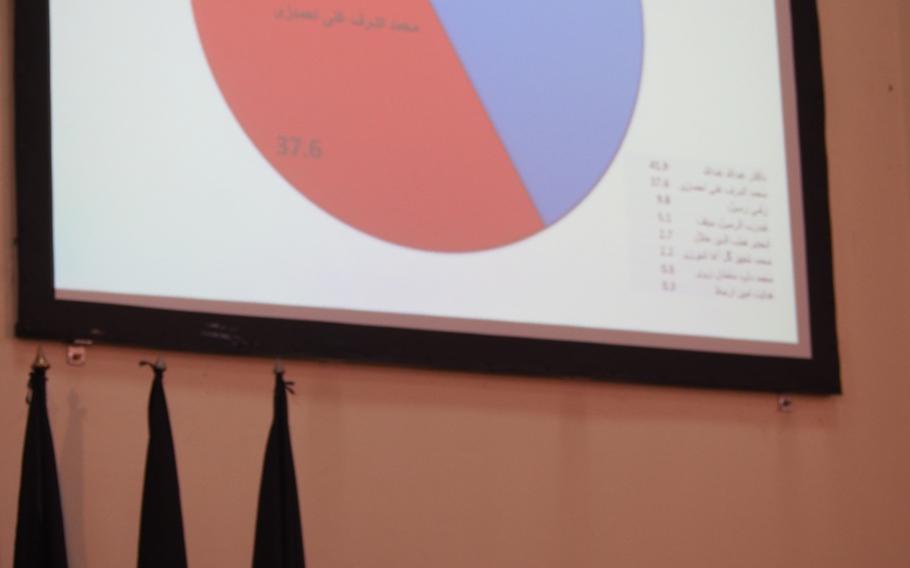 KABUL — The two frontrunners in Afghanistan’s presidential election are locked in a tight race, though neither appears to have received the majority support needed to avoid a second round of voting, according to initial election results released Sunday by Afghanistan’s Independent Election Commission.

The results were based on roughly 500,000 votes from 26 of Afghanistan’s 34 provinces, representing roughly 7 percent of the estimated 7 million votes cast. President Hamid Karzai rival and former foreign minister Abdullah Abdullah has an early plurality of 41.9 percent, with former finance minister Ashraf Ghani taking 37.6 percent. If no one receives more than 50 percent of the vote, the election will go to a run-off between the top two candidates.

Zalmai Rassoul, widely believed to be the favorite of Karzai, took less than 10 percent of the votes in the early count, while Islamist Abdul Rassoul Sayyaf took roughly 5 percent, putting both men far out of the running but perhaps making their support key if there is a run-off.

In a TV interview conducted right after the results were announced, Abdullah held out hope that he could still win outright but cautioned against reading too much into early results.

“Still it’s very early to talk about the second round, and I hope that everyone respects the vote of the people of Afghanistan,” he said.

In a press conference after the initial results were announced, Ghani said the number of votes counter so far is too insignificant to draw conclusions.

The historic election would mark the first democratic transfer of power in the history of Afghanistan, and the next leader will be crucial both to the stability of the war-torn nation and to the U.S. and NATO legacy in the country as international combat troops prepare to withdraw by the end of the year.

Election monitors, though, are raising concerns about the conduct of the government’s two election commissions, who are responsible for counting the votes and investigating reports of irregularities.

After allowing election observers to see the delivery and opening of ballot boxes, they have conducted their initial vote counts in secret, said Naeem Asghari, program manager for the Free and Fair Election Forum of Afghanistan (FEFA), the country’s largest domestic election monitor.

Asghari added the observers from his organization were barred from some polling stations during last week’s vote, and that FEFA has forwarded 3,000 voting irregularities, including ballot stuffing, underage voting, and proxy voting, to the IEC.

“There are lots of concerns,” he said.

IEC Director Mohammad Yousuf Nuristani refuted such criticisms, saying his organization is providing access to monitors and said his organization remains independent of any political pressure.

“This election will be completely transparent and open,” he said, adding, “The IEC will never allow anyone to interfere in our work and we are under no pressure from anyone.”

According to numbers from the Independent Electoral Complaints Commission (IECC), which investigates possible voting irregularities, the number of fraud complaints this year is higher than during the last presidential election in 2009. Of those that have been filed, a higher number have the potential to change the vote counts, according to IECC officials.

At least 1,892 complaints have been filed with enough evidence to warrant an official investigation, and more than 800 of the total complaints are the in the “Priority A” category that could affect the results of the election, IECC spokesman Nadir Muhseni told reporters on Sunday.

Due the number of complaints that have to be examined, Muhseni said there is a chance the investigations may not be done by the time election officials plan to announce full preliminary results on April 24.

On election day, Afghanistan’s cities were largely quiet, but Afghan and U.S. military officials reported heavy violence in rural areas, and the provinces with the most complaints were those in more rural, far-flung areas of the country, according to Muhseni.

“Most of the complaints came from areas with a weak government presence, where monitors could not go,” he said.