Dual cease-fires met with hugs between Taliban and Afghan soldiers Brig. Gen. Abdul Raziq Safi, commander of the Afghan army's 4th Brigade, 203rd Corps, shakes hands with a suspected Taliban fighter on Friday, June 15, 2018, in Logar province's capital of Pul-e-Alam during the first day of a three-day Taliban cease-fire against the government. (J.P. Lawrence/Stars and Stripes)

Brig. Gen. Abdul Raziq Safi, commander of the Afghan army's 4th Brigade, 203rd Corps, shakes hands with a suspected Taliban fighter on Friday, June 15, 2018, in Logar province's capital of Pul-e-Alam during the first day of a three-day Taliban cease-fire against the government. (J.P. Lawrence/Stars and Stripes) Brig. Gen. Abdul Raziq Safi, commander of the Afghan army's 4th Brigade, 203rd Corps, listens to President Ashraf Ghani during an online call on Friday, June 15, 2018, at a base outside Logar province's capital of Pul-e-Alam. (J.P. Lawrence/Stars and Stripes) 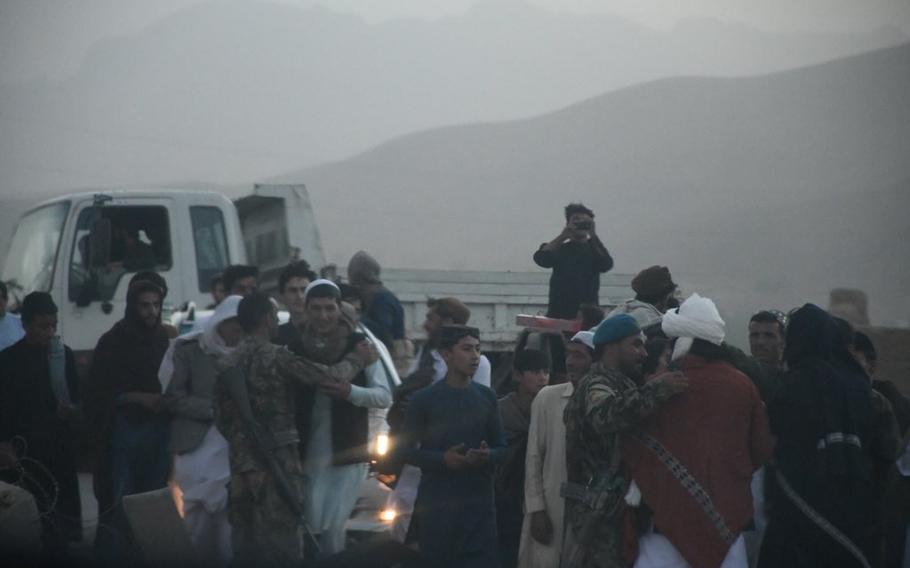 Presumed Taliban militants hug Afghan army soldiers on Friday, June 15, 2018, in Logar province's capital of Pul-e-Alam during the first day of a historic pair of cease-fire orders during the holiest time of year for Muslims. (J.P. Lawrence/Stars and Stripes) Men crowd atop an Afghan army MRAP (mine-resistant ambush protected vehicle), waving the Afghan and Taliban flags on Saturday, June 16, 2018, in Logar province's capital of Pul-e-Alam, the second day of jubilant gatherings there as Afghan military officials, civilians and Taliban militants gathered to celebrate cease-fires announced unilaterally by the Kabul government and the Taliban. (J.P. Lawrence/Stars and Stripes)

PUL-E-ALAM, Afghanistan — The first day of the Eid holiday in eastern Afghanistan brought a strange sight — presumed Taliban fighters walking up to Afghan soldiers at checkpoints and taking selfies with them.

Dozens of armed men believed to be Taliban walked freely through the bazaar in the capital of Logar province on Friday.

Similar gatherings were reported throughout the country and continued into the second day on Saturday. In Logar, young men piled atop an Afghan Mine Resistant Ambush Protected vehicles waving both the Afghan and Taliban flags.

The jihadists appeared to be enjoying the mutual cease-fires declared last week by the Afghan government and Taliban leadership.

U.S. and other foreign forces said they would also abide the temporary truce, part of a gambit to induce the Taliban to lay down their weapons and enter peace talks to end the 17-year Afghan War.

Days later, without acknowledging the Kabul government’s stand-down, the Taliban said they would observe an unprecedented three-day cease-fire during the Eid holiday, which began Friday. The truce does not extend to foreign fighters, the Taliban said.

U.S. forces, meanwhile, are focusing on attacking the local Islamic State affiliate and other militant groups not covered by the cease-fire.

A U.S. airstrike Wednesday in the mountainous Kunar province, near the Pakistan border, targeted the leader of a “known terrorist organization,” said Col. Martin O’Donnell, a military spokesman in Kabul.

Washington had been offering $5 million dollars for information on the whereabouts of the terrorist leader, but U.S. officials in Kabul and Washington would not confirm whether he had been killed in the strike. The mountains of Kunar can be forbidding, which could hamper efforts to verify the strike’s success.

As for the Afghan Taliban, their offensives seemed to wane even before Eid officially began, despite several bloody attacks in the days leading up to the cease-fire. Radmanish said the number of their attacks throughout the country had declined significantly by Wednesday, the second day of the government’s cease-fire.

After the holiday was declared late Thursday, the Taliban stopped fighting, officers in the Afghan army’s 203rd Corps said.

After hearing reports of the Taliban in the bazaar, Brig. Gen. Abdul Raziq Safi, commander of the 203rd Corps’ 4th Brigade, went to check it out.

“They’re 100 percent Taliban,” he said, after getting out of his SUV among a crowd of militants and hugging them.

The crowd, some of whom were more fervent than others, began to chant.

Many of the Taliban’s top leaders are said to live in Pakistan. The Afghans and their foreign bakers have long accused Islamabad of training, supporting and harboring the insurgents. The Taliban, on the other hand, have accused America of being the Kabul government’s puppet master.

Despite the revelry, the 203rd Corps would continue to patrol its area of responsibility in seven provinces south and east of Kabul during the holiday, said corps commander Gen. Showr Gul.

In a call with brigade commanders, Ghani said via webcast Friday evening that the government is hoping for the best — that there will be peace — but is staying vigilant in preparation for the worst.

Ghani also said he was directing his intelligence service to ensure that the Taliban does not use the cease-fire as an opportunity to amass weapons and stage future attacks.

Many Afghans have already called for the cessation of hostilities to be extended. The ebb in violence comes as many war-weary Afghans throughout the country have grown increasingly vocal in calls for peace and as religious leaders have denounced the Taliban’s jihad.

U.S. officials, who are working to bring the insurgents into peace talks with the Kabul government, said before the temporary holiday cease-fire that they’d seen signs some Taliban, too, have grown tired of fighting.

Social media users across the country shared photos and stories of Afghan troops and Taliban militants coming together peacefully for the first time.

In one online video, two large banners with the faces of Ghani and Taliban leader Hibatullah Akhundzada carried the message, “Thank you so much for announcing the cease-fire for the happiness of Afghans,” the Washington Post reported.

Media reported similar scenes in Herat and Wardak provinces, and one report said militants and government officials joined each other for Eid prayers at the same mosque in Kandahar, the Taliban’s spiritual homeland, where it was founded in the 1990s.

In eastern Laghman province, resident Matiullah Atiqi told Stars and Stripes by phone it was like a “double Eid” to see such scenes in towns there and many locals hoped it would lead to lasting peace.

Underlying some of the outward joy was wariness after so much fighting. At the bazaar in Logar’s capital, as Taliban men surrounded Safi’s vehicle, his driver said he would prefer to go to a checkpoint for safety.

“Everyone’s a Talib,” said the driver, Sgt. Maida Gul, throwing up his hands in befuddlement when asked what he thought of the spectacle. He seemed unsure what to make of it all.

“Yes, we have to come together and be peaceful, but this is the first time anything like this has happened,” he said.

Safi, the brigade commander, later admitted he was also uneasy about the Taliban crowd, but got out for selfies so as not to look weak or fearful.

Back at the brigade’s base outside Pul-e-Alam late Friday, a group of Taliban elders came to plead with military and village elders for the release of four young men arrested two days earlier for planting a bomb on the very street where Afghan and Taliban men were hugging and taking selfies.

An improvised explosive device had killed one of the brigade’s battalion commanders two months ago and Safi was reluctant to free the young men.

“This will not be solved today,” the village elders said after some negotiation. “The food is getting cold.”

The men then went off to break bread together. Later, Safi wrote to his commander recommending that the young men be released for goodwill’s sake, but he said he remained leery of the Taliban’s intentions.

Franz J. Marty and Zubair Babakarkhail contributed to this report.