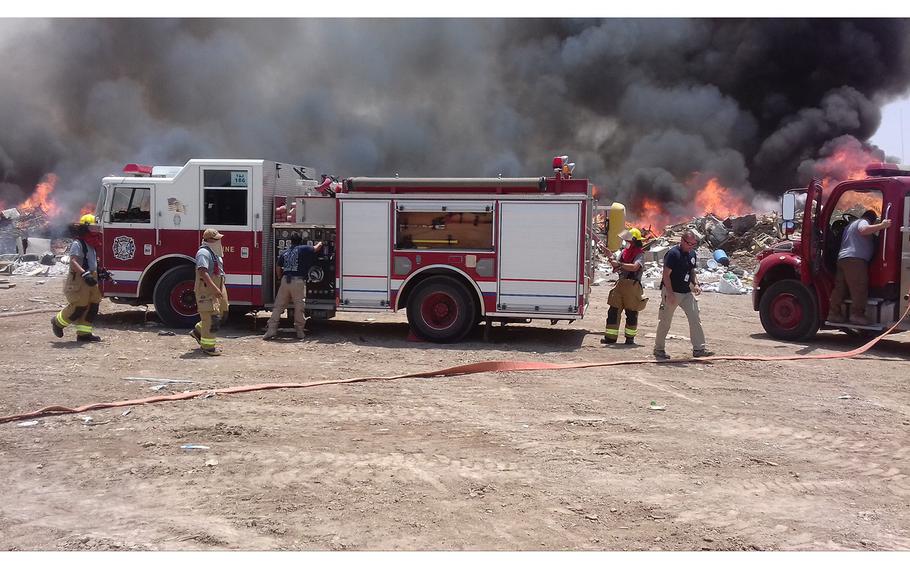 While Katyusha rockets have been the deadliest thing flying over Camp Taji in recent weeks, officials have long been concerned about the threat of potentially toxic burn pit smoke, a government watchdog has found.

“If this project is not funded, solid waste will continue to be dumped in an area … that is not designed to be a landfill; refuse will continue to be set on fire with fumes drifting over Taji Military Complex,” a base official wrote in a February 2018 memo requesting funds to purchase and install incinerators.

The request was repeated in two other memos in 2019, the Defense Department Inspector General said Friday in an audit of the Army’s contract for the base’s dining facilities, housing, electricity and other services, which found that the government “paid $116 million more than necessary” to Reston, Va.-based SoS International LLC, or SOSi, and failed to prevent the contractor from dumping garbage at a site where Iraqis later burned it.

“This solid waste disposal method may have contributed to the exposure of U.S. and Coalition personnel to potential long term health effects from the burn pit smoke,” the IG said.

The U.S. operated out of Taji during the war from 2003 to 2011. It established a new contract for services there in July 2015 after returning as part of the anti-Islamic State coalition, but that contract suffered from “poorly defined contract requirements, inadequate pricing structure, and lack of invoice oversight,” the IG found.

Since 2013, the Iraqi government used SOSi for base services and allowed the contractor to dump garbage at the burn pit site. Though the Iraqi government required the U.S. to contract with SOSi, the U.S. could have done more to make it comply with CENTCOM regulations that require burn pits stop being used after 90 days and once more than 100 U.S. personnel are on site, the IG states.

U.S. and coalition work and living locations, are more than 5,500 feet away from the landfill site and upwind to prevent or minimize exposures, Inherent Resolve said in response to the IG’s findings. But the IG pointed to the three memos written by the base operating support-integrator warning of the potential exposure to fumes from the burning trash, as well as to diseased animals drawn to the landfill.

Incinerators were at Camp Taji as of February 2019, which could have allowed for a cleaner disposal method, but the project to install them was cancelled and Inherent Resolve officials could not explain why, the IG said. An Army official told the IG the Iraqi government hadn’t approved a site for the incinerators yet.

Other problems the IG found with the contract included a pricing model based on the daily population of Camp Taji that left the government paying full price for services even for people who were away on leave or temporary duty. That led to an estimated $36 million spent on services no one used between July 2015 and December 2018, the audit said, though the latest version of the contract has been changed to prevent per-person pricing.

Still, the government “wasted more than $80 million in taxpayer funds” by failing to require the contractor to purchase food and drinking water from the Defense Logistics Agency, as regulations require, resulting in poor food quality, the IG said, citing an inspection of the contractor’s warehouse in February 2019 that found foods like ice cream, yogurt and sour cream that were expired by five months to a year.

Army and Inherent Resolve officials disagreed with elements of the IG audit, in part over the political and legal implications of the burn pit findings. They also argued that they were limited by an Iraqi government exclusive work authorization for SOSi that required the use of a sole-source contract, but the IG stood by most of its findings.

A CENTCOM-compliant incineration plant was funded in October, and once it’s installed the contract will be updated to require using them, officials told the IG. But, that may not completely resolve the problem.