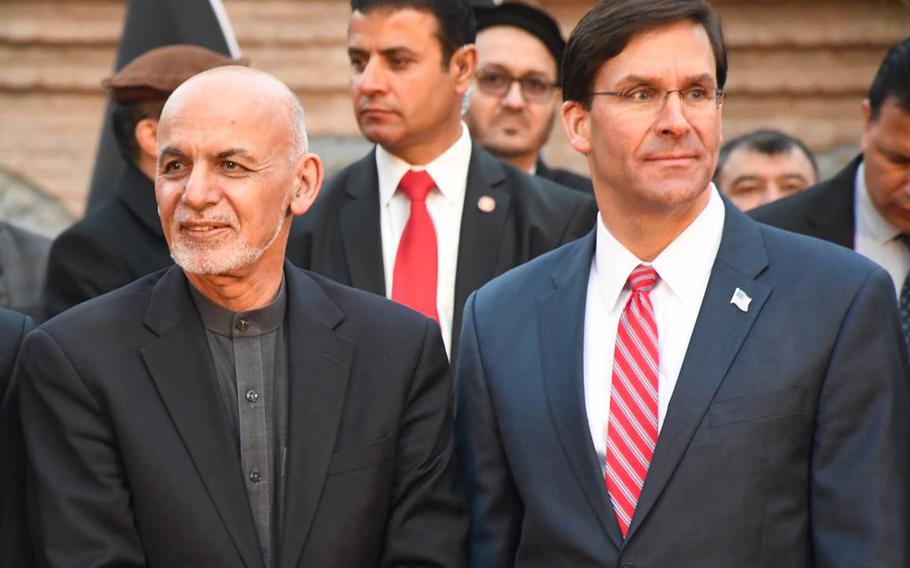 Afghan President Ashraf Ghani, left, and U.S. Defense Secretary Mark Esper attend a ceremony in Kabul on Saturday, Feb. 29, 2020, during which they said U.S. and NATO forces would remain committed to assisting Afghanistan as the country attempts to achieve peace. (Phillip Walter Wellman/Stars and Stripes)

KABUL, Afghanistan — It took less than 24 hours for the U.S.-Taliban deal to hit its first obstacle — the release of prisoners.

The peace agreement signed Saturday in Qatar calls for as many as 5,000 Taliban prisoners and as many as 1,000 pro-Afghan-government prisoners held by the militants to be released by March 10.

Some in Afghanistan said that the Taliban’s refusal to include Ghani in the deal guaranteed some discord from the start and underscored how difficult it will be for Afghan negotiations to bring peace.

“The (prisoner-release) issue already has created a misunderstanding,” said Afghanistan analyst Mohammad Younas Fakor, a former governor of eastern Herat province. “Many of the articles in the U.S.-Taliban agreement still need to be explained.”

The U.S. deal with the militants is clear in broad strokes: If the Taliban prevent terrorists from operating in Afghanistan, stop waging war on the U.S. and its partners, and hold peace talks, the U.S. and the foreign coalition would begin a phased withdrawal that would end in 14 months.

But details of the conditions that would allow U.S. and coalition forces to leave are unclear.

The document says the troop drawdown will be contingent on the Taliban’s fulfilling their counterterrorism assurances and that the militant group needs to “initiate” intra-Afghan talks.

“The agreement is interesting in that it does not say, ‘the U.S. will finally withdraw if the Taliban and the Afghan government reach a full political settlement,’ ” said Andrew Watkins, a senior Afghanistan analyst at International Crisis Group. “There seems to be a lot of legal room for the United States on what the conditionality really means.”

The ambiguity comes amid concerns by some in Afghanistan that the U.S., in its eagerness to end its longest war, might withdraw even if the country forfeits the gains it has made in areas like women’s rights, education and press freedom.

Details on extending a period of reduced violence also were missing from the deal.

The Taliban said a seven-day period of reduced violence last week had ended when they inked the deal; however, U.S. officials have said the deal would be void if violence accelerated.

Ghani on Sunday said Afghan forces would maintain reduced violence levels in the hopes it would lead to a complete cease-fire once the intra-Afghan talks begin.

“Conveying messages underscoring importance of keeping down violence is good,” Laurel Miller, a former U.S. acting Special Representative for Afghanistan and Pakistan, said on Twitter. “But if this is a de facto US condition outside the actual terms of the deal, then there is room for conflicting understandings of what has been agreed.”

Despite the deal’s shortcomings and the argument over the release of prisoners, Michael Kugelman, deputy director of the Asia program at the Wilson Center in Washington, said it was too early to judge the accord.

“You can be critical all you like; it is certainly an imperfect deal,” Kugelman said. “But at the end of the day, this deal puts Afghanistan in its best position ever to launch a peace process and end this war.”