Despite mission success, US operations in Iraq will continue 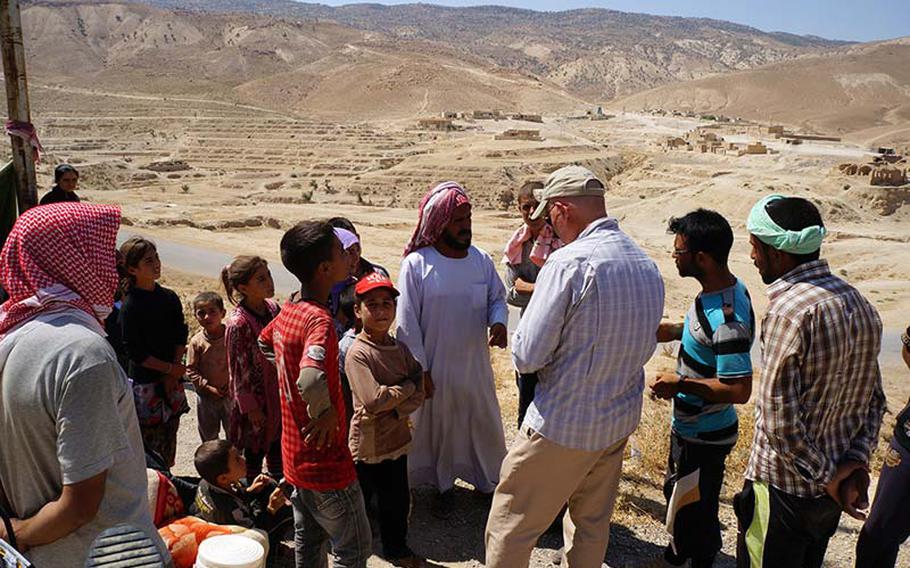 A member of the U.S. assessment team on Sinjar Mountain is greeted by locals near Sinjar, Iraq, on Aug. 13, 2014. The team helped determine the impact of current U.S. humanitarian assistance efforts and whether additional supplies or assistance were required. (U.S. Central Command)

A U.S. assessment team consisting of fewer than 20 troops and U.S. Agency for International Development staff spent Wednesday on Mount Sinjar, where thousands of Yazidis and others had taken refuge after Islamic State fighters overran their towns and villages.

The team reported fewer displaced people than expected and that their conditions were not as dire as feared.

The Obama administration had been contemplating a military-led rescue of civilians from Mount Sinjar because tens of thousands of mostly Yazidis were believed trapped there.

But the U.S. team estimated the number of Yazidis on Sinjar was now “in the neighborhood of 4,000,” and about half of those are local residents who live there and have no plans to leave, according to Pentagon spokesman Rear Adm. John Kirby.

The number of stranded Yazidis has shrunk significantly because thousands of them were able to leave each night over the last several days, Kirby said.

The Pentagon now sees little if any need to airdrop more food and water to Iraqis atop Sinjar because the remaining people have enough supplies.

The improved situation makes it less likely that U.S. troops will need to conduct a major rescue effort, according to officials.

Obama said Americans should be proud of the successful efforts to assist the Yazidis. Over the past week, U.S. airstrikes pushed militants back from the mountain, and American air drops delivered 114,000 meals and more than 35,000 gallons of fresh drinking water to those trapped there.

Obama interrupted his vacation on Martha’s Vineyard to warn Americans that the situation in Iraq remains dire overall and that the U.S. still has a role — without having combat troops on the ground — in combating the Islamic State, which has taken over large swaths of the country, slaughtered members of religious minorities and sought to impose a fundamentalist religious state.

“The situation remains dire for Iraqis subject to [Islamic State’s] terror around the country,” Obama said. “We will continue airstrikes to protect our people and facilities in Iraq.”

However, Kirby suggested that further humanitarian operations are not imminent.

Obama said that the majority of the troops who conducted the assessment will be leaving Iraq “in the coming days”, but Kirby suggested that some will remain in Irbil at a joint operations center that was set up in July.

The administration has been hoping that a new, inclusive government in Baghdad will be successful in luring Sunni Muslims away from the Islamic State. On Thursday, Prime Minister Nouri al-Maliki announced he will abandon his quest for a third time and will step aside in favor of Haider al-Abadi, who was tapped by the Iraqi president to form a new government.

The U.S., Iran and other governments had been urging al-Maliki to relinquish power, believing his authoritarian policies had encouraged support for the Islamic State.