Defense spending bill would rein in US troop drawdown from Afghanistan 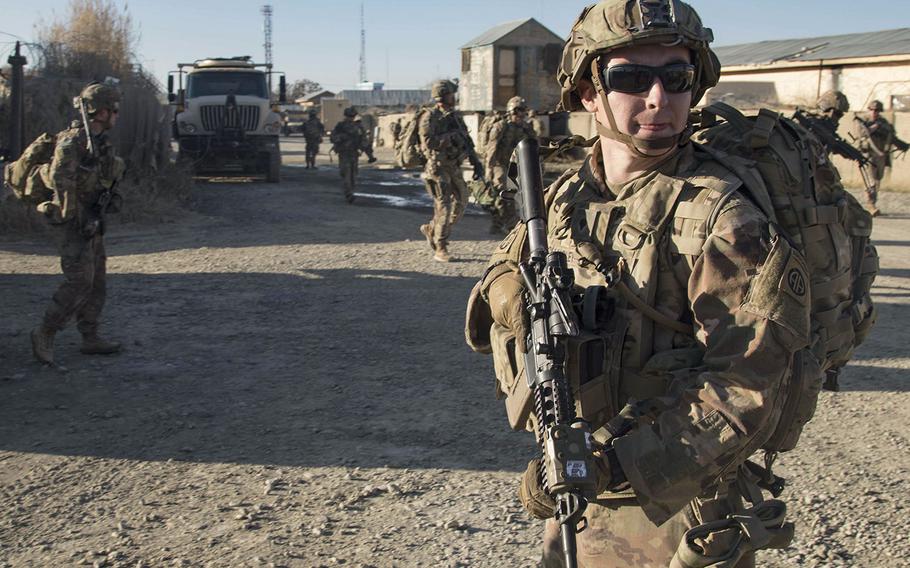 Paratroopers from the 82nd Airborne Division ensure the area is secure during a fly-to-advise mission in southeastern Afghanistan in December 2019. A measure has been included in the final version of the defense bill to prevent the further withdrawal of U.S. forces from Afghanistan without input from the Pentagon and other government agencies. (Alejandro Licea/U.S. Army)

KABUL, Afghanistan — U.S. lawmakers have moved to block the Trump administration’s rapid drawdown of American forces from Afghanistan, with a measure in the 2021 National Defense Authorization Act that would require input from other government agencies before more troops can be withdrawn.

The number of U.S. troops in Afghanistan has dropped from roughly 13,000 at the start of 2020 to around 4,500 last month, as President Donald Trump tries to make good on a 2016 campaign promise to extract the U.S. from its longest war.

While Trump suggested in October that all U.S. troops could be home by Christmas, that looks unlikely.

The measure in the NDAA, which sets out the military budget for 2021, authorizes Congress to withhold funding for further reductions unless the Pentagon and other agencies submit a report detailing how having fewer U.S. troops in Afghanistan could impact U.S. national security and other issues.

Such a report would be required before troop numbers drop below 4,000, or whatever the total number is when the bill becomes law, and again before numbers dip below 2,000, the bill says.

“The Administration has a constitutional obligation to provide the Congress and the American people with regular, timely, and comprehensive information on the status of security operations and diplomatic efforts in Afghanistan,” said a report released Thursday as House and Senate negotiators reached agreement on a final version of the bill.

After recently reducing the number of Americans deployed to Afghanistan to about 4,500, acting Defense Secretary Christopher Miller announced last month that a further reduction to 2,500 will be completed by mid-January, just before Trump leaves office. Senior military officials have said conditions don’t warrant fewer troops than that.

Any future troop reductions should come in coordination with allies and the Afghan government, the report said.

The interagency assessments called for in the NDAA would include analyses of how further troop reductions could affect the U.S.’s ongoing counterterrorism mission in Afghanistan, the likelihood that terrorist groups could exploit the drawdown, and numerous other issues.

The NDAA also requires regular assessments of whether the Taliban is complying with the deal it signed in February with the U.S., which called for the complete withdrawal of international forces from Afghanistan by May if the insurgent group met certain conditions. Among those was severing ties with groups like al-Qaida and preventing such groups from using Afghanistan to conduct terrorist attacks.

The compromise bill is expected to head to the House and Senate floors for votes next week before it goes to the White House for Trump’s signature.

The president has threatened to veto the bill unless it includes language that repeals a section in the 1996 Communications Decency Act, which shields social media firms from liability for user content, and if it contains a provision to remove Confederate officials' names from military bases.

But given the broad bipartisan support the bill has, it may be voted into law with a veto-proof majority.