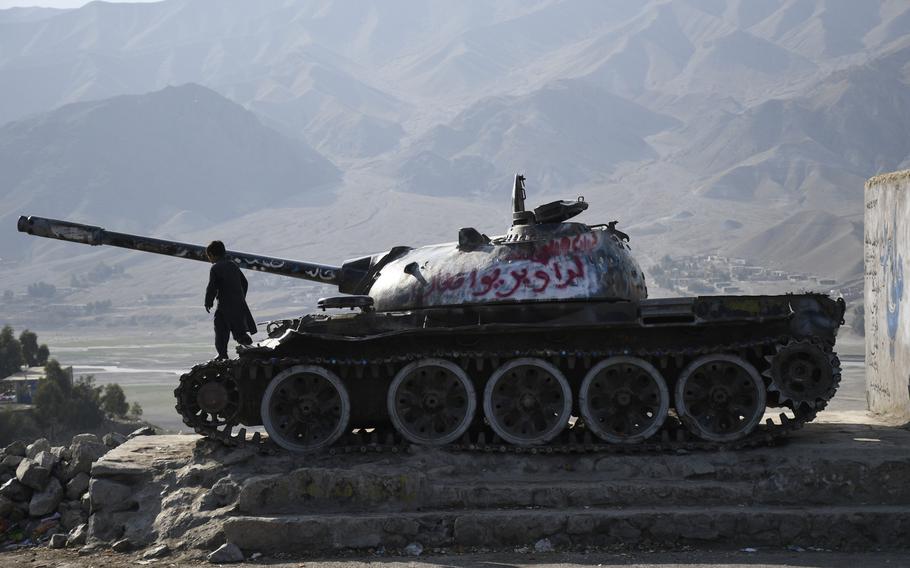 Buy Photo
A boy plays on an abandoned Soviet tank on a side of a highway east from Kabul, Afghanistan, on Feb. 22, 2020, the first day of a declared period of reduced violence in the country. (J.P. Lawrence/Stars and Stripes)

KABUL, Afghanistan — Growing violence since the signing of the U.S.-Taliban peace agreement contributed to a first-quarter death toll of over 500 civilians in Afghanistan, the United Nations said Monday.

The deaths highlighted an “urgent need” to protect civilians from the conflict, especially in light of a worsening coronavirus outbreak across the country, the U.N. said in a report.

Overall, civilian deaths and injuries in the conflict were down for the first three months of the year, marking the least bloody first quarter since 2012, but that was largely attributed to fewer attacks in weeks leading up to the deal’s signing on Feb. 29.

The agreement, which outlined a conditional withdrawal of U.S. and other foreign forces to be completed by mid-2021, was expected to bring markedly less fighting and peace talks between insurgent and government representatives. Instead, the Taliban has resumed attacks against Afghan forces.

“UNAMA is gravely concerned with the acceleration in violence observed in March and the consequent increase in the number of civilian casualties and harm caused,” the new report said.

From January through March, the U.N.’s Assistance Mission in Afghanistan documented 533 civilians killed and 760 injured in the fighting, a 30% decrease from the same period last year.

But while significantly fewer casualties were attributed to the Taliban in January and February, compared to the same months last year, the group was deemed responsible for 40% of all casualties during the quarter, largely due to the March spike in attacks that exceeded last year’s numbers for the same month, UNAMA said.

Overall, the Taliban and other militant groups like the local Islamic State affiliate were blamed for 55% off all civilian casualties, while Afghan government forces and their allies were said to have caused about one-third of the casualties. The remaining 13% were unattributed.

Ground fighting caused the most civilian casualties — nearly a third of the total — followed by targeted killings and improvised explosive devices other than suicide attacks, UNAMA said. An uptick in assassinations and summary executions brought 20% more deaths attributed to the militants than the same period last year.

More than 400 child casualties, of which over 150 were deaths, were of particular concern to U.N. observers, who blamed the bulk of those deaths and injuries on pro-government forces, largely from airstrikes.

But while the Taliban have accused the U.S. of violating February’s deal by conducting “brutal drone attacks and other bombings” in civilian areas in recent weeks, UNAMA found the last civilian death or injury attributed to international forces during the period was on Feb. 17, more than a week before the agreement was signed.

The Taliban accused the U.N. of trying to conceal what it alleged in a statement were Afghan and American crimes.

The U.S. military in Afghanistan didn’t immediately respond to a request for comment, but it routinely rejects UNAMA’s methodology.

The report called on both sides to stop fighting to protect civilians from further conflict and the growing coronavirus outbreak, which has caused more than 40 deaths in the country. More than 1,300 people have tested positive for the disease there.

The Taliban have so far rejected the Afghan government’s appeals for a cease-fire during the pandemic.