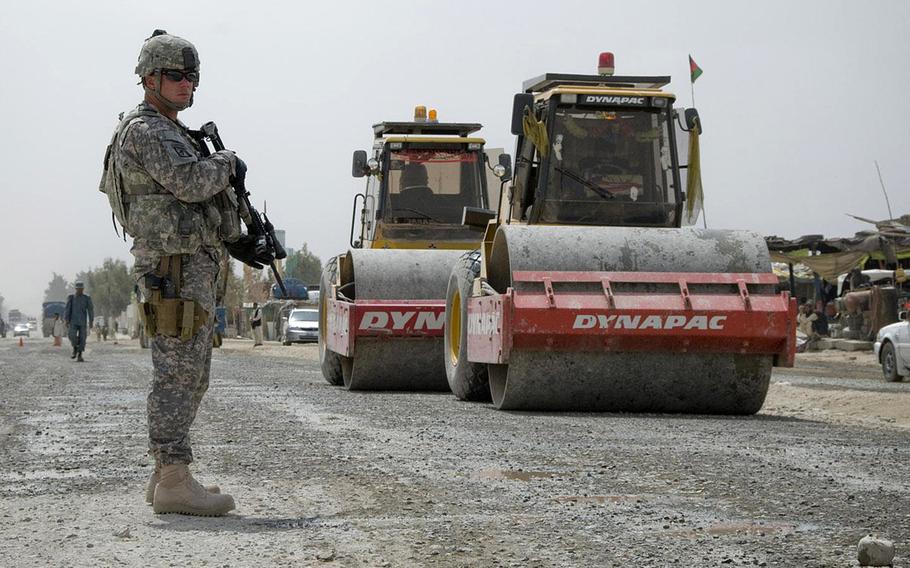 Sgt. Randy Elmore, 525th Battlefield Surveillance Brigade, secures a reconstruction project along Highway 4 in Spin Boldak, Afghanistan, in 2011. The construction was funded through the Commander's Emergency Response Program. Lawmakers have directed the military to stop the multibillion-dollar program. (U.S. Army)

Sgt. Randy Elmore, 525th Battlefield Surveillance Brigade, secures a reconstruction project along Highway 4 in Spin Boldak, Afghanistan, in 2011. The construction was funded through the Commander's Emergency Response Program. Lawmakers have directed the military to stop the multibillion-dollar program. (U.S. Army) 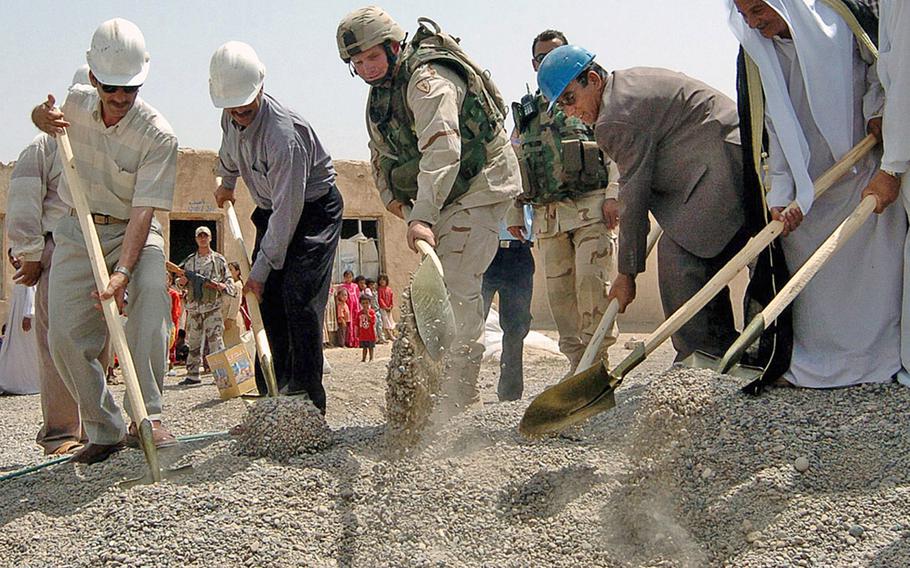 Capt. Whitney Campbell, center, commander of Battery C, Task Force 2-11 Field Artillery, participates in a ceremony in 2004 for the Kharabrud elementary school, which was funded through the Commander's Emergency Response Program. Lawmakers have directed the military to end multibillion-dollar program used in Afghanistan and Iraq. (Sean Kimmons/U.S. Army) 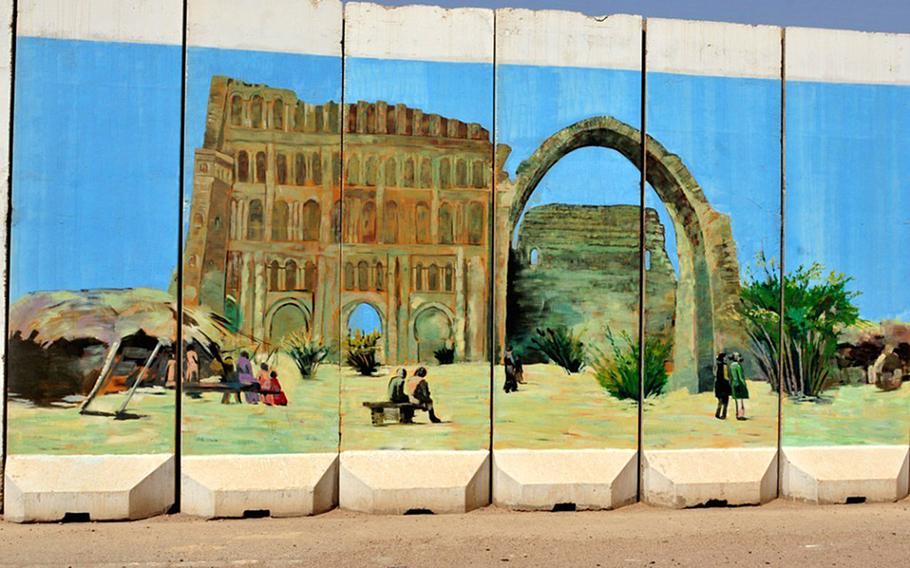 Murals adorn the protective T-walls leading to Contingency Operating Base Basra in 2011. The paintings were done by local Iraqi art students using funds from the Commander's Emergency Response Program. Lawmakers have directed the military to end the program used in Afghanistan and Iraq. (U.S. Army)

KABUL, Afghanistan — Lawmakers want the military to end a multibillion-dollar program meant to win over the people of Afghanistan and Iraq through cash and work projects.

The Commander’s Emergency Response Program, which gave $3.71 billion to commanders in the field to disperse through small grants, is to be phased out this year, lawmakers on the House Appropriations Committee have said.

“The Committee believes that after nearly two decades the time has come to wind down this program,” it stated in congressional minutes in July, as cited in a recent report by the Special Inspector General for the Reconstruction of Afghanistan.

Committee lawmakers added the recommendation to end CERP into the annual defense funding bill and expect the Pentagon to comply, a House Democratic aide who insisted on anonymity to speak freely about the matter said Thursday.

The Office of the Secretary of Defense did not immediately respond to phone and email questions about the program.

U.S. forces in Afghanistan have yet not received orders on ending CERP, a defense official said Friday on condition of anonymity because they were not authorized to speak on the matter.

CERP had been a key part of the military’s counterinsurgency strategy, which was focused on winning the support of local populations away from insurgents in Iraq and Afghanistan. But the program was always plagued by misuse and a lack of direction, analysts and government watchdogs said.

“The initial intention behind CERP was a good and benevolent idea: give small amounts of funding directly to military units/commanders to help local populations and engender goodwill in their area of operations,” said Jonathan Schroden, special operations program director at the Center for Naval Analyses, in a Twitter direct message.

“However, like many US efforts in Iraq and Afghanistan, it suffered both from structural flaws and misuse over time,” Schroden said.

Military commanders had inadequate training, and the money they spent on projects such as schools and roads was highly vulnerable to fraud and corruption due to a lack of oversight, a Government Accountability Office report said last week.

Analysts also found evidence that some aid spent by the U.S. military led to more violence. Resistance groups, understanding that aid projects would bolster popular support for the government, had an incentive to attack the projects and punish anyone who participated in them.

CERP was beneficial when military commanders were adequately trained and dollar amounts were small, a Rand Corp. study in 2016 found.

The end of CERP comes as the Biden administration considers whether to keep to a May deadline for withdrawing U.S. forces from Afghanistan, in line with a conditional deal signed with the Taliban last year.

Other counterinsurgency programs have ended during the past year, such as the Afghanistan-Pakistan Hands program, which taught troops local languages in order to create regional experts.

The U.S. military is switching its strategic focus away from counterinsurgency wars and toward potential conflicts with major powers such as Russia and China, said Andrew Watkins, a senior Afghanistan analyst at International Crisis Group, a nonprofit think tank based in Brussels.

“The termination of CERP seems to be a nail — if not the final, definitely a notable one — in the coffin of population-focused counterinsurgency,” Watkins said.