Confessions of a Mosul militant 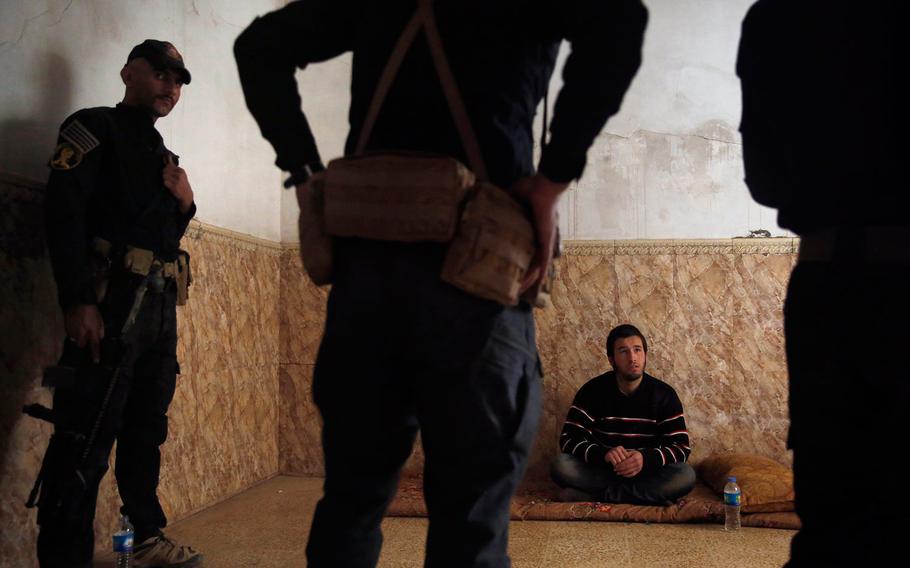 A man caught crossing the frontline in Gogjali, Iraq, admits to being an Islamic State fighter in the presence of soldiers detaining him on November 8, 2016. (Carolyn Cole/Los Angeles Times/TNS)

GOGJALI, Iraq — The pudgy Islamic State fighter was wearing a short beard, sweater and jeans when troops caught him crossing the front line with civilians in east Mosul on Thursday and ushered him into an abandoned house for questioning.

He admitted to being a militant.

“They forced me,” said Omar Ahmed.

After he was detained and questioned Thursday, Ahmed agreed to speak with a reporter and interpreter from the Los Angeles Times and to be photographed by the paper. He was not restrained, soldiers did not coerce him into talking or prompt him to answer, beyond clarifying questions. Gunfire sounded outside during the interview, because of the proximity to the front line, but Ahmed did not express concern about his safety or ask to leave.

Ahmed, 21, a native of Mosul’s eastern, middle-class Zahra neighborhood, said he was a reluctant militant.

“In the beginning, I refused the idea. I refused them,” he said, his voice calm and even. “I was not convinced. I was accused of being an apostate.”

But once Islamic State came to power, he said, “I became obliged.”

Ahmed said he declared his allegiance to the “caliphate” on March 18 at Mosul’s Mohammed Abd Wahhab mosque, named after the preacher who founded the extremist Sunni movement of Wahhabism.

“I was supposed to become Islamic State police inside Mosul, not on the front lines,” he said as he sat on the floor of an empty room, facing several Iraqi special forces soldiers. “I would prefer to be a policeman, not to kill people, not to get my hands bloody.”

Instead, he was sent to fight, first in an Islamic State province in Syria, then in Mosul.

Ahmed said he did not kill anyone, “not at all, just one mortar. The mortar went into the river.”

He described Islamic State forces as organized along military lines, with brigades and battalions as well as special forces and suicide bomb squads.

But he noticed cracks in the facade. While he was stationed in Syria earlier this year, near the Iraqi border, fighters disappeared.

In Mosul, where he served more recently, he said, Islamic State administration was better.

“They are taking care of their fighters. If someone needs a leave, they will give it to him,” Ahmed said. “Fighters in Mosul have high morale. Most people who have low morale, it’s because of the airstrikes.”

Ahmed said airstrikes have taken a toll on militants.

“They will be besieged and they will be upset and they will want to get out, so they will have fights between them,” he said. “If the airplane will just come without striking, if someone is outside you will see fighting and firing between fighters.”

On Wednesday, he said his father urged him to surrender. The older man approached an Iraqi army officer and said, “I have someone who’s with Islamic State.”

But then he said his father changed his mind, telling him not to talk to soldiers.

“Don’t go and give up now, because they will think that you are going to attack them,” he recalled his father saying.

“My dad told me just wait until the army comes and civilians leave their houses and are welcoming the army, then you can go and give up,” Ahmed said.

On Thursday, he said, “I gave up. I surrendered.”

“He’s lying,” Moala said. “We got some wounded here and then our soldiers saw someone was coming toward the road behind the clinic.

When we were questioning him, (turns out) he was Daesh,” the lieutenant said, using the Arabic acronym for Islamic State.

He said Ahmed had posed as a civilian. He had tried to slip past them with a crowd of others toting white flags at the field clinic a few yards away, next to a berm separating the village from Mosul’s Malayeen neighborhood, where mortar rounds were still flying.

“He was pretending to be a displaced person because of the operation on that side, like he was lost. Then we saw him close to the clinic,” Moala said.

He turned to Ahmed.

“You said before when I was questioning you that your dad was encouraging you to be Daesh,” he said.

Before the meeting with the captive, soldiers had directed The Times reporter and photographer to the charred remains of two Islamic State fighters. Soldiers claimed that the pair had been armed with a machine gun, and that they had killed them as the fighters fled after attempting to assist a suicide bomb attack. There was no sign of the machine gun, which soldiers said they had removed.

Iraqi officials also have an incentive to keep Islamic State captives alive as informants. Ahmed was still being held late Thursday, according to Moala and a special forces commander.

“He will have good information,” he said.