Can a company founded by Army veterans rise above a recent saffron slump? 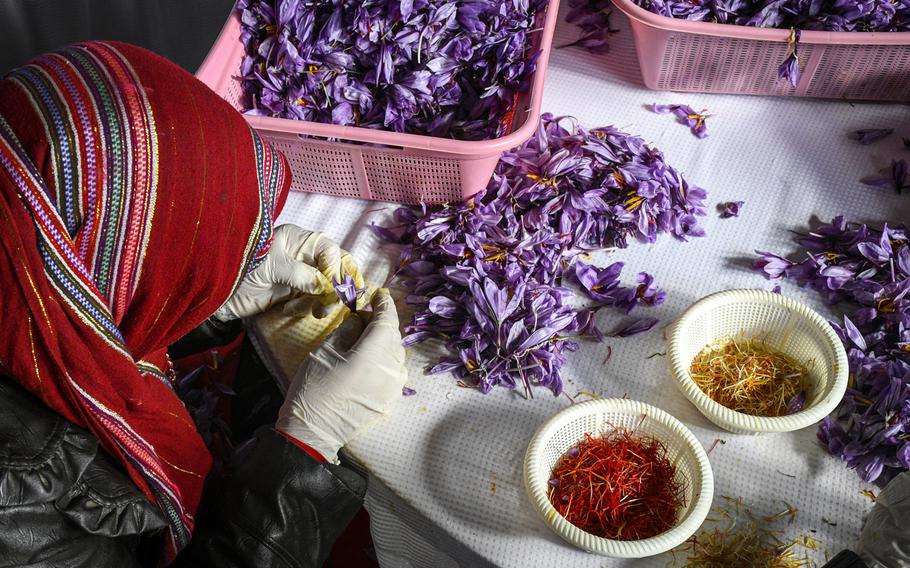 A woman inspects red stigmas from a purple crocus flower for impurities Nov. 14, 2018, in Herat, as part of a process of refining saffron, sold as the most expensive spice in the world. (J.P. Lawrence/Stars and Stripes)

HERAT, Afghanistan – About a dozen children clambered over a low wall into a field of purple flowers and began plucking buds from their rubbery stems, harvesting the “red gold” that might one day be served at a fancy American eatery.

As they worked, the sound of snapping flower heads filled the air — the only sound besides the occasional rumble of attack helicopters at a nearby range. Nadir Khan Alizai, 55, watched as his son, 3, mimicked his older brothers canvassing the rows of flowers. His daughter, 4, hopped a furrow and wandered off holding a blossom.

The greying village elder once grew opium poppies, but a decade ago switched to crocus, from which saffron is made.

The most expensive spice in the world, it can sell for up to $4,000 a pound. His family operates one of 400 farms that sell part of their harvest to Rumi Spice, a million-dollar company founded by U.S. Army combat veterans. Still, this year, prices for his saffron have fallen due to factors outside his control.

“I’m just a farmer, I don’t know why the prices went down, I just know it depends on the government and the mafia,” Alizai said.

The Americans see their business as continuing a mission they started in the military, but its rise comes as trafficking from Iran, counterfeiting and other growing pains for Afghan farmers threaten to undo progress in the fledgling saffron trade here.

Made from hand-picked flower stigmas, saffron is coveted as a seasoning in teas and rice dishes, as a dye in textiles, a fragrance in perfume and in medical applications. The legal cash crop is credited with helping Herat kick its opium-growing habit and giving jobs to vulnerable women.

But recent upheavals may force some to return to the poppies that have helped fuel the 17-year Taliban insurgency. And despite the backing of a billionaire and testimonials from award-winning chefs, Rumi Spice’s success remains tied to the conditions in a volatile country gripped by insurgency and corruption.

Still, the veterans hope commerce can win entrenched battles that combat couldn’t win on its own.

The rise of Rumi SpiceWhile saffron growing has a long history in Afghanistan, it fell out of favor during decades of war, until refugees returned home from Iran after the Taliban fell in 2001 and began cultivating it near Herat. The flower thrived in the dry soil and cultivation was spurred by ample government and international aid.

Keith Alaniz got the idea to sell the aromatic red saffron threads to Americans while deployed to the country from 2011 and then again in 2013. He was inspired by a local farmer who struggled to find overseas buyers for the spice, which remains pricey because of the labor needed to harvest and process it.

While he keeps a wary eye on news of growing insecurity, Alaniz believes business investments are critical for Afghanistan’s future.

“It’s impossible to reconcile that the last 10 years of my life were dedicated to a fruitless cause,” he said. “I believe the mission will be completed through the private sector, and I believe veterans are well positioned to do that.”

A former Army engineer turned regional expert in the military’s Afghanistan-Pakistan Hands program, Alaniz teamed with two fellow Army veterans to start the business in 2014. Billed as a luxury brand, Rumi Spice saffron runs $9 per half gram jar or $170 for a one-ounce “bulk” order in a small tin.

Some earnings get reinvested into social causes, such as creating jobs for women. Its three saffron processing centers in Herat employs some 250 women — war widows and others displaced by drought — to hand-pluck crocus stigmas.

The women earn about $2 a day, Alaniz said. That’s more than double what a study earlier this year found most Afghans live on.

Economic development remains crucial to long-term stability in Afghanistan, both to improve livelihoods and to help fill government tax coffers to fund defense and security costs, most of which U.S. taxpayers now foot.

Rumi Spice has poured some $120,000 into training and equipment here in the past two years, Alaniz said.

It also holds suppliers to U.S. agricultural standards, such as labor laws that allow young children to work only on family farms and only outside school hours.

It’s now one of five companies with meaningful sales out of some 30 saffron companies in the province, agriculture officials in Herat said. They said the Chicago-based firm is the largest importer of the spice to the United States.

Alaniz now hopes to build a local packaging facility and expand the product line to include wild cumin growing on the country’s mountainsides, which he said could go for 10 times the domesticated variety.

A rising underdog and a shadowy underworldThe company’s rise parallels Afghanistan’s emergence as an underdog to compete with neighboring Iran, the world’s largest supplier of the spice, which has struggled against U.S.-imposed banking and trade restrictions that barred legal exports of its vast supply of saffron to the West.

Those sanctions and a weakened currency have led Iran to flood Afghan markets with its crop to skirt the restrictions and suppress vulnerable competitors across the border, locals and experts said.

“The stagnation of Afghan saffron prices, that’s the perverse effect of blocking the saffron from Iran,” said Philippe De Vienne, a 30-year veteran spice hunter and CEO of Epices De Cru, a Montreal-based spice company that purchases from Rumi Spice. “That is a shame because good Afghan saffron is a great product.”

Smuggled and counterfeit spice is glutting local markets and getting shipped abroad, officials in Herat said, citing data that showed saffron exports exceeded production last year, even with half the crop remaining in the country.

Industry experts blamed Iran’s interference for a sharp fall in wholesale prices, which hurts farmers who invested heavily in the crop a few years ago amid what looked to be a boom, with rising prices and talk of Chinese markets opening.

To fuel its growth, the industry has for years sought inroads into new foreign markets like the U.S., where Iranian imports have long been barred but still enter, labeled as Spanish saffron. The average consumer has no way to know the difference.

“It’s a very opaque industry,” said Alaniz, who believes Americans may have been turned off by low-quality and fake saffron, such as imitations made of horse hair, shredded paper or safflower — an unrelated red thistle flower.

Alaniz and others have sought to compete by positioning Afghan saffron as a premium spice through ethical sourcing, rigorous quality standards and greater transparency. Rumi Spice doesn’t take secondhand saffron and processes its crocus buds in a carefully controlled environment to prevent contamination, for example.

The government has also stepped in to protect the industry by trying to ban all saffron imports, even small amounts previously allowed to be carried from Iran.

Meanwhile, Afghan saffron exports to the U.S. have jumped from one kilogram in 2008 to 845 kilograms last year, United Nations figures show.

Production has shot up in the same period, more than doubling since 2015, according to government data.

But farmers have seen prices flatten and then fall off one-third from their peak three years ago.

Opportunities in China have not materialized, said Abdul Saboor Rahmany, Herat province’s agricultural chief, and lower prices may be the norm for a while. Growers still earn more than they would from wheat or onions, he said, but “when the price decreases, the benefits decrease.”

Some farmers say that for the trouble they face from armed saffron-runners and declining prices, they might as well be in the more lucrative illicit drug trade.

“If the situation doesn’t change, I’ll go back to cultivating poppies, even if I get killed,” said Abdul Reza, a saffron farmer. “When guns rule the land, only the farmers and the poor suffer.”