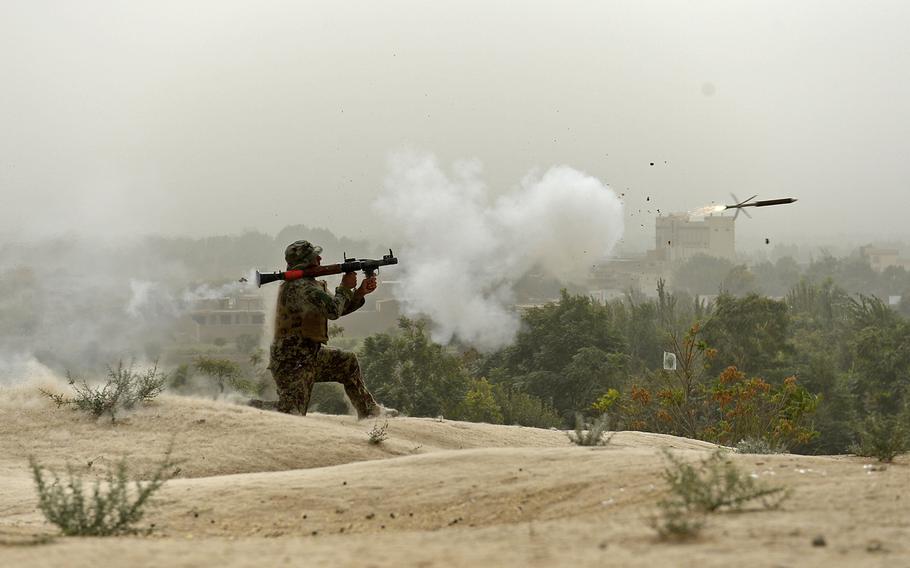 An Afghan soldier fires a rocket-propelled grenade at Taliban positions on the outskirts of Kunduz during mop-up operations in October 2015. There are fears that Afghanistan could be on the brink of its deadliest fighting season this spring, with the Taliban warning of violence and bloodshed in the months to come. (Josh Smith/Stars and Stripes)

The incident occurred in Nahar Kohna village in the Dasht-e-Archi district of northern Kunduz. The would-be bombers were linked to the Taliban, the ministry said in a statement.

News of the botched attack came the day after Afghan forces arrested a top Taliban official in the province, where the insurgent group recently launched an offensive in an attempt to recapture Kunduz city.

The group briefly occupied Afghanistan’s fifth-largest city last year — the first major urban center to fall under Taliban control since they were ousted in the 2001 U.S. invasion.

A local official said Monday that many villages in Kunduz’s Dasht-e-Archi district had been cleared of the Taliban, but holdouts remained in some of the rural villages. Operations were underway to remove them, local police spokesman Hijratullah Akbari said.

Also on Tuesday, U.S. Forces-Afghanistan announced that it was seeking information about eight other insurgents from the Haqqani network and Taliban that were “known to be planning attacks on the Afghan people” in four provinces, including the capital.

Officials were seeking information about the suspected plotters, the command said: Hayatullah, Mullah Mushfiq, Sangari and Faruq in Parwan; Tila Khan and Mansour in Khost; Hamdard-Hasib in Kabul; and Talha in Logar.

The announcement of an attack being planned in Kabul came a week after a massive complex suicide bombing outside Afghanistan’s main intelligence agency killed 64 people, including many civilians.

Afghans have expressed anger and resolve in the wake of the bombing. Afghan President Ashraf Ghani vowed Monday that the government “will now use all its resources to defend the country.”