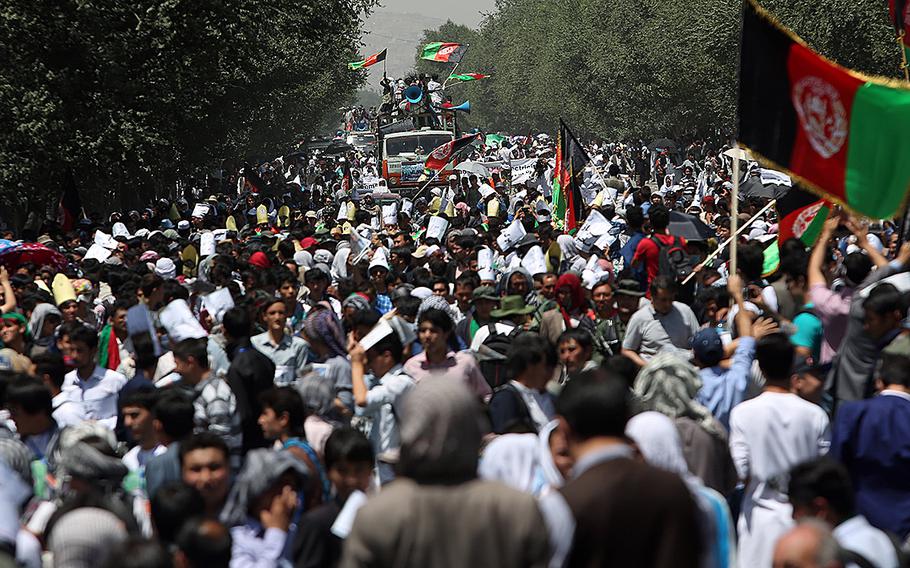 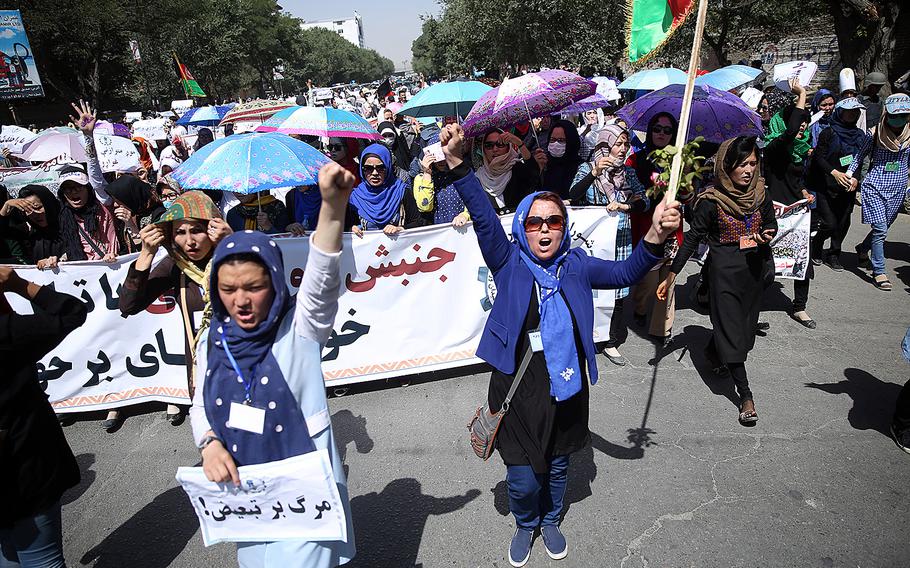 Thousands of demonstrators march towards the center of Kabul, Afghanistan, on Saturday, July 23, 2016, before a deadly blast struck the demonstration area. (Massoud Hossaini/AP) 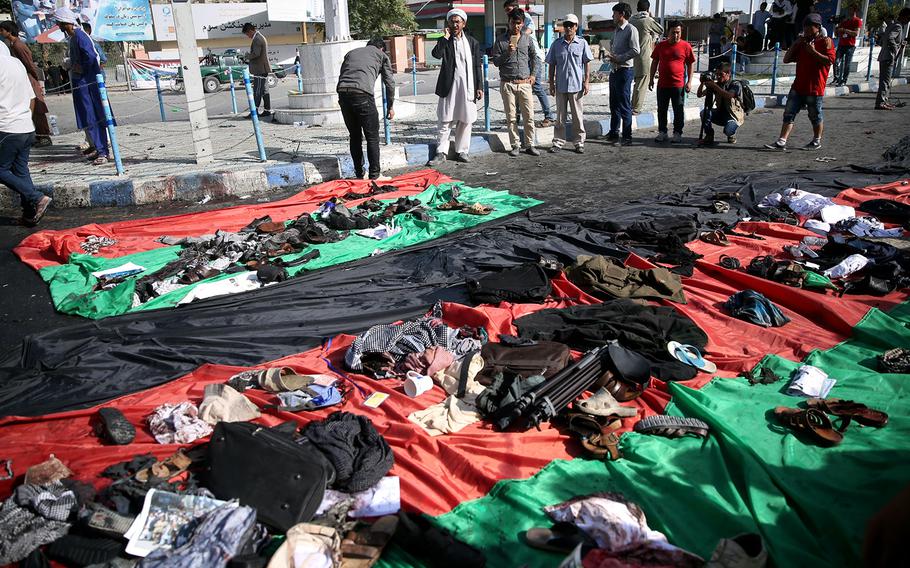 Afghans look at property left behind by victims of an explosion that struck a protest march in Kabul, Afghanistan, on Saturday, July 23, 2016. (Rahmat Gul/AP) 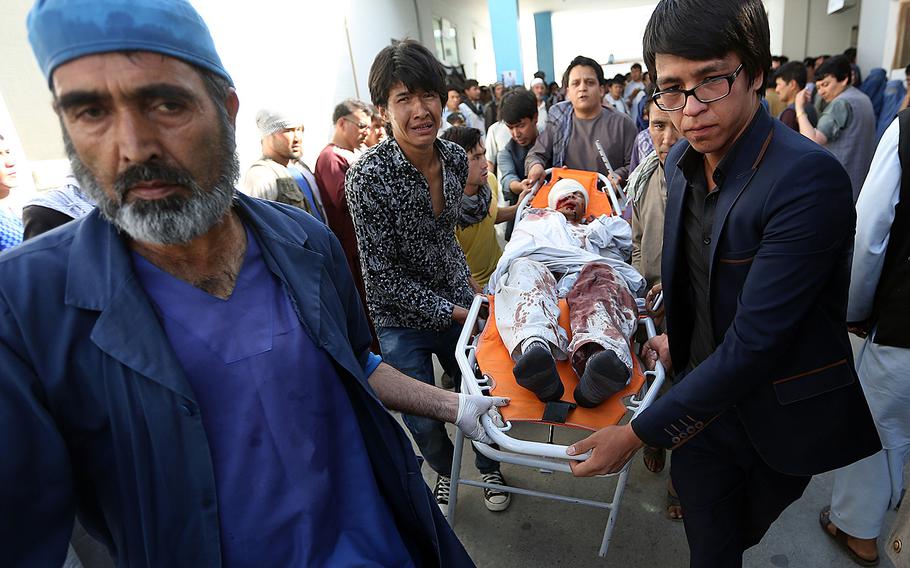 An injured man is taken to a hospital in Kabul, Afghanistan, on Saturday, July 23, 2016, after a deadly explosion struck a protest march by ethnic Hazaras. (Rahmat Gul/AP) 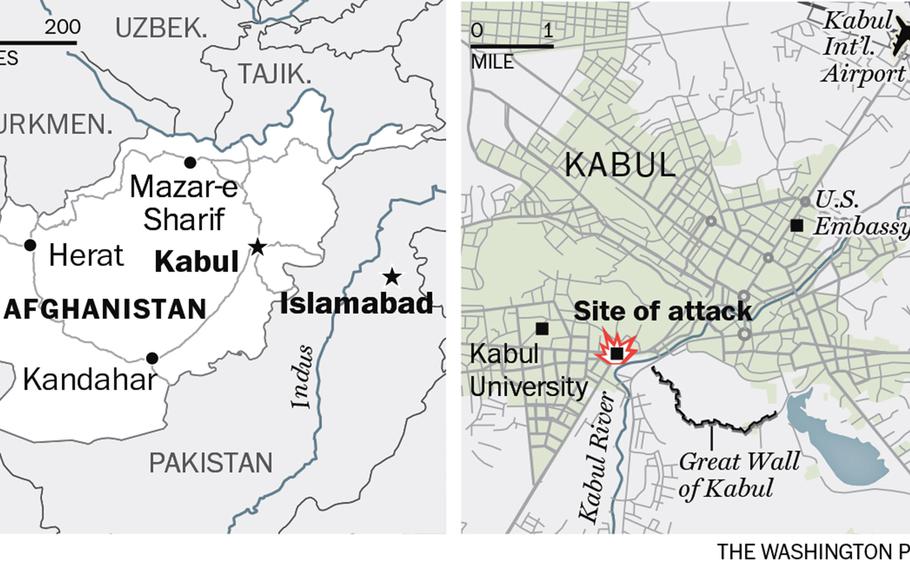 KABUL, Afghanistan — At least 81 people were killed and 286 wounded Saturday in a twin bombing claimed by the Islamic State group that targeted a demonstration by members of the Hazara minority, officials and witnesses said.

The marchers in the Afghan capital were demanding that a major regional electric power line be routed through their impoverished home province. Most Hazaras are Shiite Muslims, while most Afghans are Sunni.

Health Ministry spokesman Mohammad Ismail Kawoosi said that the victims were taken to nearby Isteqlal hospital and that the death toll was likely to rise.

Ziaudin Qayoomi, a witness, told Stars and Stripes that the two explosions occurred about 14:30 p.m. He said that the first occurred near a cinema and that the second went off in Dehmazang Square, where demonstrators wanted to erect tents and spend the night to continue their demonstration for the second day.

"We all were chanting, and suddenly there was a big blast, people ran towards the square and then there was another blast at the square," he said.

Other witnesses said ambulances struggled to reach the scene, as roads had been blocked to prevent the movement of the demonstrators, who were demanding authorities include Bamiyan province in the multimillion-dollar electricity project.

Authorities had not determined whether the attack was the work of suicide bombers or whether improvised explosive devices were used, said a Kabul police officer who spoke on condition of anonymity because he was not authorized to speak with the media.

"We are still investigating this,” the officer said.

Late Saturday night, Afghanistan's Interior Ministry issued a ban on public gatherings of all types for the next 10 days. The ministry, which controls the police, said in a statement that "any kind of public gathering and demonstration is banned," starting immediately.

The ministry's announcement — which may be seeking to address concerns about sectarian violence — cites Afghan police law and the international covenant on civil and political rights.

“The president of Islamic Republic of Afghanistan is deeply saddened by this tragic attack and ordered the government authorities help out the victims as soon as possible,” the presidential palace said in a statement. “It is the right of every Afghan citizen to stage peaceful demonstrations and the government is trying their best to provide security for demonstrations.”

Tadamichi Yamamoto, head of the U.N. Assistance Mission in Afghanistan, said in a statement that the attack was “particularly heinous because it targeted civilians as they exercised their rights to freedom of assembly and freedom of expression.”

The U.S embassy in Kabul issued a statement, saying: “Our thoughts and prayers are with the families and loved ones of the deceased, and we wish all of those who were wounded a full recovery.”

The Associated Press quoted witnesses who said that security personnel shot their weapons into the air to disperse the crowd, presumably to prevent them from falling prey to a possible secondary explosion.

Efforts to get wounded to the hospital were hindered by road blocks that had been set up overnight to prevent the marchers from entering the city center and area of the presidential palace, witnesses told the AP.

Demonstrators sealed some of the area around the square and prevented police and other security forces from entering, the AP reported. Some threw stones at security forces.

A spokesman for Ghani told the AP that the government had received intelligence that an attack on the march could take place and had warned the organizers.

“We had intelligence over recent days and it was shared with the demonstration organizers, we shared our concerns because we knew that terrorists wanted to bring sectarianism to our community,” presidential spokesman Haroon Chakhansuri said.

The Islamic State group has struggled to establish a foothold in Afghanistan, where most of its activity has been confined to eastern mountainous regions bordering Pakistan.

In March, Ghani declared Islamic State militants had been defeated in the east of the county but they have had a resurgence in recent weeks, with fighting displacing hundreds of people and wounding dozens in Nangarhar province.

A little more than a week ago, during a visit to Nangarhar, Ghani launched a new military operation targeting the Islamic State.

The rights group Amnesty International said in a statement that the “horrific attack ... demonstrates the utter disregard that armed groups have for human life.”

“Such attacks are a reminder that the conflict in Afghanistan is not winding down, as some believe, but escalating, with consequences for the human rights situation in the country that should alarm us all,” the statement quoted Champa Patel, Amnesty’s South Asia director, as saying.

Violence had been widely feared at what was the second demonstration by Hazaras over the power line issue. The last one in May attracted tens of thousands of people and shut down the central business district.

The May march was attended by Hazara political leaders, who were notable by their absence on Saturday.

At the height of the march, demonstrators chanted slogans against the president and Chief Executive Abdullah Abdullah, shouting “death to discrimination” and “all Afghans are equal.”

The so-called TUTAP power line is backed by the Asian Development Bank, with involvement of Turkmenistan, Uzbekistan, Tajikistan, Afghanistan and Pakistan. The original plan routed the line through Bamiyan province, in the central highlands, where most of the country’s Hazaras live.

That route was changed in 2013 by the previous Afghan government. Leaders of the marches have said that the rerouting was evidence of bias against the Hazara community, which accounts for up to 15 percent of Afghanistan’s estimated 30 million population. They are considered the poorest of the country’s ethnic groups and often complain of discrimination.

Hazaras, most of whom are Shiite Muslims, were especially persecuted during rule by the Sunni Taliban between 1996 and 2001.

The Taliban’s spokesman Zabihullah Mujahid said that his insurgent group was not responsible for the blast. The Taliban have been waging an insurgency against the Kabul government for 15 years, since their regime was overthrown by the U.S. invasion in 2001. They rarely issue such statements denying involvement in suicide attacks.

Zubair Babakarkhail and The Associated Press contributed to this report.