Bases going to the dogs - and cats 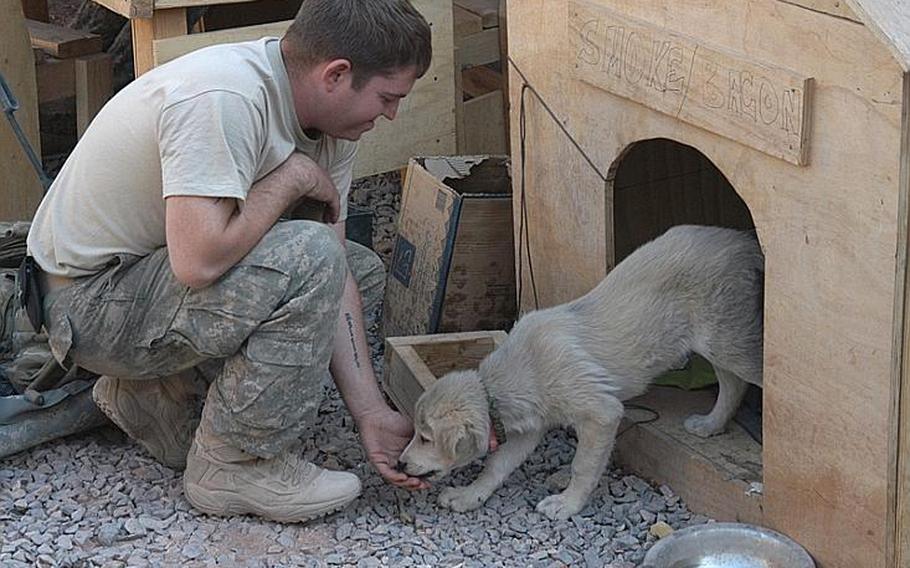 Buy Photo
U.S. Army Spc. Jimmy Labbee uses some food to lure Smoke out of his doghouse at a base in the Arghandab District of southern Afghanistan. Soldiers at the Operational Control Center for the district have adopted four stray dogs. (Jon Rabiroff/Stars and Stripes)

Buy Photo
U.S. Army Spc. Jimmy Labbee uses some food to lure Smoke out of his doghouse at a base in the Arghandab District of southern Afghanistan. Soldiers at the Operational Control Center for the district have adopted four stray dogs. (Jon Rabiroff/Stars and Stripes) 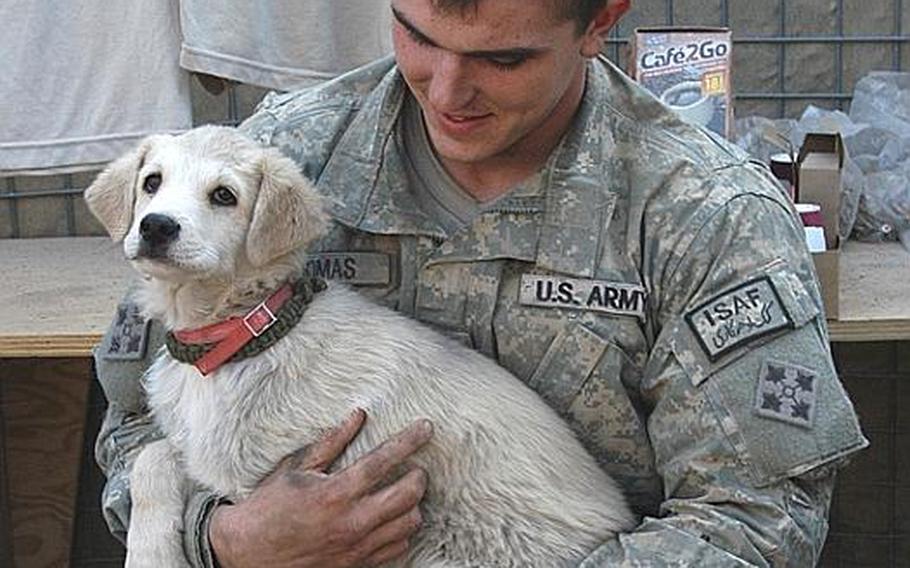 Buy Photo
Pfc. Eddie Thomas holds Smoke, one of four stray dogs soldiers treat as pets at a U.S. Army base in the Arghandab District of southern Afghanistan. (Jon Rabiroff/Stars and Stripes) 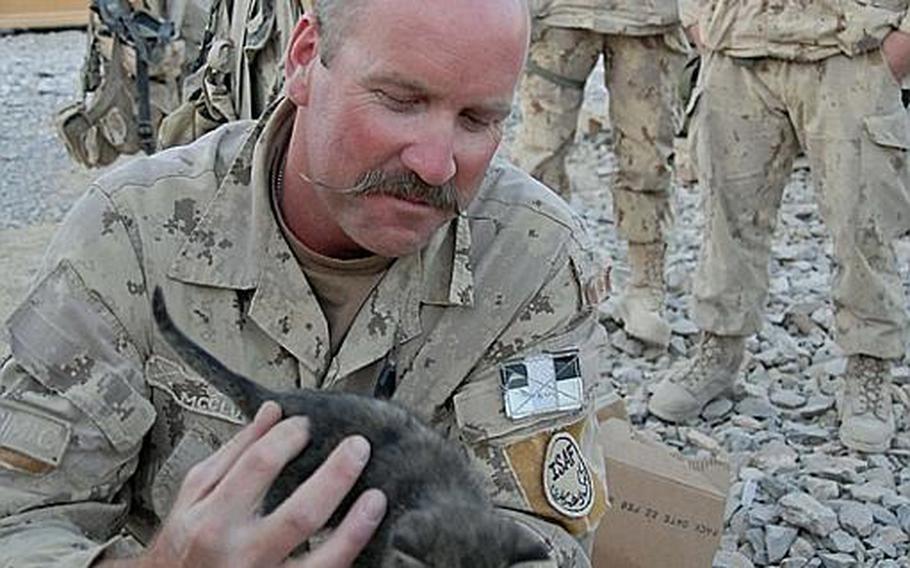 Buy Photo
Canadian Capt. Ken McClure plays with one of six kittens the soldiers at FOB Edgerton had discovered motherless last month and decided to keep. The soldiers named the kittens - McClure is holding Mickey Blue Eyes - and make sure they get plenty of attention. (Megan McCloskey/Stars and Stripes) 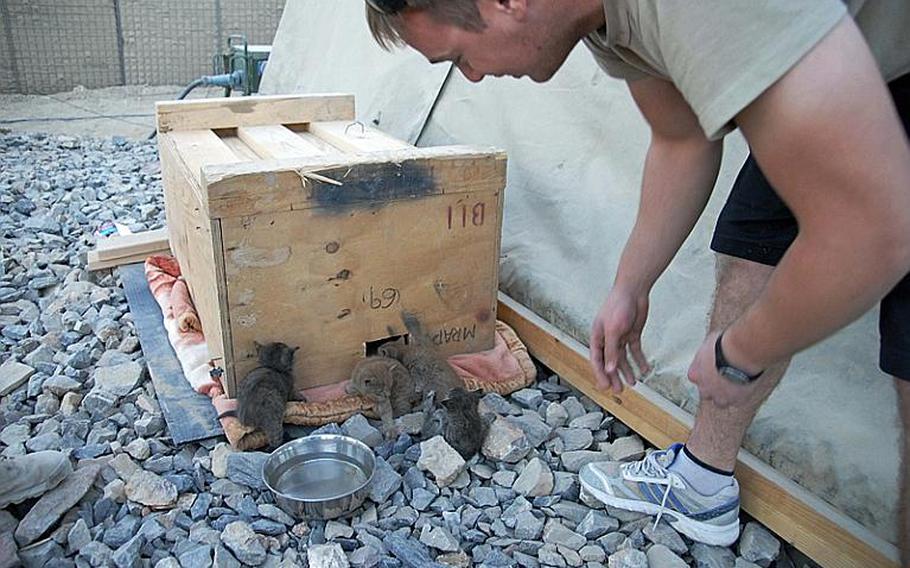 Buy Photo
Canadian Cpl. Josh Sutton tries to encourage a litter of kittens to go inside the house he and a Canadian sailor built for them. The six found kittens, who had been abandoned by their mother, quickly became the most popular residents on FOB Edgerton for some of the soldiers. (Megan McCloskey/Stars and Stripes) 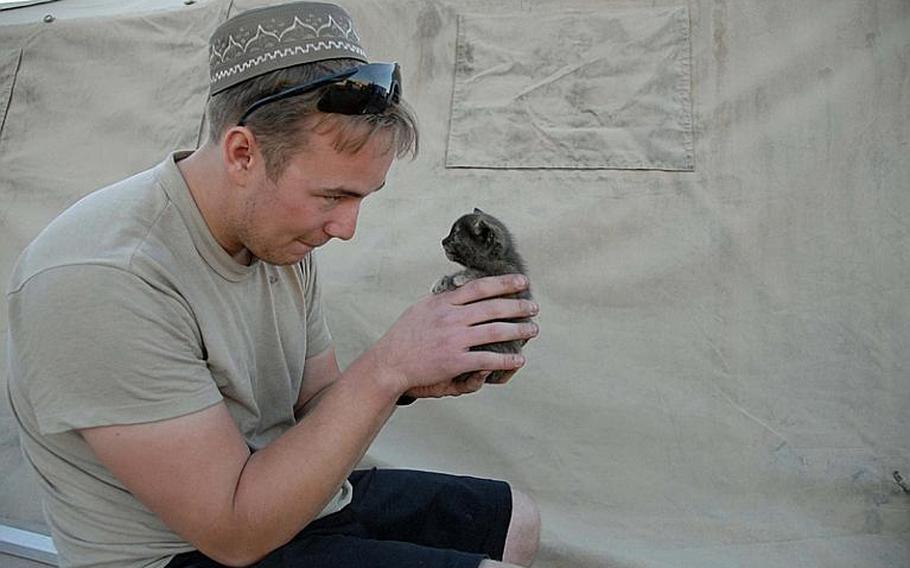 Buy Photo
Canadian Cpl. Josh Sutton bonds with one of five kittens who made a home under his tent at FOB Edgerton in the Dand district of Kandahar Saturday (11/27/10). With only chocolate milk at the FOB, the soldiers fed the kittens tuna and hoped the young animals would be able to digest it. (Megan McCloskey/Stars and Stripes) 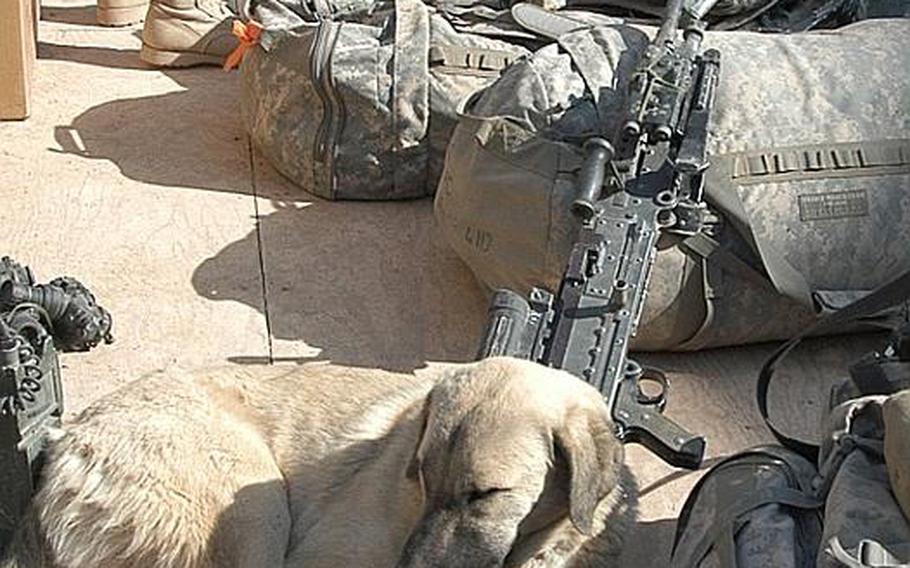 Buy Photo
Dogs Bacon, foreground, and Smoke relax amid military supplies as a unit takes inventory recently at the U.S. Army?s Operational Control Center for the Arghandab District of Kandahar Province in southern Afghanistan. Bacon and Smoke are two of four dogs soldiers on the base have taken as pets. (Jon Rabiroff/Stars and Stripes)

ARGHANDAB DISTRICT, Afghanistan &mdash; U.S. soldiers and Marines are smuggling them onto bases across the country.

The military leadership seems to turn a blind eye, though regulations specifically prohibit them.

They go by names like Smoke, Bacon, Mickey Blue Eyes and Butterscotch, and they can be coerced with as little as a pat on the head, a scratch behind the ears or a tasty treat.

They are the stray dogs and cats of Afghanistan who, at many &mdash; if not most &mdash; U.S. bases here are adopted by soldiers and Marines individually, by squad or platoon, and spoiled as much as any mutts or felines in suburban America.

While no one will say so officially, it appears commanders recognize the value that pet dogs and cats bring to the morale of a base, so they look the other way as long as the animals do not interfere with the mission or present health concerns.

&ldquo;It is common in both Iraq and Afghanistan for units to adopt local dogs and cats,&rdquo; said SPCA International spokeswoman Stephanie Scott. &ldquo;We have been told time and time again that these dogs and cats can be of great comfort and a little piece of home to our troops.&rdquo;

Spc. Jimmy Labbee, of the 1st Battalion, 66th Armor Regiment&rsquo;s Company B, based in the Arghandab district of Kandahar province in southern Afghanistan, said: &ldquo;I can honestly speak for everybody else &mdash; it definitely boosts our morale and gives us another bit of responsibility. It keeps our energy positive, playing with them and spending time with them.&rdquo;

In 2000, U.S. military General Order 1A was issued, &ldquo;To identify conduct that is prejudicial to the maintenance of good order and discipline of all forces in&rdquo; war zones.

More than 20 activities are listed as prohibited, including having sex with a foreign national, drinking alcohol, looking at pornography or removing national treasures. Another prohibited activity &mdash; punishable under the Uniform Code of Military Justice &mdash; is, &ldquo;adopting as pets or mascots, caring for, or feeding any type of domestic or wild animal.&rdquo;

Despite that, you can close your eyes, pick any U.S. military base in Afghanistan and find yourself a heartwarming pet story worthy of an &ldquo;Animal Planet&rdquo; feature.

In a secluded corner of the U.S. Army&rsquo;s Operational Control Center for the Arghandab district, there is a wooden dog house surrounded by a generous supply of tennis balls that is home to Momma, Bacon and Smoke. Smoke and Bacon have their names written over the entry to the shelter.

&ldquo;Smoke, he&rsquo;s our squad dog, but he goes around to all the squads,&rdquo; Labbee said. &ldquo;We all pretty much look after the dogs.&rdquo;

One or more of the dogs goes out on virtually all foot patrols, according to soldiers at the base.

&ldquo;When they see us out here getting ready, they usually sit around and wait for us to go [on patrol],&rdquo; Labbee said. &ldquo;They usually hang out with the front guy.&rdquo;

Body armor be damned, the dogs are protective of their military mates.

&ldquo;They keep a lot of the rambunctious kids away &mdash; the ones who throw rocks and stuff like that,&rdquo; he said. &ldquo;Bacon just mostly tries to play with them, and they run off. But Momma, she&rsquo;ll actually run after them and scare them off.&rdquo;

At an outpost adjacent to the Afghan National Police headquarters in the Garmsir district of Helmand province, the U.S. Marines in recent months launched a catnapping mission during which two felines were taken from nearby Forward Operating Base Delhi for the purpose of taking care of the outpost&rsquo;s mice problem.

Weeks later, the mice were gone but the cats remained as the constant objects of affection and, at one point, a spirited discussion among the Marines about which had the more interesting personality traits and habits.

&ldquo;They&rsquo;re more like dogs than cats,&rdquo; one Marine said, as if bragging about his children.

At FOB Edgerton in Kandahar province, soldiers recently discovered a litter of abandoned kittens and promptly went about spoiling them. Two Canadian servicemembers fashioned a house for the six felines by putting a blanket down and cutting a door into an upside down crate.

As word spread about the kittens, it was not long before a crowd of a dozen Canadian and American soldiers were standing around cooing at the squirming fuzz balls. By the following day, the kittens had all been given names, including Mickey Blue Eyes, Fear Factor and Butterscotch.

The kittens were never left wanting for attention. They ate eggs, tuna and chocolate milk brought to them from the dining facility; one soldier made a point of putting drops in their eyes every day to ward off conjunctivitis; and there always seemed to be at least one soldier sitting with the felines no matter the time of day.

The IED-detecting successes of military working dogs used during the war in Afghanistan have been well-documented. But they are not the only animals in Afghanistan credited with saving the lives of servicemembers.

In February, a suicide bomber reportedly snuck onto a U.S. military base in the Dand Aw Patan district of Paktia province and was headed toward a barracks when three stray dogs attacked him, forcing him to prematurely detonate his explosives, killing himself, one of the dogs and injuring five soldiers.

The surviving dogs, Target and Rufus, were credited with saving dozens of American lives and subsequently appeared on &ldquo;Oprah.&rdquo; They were even adopted by families in the U.S. Unfortunately, Target eventually wandered away from his Arizona home, was picked up and mistakenly euthanized at an animal shelter.

In September, at Combat Outpost Ware in the Arghandab district, stray dogs Thumper and George, who liked to go out on patrol with their two-legged base buddies, were killed when one of them stepped on an IED.

&ldquo;It&rsquo;s good that they kept a human from getting injured, but it was also bad because they were our pets,&rdquo; said Spc. Sean Hutchinson of the 1-66&rsquo;s Company B. &ldquo;But, better them than a human.&rdquo;

U.S. military officials in authority were reluctant to talk about stray dogs and cats taken in as pets by their soldiers and Marines, because it is still against regulations no matter how often it is done.

In fact, when a Stars and Stripes reporter recently started making inquiries about getting photographs of stray dogs accompanying troops on patrol, soldiers at one base made a point of not taking the animals with them outside the wire. They said they were afraid someone high in the chain of command might order the killing of on-base pets if the widespread practice were publicized.

One official who was willing to address the controversy was Lt. Col. Matthew Reid, commander of the 2nd Battalion, 1st Marine Regiment, who essentially said he has a lot more important things to worry about in the life-and-death world of a war zone than who might be sneaking a puppy or kitten into their bunk at night.

&ldquo;I really haven&rsquo;t given it too much thought, to be honest,&rdquo; he said, adding that he was aware of cats employed on some bases to address rodent concerns. &ldquo;My focus is usually elsewhere, and my mind is always going 100 miles a minute.

&ldquo;It&rsquo;s probably not wise to allow troops to keep indigenous animals as pets, for many reasons. Although, with 50 outposts in my [area of operation], there may be a few violators.&rdquo;