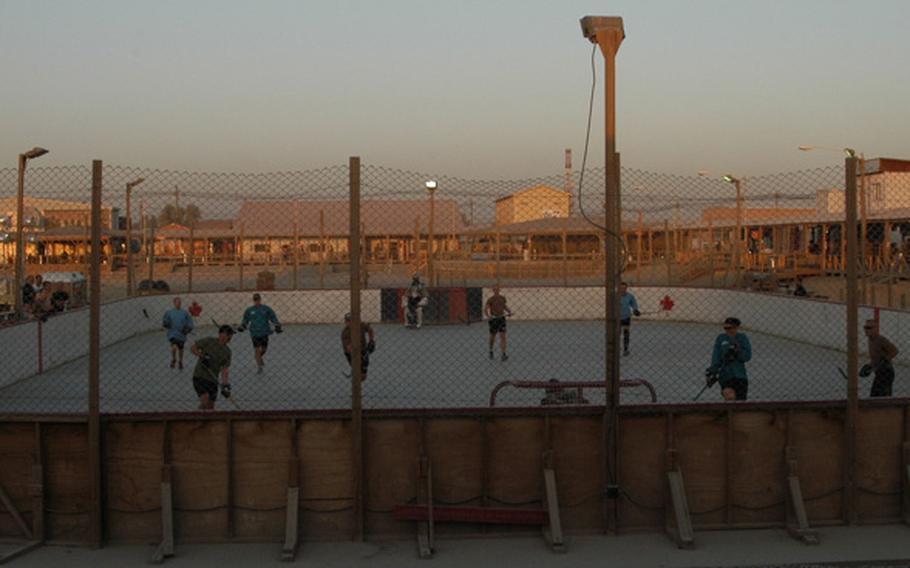 Buy Photo
Players scrimmage in preparation for the upcoming season of the Kandahar Hockey League at Kandahar Airfield in southern Afghanistan. Last season, there were 24 teams in the ball hockey league -- 21 made up of Canadians, two from Slovakia and one from the United States. (Jon Rabiroff/Stars and Stripes)

Buy Photo
Players scrimmage in preparation for the upcoming season of the Kandahar Hockey League at Kandahar Airfield in southern Afghanistan. Last season, there were 24 teams in the ball hockey league -- 21 made up of Canadians, two from Slovakia and one from the United States. (Jon Rabiroff/Stars and Stripes) Buy Photo
American servicemembers scrimmage against each other in preparation for the upcoming ball hockey season at Kandahar Airfield in southern Afghanistan. The rink is one of the unusual sights at the KAF boardwalk, where visitors and residents can shop or dine at about two-dozen shops and restaurants, or play a variety of sports in the common area in the middle of the boardwalk square. (Jon Rabiroff/Stars and Stripes) Buy Photo
Army Capt. Ken Schoonover, the goalie, prepares to block a shot during a scrimmage of American players preparing for the upcoming ball hockey season at Kandahar Air Field in southern Afghanistan. Schoonover served as captain of the lone American team in the 24-team league last season, and wore a mask painted in an American flag design by his mother. (Jon Rabiroff/Stars and Stripes) 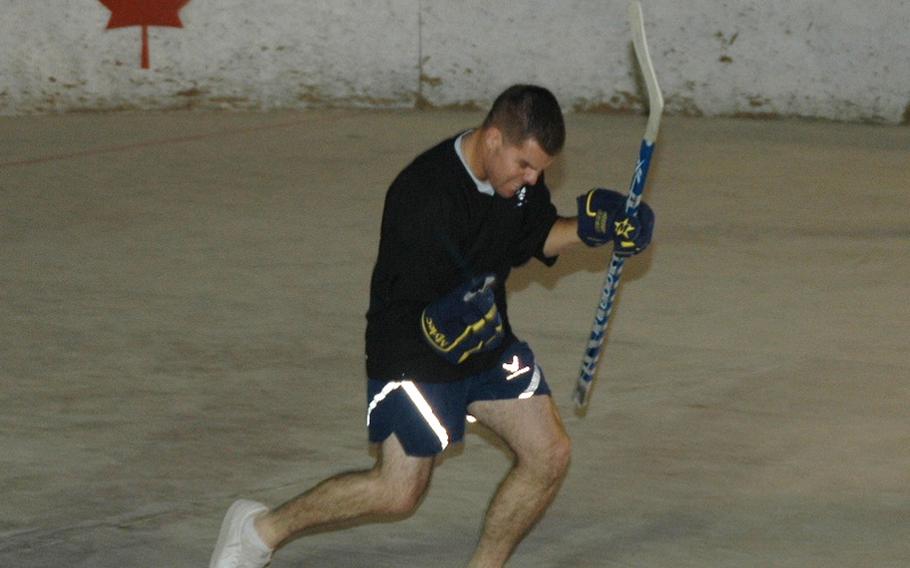 Buy Photo
Airman 1st Class Ryan Dukett celebrates a goal with what he called his 'Tiger Woods fist-pump' during a scrimmage of American players preparing for the upcoming season of the Kandahar Hockey League, a ball hockey organization based at Kandahar Air Field in southern Afghanistan. (Jon Rabiroff/Stars and Stripes) 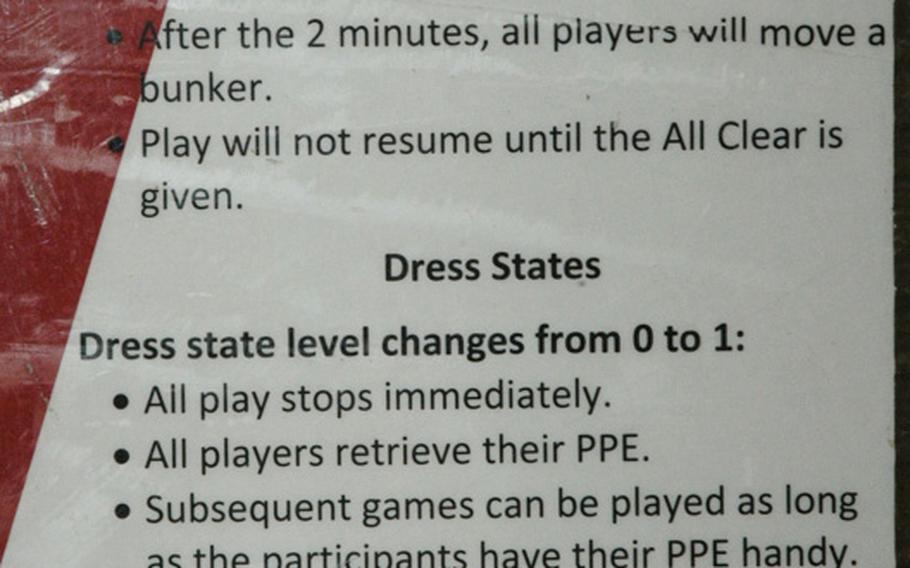 Buy Photo
A sign outlines 'Dress States and Rocket Attack Procedures' next to the ball hockey rink at the boardwalk at Kandahar Air Field in southern Afghanistan. (Jon Rabiroff/Stars and Stripes) Buy Photo
Capt. Ken Schoonover, the goalie and outgoing captain of the U.S. team in the ball hockey league at Kandahar Air Field, makes a kick save during a recent scrimmage of American players in southern Afghanistan. (Jon Rabiroff/Stars and Stripes)

KANDAHAR AIR FIELD, Afghanistan &mdash; A tree grew in Brooklyn, they found water on the moon and every night, as war rages all around, hockey is played in the deserts of southern Afghanistan.

&ldquo;My dad asked me what it&rsquo;s like to hit a puck on the sand,&rdquo; quipped Airman 1st Class Ryan Dukett, 21, of Edwardsville, Ill. &ldquo;I told him, &lsquo;It&rsquo;s kind of rough.&rsquo;&rdquo;

To be clear, the game being played at the massive Kandahar Air Field is not ice hockey, but ball hockey &mdash; where the ice, skates and puck are replaced by a floor, sneakers and a hard plastic ball on a rink about half the size of a National Hockey League surface.

But, in a country filled with strange sights, there may be none more unusual than the hockey rink set up in a corner of the common area of the airfield&rsquo;s boardwalk area.

The rink was completed in late 2006, and was mostly the work of Canadian engineers volunteering their days off or evenings to build it, according to Kandahar Hockey League president Joshua Finnan, a master corporal in the Canadian military working as an electronics technician with Task Force Kandahar.

Army Capt. Ken Schoonover, a goalie and the American team&rsquo;s captain for part of last season, said, &ldquo;Within about a week of getting here, I walked down here and saw this on the boardwalk, and I was like, &lsquo;Holy (cow).&rsquo; &rdquo;

When he reported the news to friends and family back home in North Brunswick, N.J., the rink raised about the same number of eyebrows as the name of one of the two-dozen shops and restaurants at the boardwalk.

&ldquo;They couldn&rsquo;t believe, of course, that we had a (T.G.I.) Friday&rsquo;s, much less having hockey on top of that,&rdquo; the 28-year-old said.

The boardwalk is the center of the universe at Kandahar. In addition to Friday&rsquo;s, there are some 30 shops and coffee bars, barbershops and ATMs, and wi-fi at the tables all along the covered walkway.

The KHL is between seasons, but virtually every night teams play under the lights preparing for the upcoming one, which begins in December. Even at night, the heat can be oppressive. Finnan did not know the highest temperatures games have been played in, but has personally played when it was more than 115 degrees, he said.

The scrimmages look pretty much like the ball hockey games one might find on the streets of any neighborhood in the U.S., aside from the occasional roar of war planes passing overhead, or the &ldquo;Rocket Attack Procedures&rdquo; posted next to the rink.

There are two hockey seasons each year, with teams playing about 24 games over a four-month stretch. Last season, there were 24 teams in the league &mdash; 21 made up of Canadians, two of Slovakians and a lone American entry. The teams are separated by skill level in A, B and C leagues, and the U.S. contingent fared pretty well, finishing third in the 10-team second division.

The Americans were not as lucky when they squared off against a team of all-stars from all the Canadian entries &mdash; a game scheduled to coincide with the 2010 Olympic hockey face-off between the two countries.

&ldquo;It didn&rsquo;t work out so well for us,&rdquo; Schoonover said with a sneer. &ldquo;We&rsquo;ll say it was 16-4,&rdquo; in favor of the Canadians. And back home, Canada beat the United States 3-2 in overtime to win Olympic gold on their home ice in Vancouver.

The rink is more than a curiosity for Canadians back home; NHL analyst and former coach Don Cherry regularly highlights the Canadian military during broadcasts, and has visited several times, as has national hero and former player Guy Lafleur, among many others. The Stanley Cup itself made an appearance in March as former NHL players visited and played with the guys.

The Canadian military foots the bill for the equipment needed to run the league, though a few years ago Ottawa Senators owner Eugene Melnyk brought more than $50,000 worth of equipment, Finnan said.

And many of the players eventually get their own stuff, Schoonover said, &ldquo;because they kind of get tired of playing in another guy&rsquo;s sweaty equipment.&rdquo;

&ldquo;The Canadians have a supply system (through which they) can order this stuff,&rdquo; Schoonover said. &ldquo;That actually is part of the military supply, which I thought was pretty damn interesting.&rdquo;

Players said the last thing they want to do is come home from a war nursing a hockey injury. So, while the play is intense, everyone understands the main reason they are in Afghanistan.

Army Staff Sgt. Michael Maice of the 86th Expeditionary Signal Battalion, said, &ldquo;Obviously, what we&rsquo;re here to do is more important than what we do on the rink. You have to use a certain amount of common sense.

&ldquo;I would not recommend putting your body on the line like you would in a real game back in the States,&rdquo; said the 26-year-old from Orlando, Fla.

Still, the games can get rowdy, according to Dukett, a member of the 451st Expeditionary Aircraft Maintenance Squadron.

&ldquo;I haven&rsquo;t seen a fight yet, but I&rsquo;ve seen a few people topple over someone and bounce off the ground a little bit,&rdquo; he said.

Schoonover added that players sometimes &ldquo;catch a slapshot in an area where they probably wouldn&rsquo;t want to have one, but you probably have a greater chance of injury playing basketball.&rdquo;

While the league allows players to relive the hockey glory of their youth, many also see it as a just a good way to blow off some steam and take their minds off the difficult and dangerous jobs they do here.

&ldquo;My wife and I talk about it, and she&rsquo;s just glad I have something to do besides work,&rdquo; Maice said.

The games sometimes draw quite an audience, the players said.

&ldquo;The Slovakian team has a real good following,&rdquo; Maice said. &ldquo;They&rsquo;ll come out with their little war drums and do little chants. It&rsquo;s a nice hour away from everything else going on here.&rdquo;

And the players are not above a little nationalistic trash-talking.

&ldquo;Everybody is a good sport,&rdquo; Maice said. &ldquo;But there is a little bit of pride to be the only USA team.&rdquo;

One person looking forward to the upcoming season is 32-year-old Army Capt. Renae Binstock of the 863rd Engineer Battalion, who heard about the Kandahar Hockey League before she got here and came prepared.

&ldquo;I brought my gloves, ready to go,&rdquo; said the veteran of a women&rsquo;s ice hockey league near her home in Golden, Colo.

Asked about the level of play here, she said, &ldquo;It&rsquo;s good enough for Afghanistan, right?&rdquo;