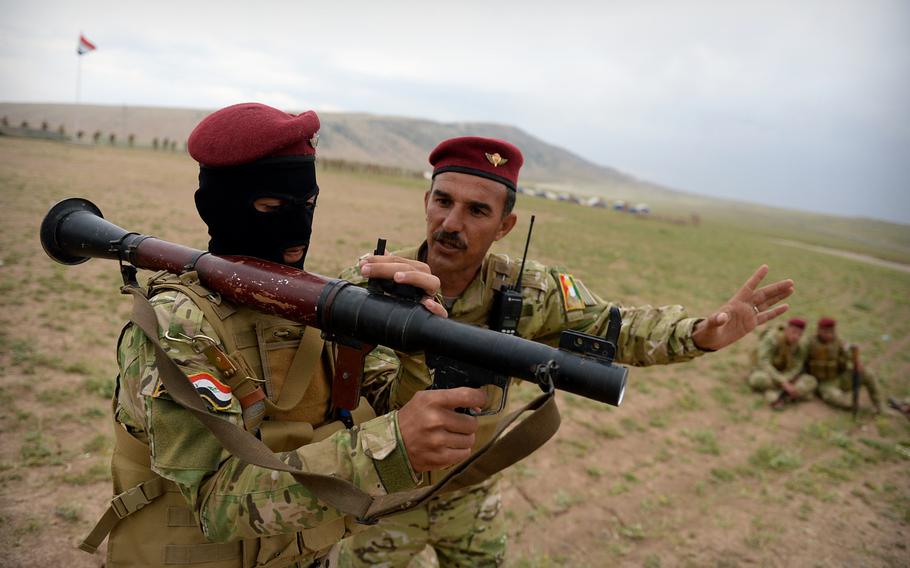 An instructor teaches a volunteer fighter how to operate a rocket-propelled grenade launcher at a camp in northern Iraq run by Turkish advisers and exiled leaders from Mosul. The makeshift camp can train as many as 1,000 fighters at a time. (Josh Smith/Stars and Stripes)

An instructor teaches a volunteer fighter how to operate a rocket-propelled grenade launcher at a camp in northern Iraq run by Turkish advisers and exiled leaders from Mosul. The makeshift camp can train as many as 1,000 fighters at a time. (Josh Smith/Stars and Stripes) 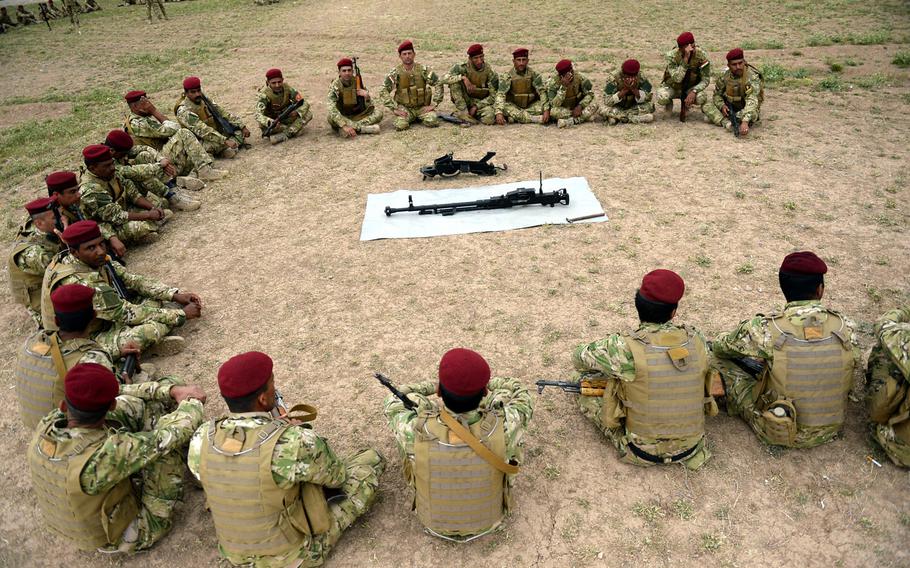 Volunteers in the fight against the Islamic State group listen to an instructor at a training camp in northern Iraq. The camp's commander says more than 5,000 fighters have been trained so far. (Josh Smith/Stars and Stripes) 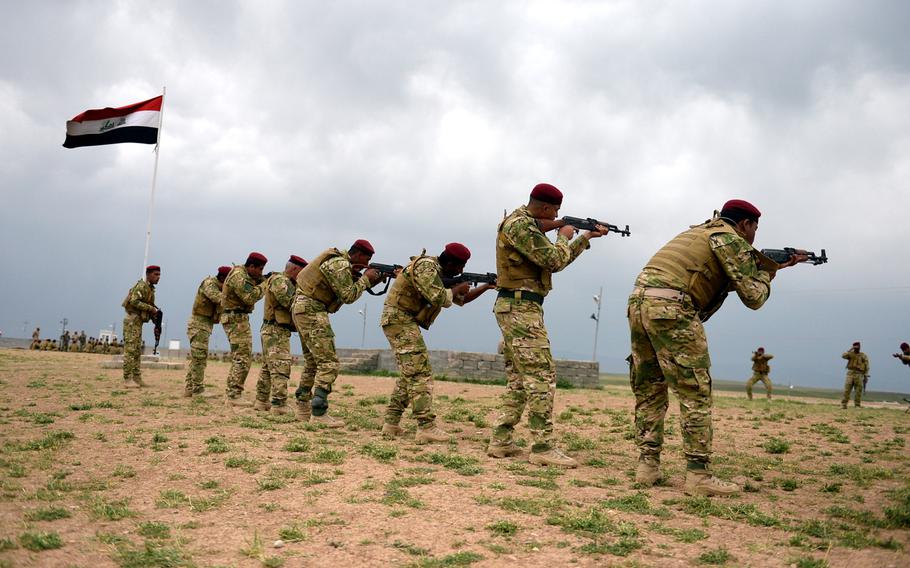 Volunteer in the fight against the Islamic State, mostly from minority groups like Sunni Muslims, Christians, and Yezidis, practice at a training camp in northern Iraq. While thousands of volunteers have been trained at the camp, most have been sent home to wait until weapons can be procured. (Josh Smith/Stars and Stripes) 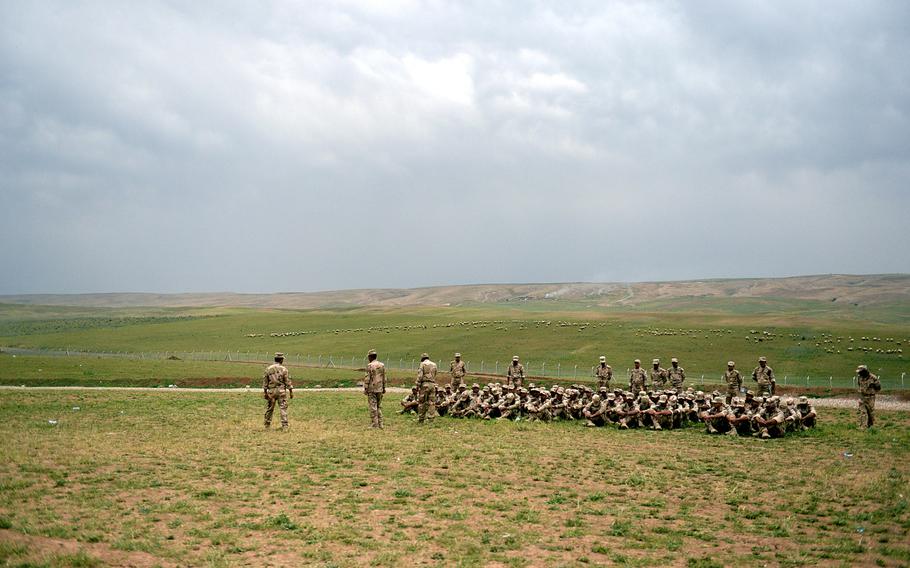 As sheep graze in the background, volunteer fighters listen to an instructor at a camp in northern Iraq. The volunteers, who are training to fight the Islamic State group, have only a few broken weapons to train with. (Josh Smith/Stars and Stripes) 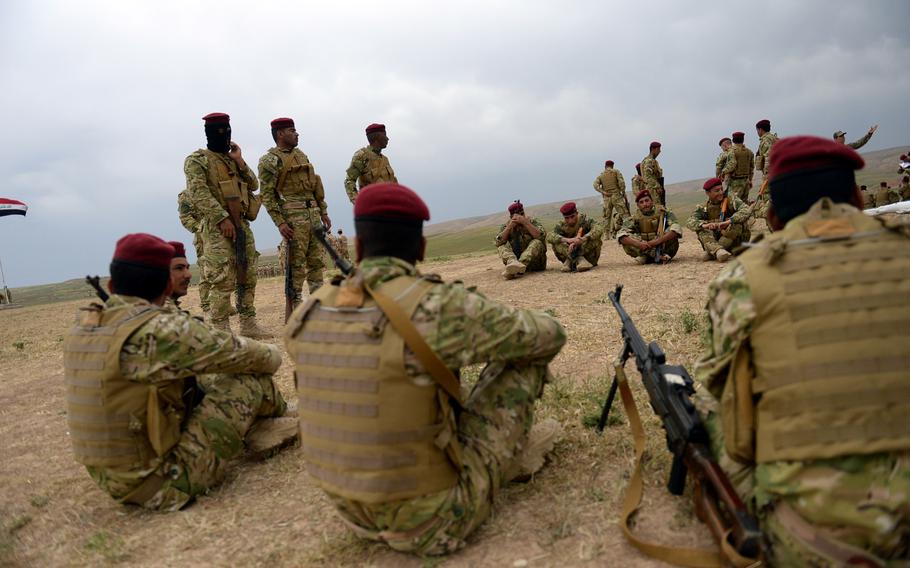 New recruits in the fight against the Islamic State group listen to a lesson at a training camp in northern Iraq. Waves of volunteers arrive every three weeks, but leaders say they don't have enough weapons to arm the new forces. (Josh Smith/Stars and Stripes)

IRBIL, Iraq — At a military base among the rolling hills of Kurdistan, thousands of volunteers have been trained to fight Islamic State militants just 10 miles from the group’s stronghold of Mosul.

As the base expands, it’s preparing to train thousands more. Yet many of the recruits — mainly Sunni Muslims, Christians, Kurds and other minorities — are no closer to the battlefield than when they began drilling. Without enough weapons to fight, they are sent home after an average of three weeks of training.

The fighters, whose role could prove crucial in the effort to rout the Islamic State group, are at the center of a debate over whether the United States and other Western countries should send weapons directly to Iraq’s minority groups instead of channeling them through the Shiite-dominated central government.

The volunteers’ leaders say that Baghdad, which has expressed fear that the Sunni volunteers might turn on the government after an Islamic State defeat, has been funneling most of the arms provided by international backers to its Shiite militia allies. Though some Republicans in Congress favor sending weapons straight to the Sunnis and Kurds so as to bypass Baghdad, the Obama administration firmly opposes such a move out of fear it could deepen the country’s ethnic divide.

“We have about 10,000 fighters who are well-trained to fight, but so far we don’t have enough weapons or equipment for them,” said Atheel al-Nujaifi, a Sunni and the exiled governor of Nineveh province, which includes Mosul. “The central government hasn’t given us weapons for the volunteers, and even for the police, they have only given 20 percent of what they need. It’s a real problem for us.”

The Iraqi Ministry of Defense declined to comment for this article.

With herds of sheep grazing on sweeping hillsides, the peaceful setting at the camps in northern Iraq is far removed from the horrors these recruits are preparing to face. They run through their exercises with a variety of old Russian-designed weapons, many of which are missing parts.

“We have only been given enough weapons to train with,” said the camp’s commander, Gen. Mohammed al-Talib. He, like most of the men he helps train, is a refugee from territory ravaged by the Islamic State, also known as ISIS.

Capable of accommodating 1,000 trainees at a time, the camp has already graduated about 5,000 fighters since late last year. But without enough weapons to fight, most are sent home after training until they can be called up when more weapons are available.

Turkey — a contributor to the U.S.-led coalition against the Islamic State — is financing an effort to make the camp into a more permanent establishment. About two dozen Turkish soldiers lead the training. But the facility is being operated separately from coalition training programs.

The question of how best to arm the volunteers is inseparable from Iraq’s religious and ethnic divisions. The debate has ramifications not only for the fight against the Islamic State but for the country’s future unity.

Since the 2003 invasion, many Iraqis are convinced that the U.S. goal is to carve up the country along sectarian lines. Those suspicions have cast a shadow over current American efforts to reach out to Sunni tribes, which provided fertile recruiting grounds for the Islamic State after years of feeling marginalized by the Shiite-led government.

Working with the Sunnis directly is complicated. Most of the Islamic State’s fighters are Sunni. Saddam Hussein’s Baath party was largely Sunni, and the tribes were among many groups that fought a bloody insurgency against the American occupation.

The camp’s leader, al-Talib, for example, served as a commander in the Iraqi army until 2003, when the American provisional government disbanded the force and barred Baath party officials from most government positions.

Al-Nujaifi blames the militias, officially known as Popular Mobilization Units, for preventing the government from providing weapons to minority groups with the intent of keeping such groups weak.

The U.S. has called upon Baghdad to give Sunni volunteers more weapons and training, contending that Iraq must work with Sunni tribes in the north and the west to try to prevent sectarian divisions. In Anbar province, American advisers are training thousands of Sunni fighters, but Sunni sheiks say they too face a significant shortage of weapons.

Last month, the House Armed Services Committee approved legislation to require that 25 percent of the $715 million in military assistance to Iraq next year go to the Kurds and Sunnis. The measure has been sent to the full House. A bipartisan proposal in the Senate would authorize President Barack Obama to provide weapons and training directly to the Kurds.

Such proposals have drawn outrage from some Shiite leaders, including Muqtada al-Sadr, whose forces fought against the Americans after the 2003 invasion. Al-Sadr has threatened to attack U.S. interests in Iraq and abroad if Congress approves arming the Kurds and Sunnis.

Kurdish security forces face similar difficulties in obtaining weapons. The Kurds have generally been strong allies of the West, but their dream of independence complicates many efforts to provide them support. Officials in Baghdad fear that any arms provided to them could end up being used against the government. NATO member and Iraqi neighbor Turkey, home to its own large and restive Kurdish population, is also suspicious of the Kurds’ intentions.

Michael Rubin, a Pentagon official under former President George W. Bush, also said these groups should not be armed directly.

“The Iraqi government should be the legal recipient for defense deals,” he said. “I can understand the Kurdish desire for direct dealing for arms, but the reality is they have both received arms from Baghdad and from European partners and, rather than use them against the Islamic State, [Kurdish] President Massoud Barzani has stockpiled them for his own party’s use.”

As for Sunnis, Rubin argued that the idea that they will be safe allies for the West is probably delusional.

With Baghdad reluctant to arm Kurdish and Sunni fighters, leaders of this training camp in northern Iraq are looking for other options.

Al-Nujaifi said he had formally asked the international coalition for weapons but was told he could get them only through the central government. “We think we need more pressure on Baghdad or we need to get the weapons separately,” he said. “We are trying to get weapons any way we can, from the black market for example, but it’s a difficult way.”

Related efforts to integrate the volunteers into the Popular Mobilization Units haven’t been much more successful, al-Nujaifi said, with only 1,000 fighters accepted so far into the Shiite-dominated militias.

For 22-year-old recruit Jamal Mansour Talib, volunteering offers a way to reunite his family and reclaim his old life.

“ISIS killed my cousins, took away my livelihood, and scattered my family,” he said. “Part of my family is still in Mosul. This is the only way to be together again.”

At a Christian camp for internally displaced people in Irbil, 17-year-old Aseel Faraj Todia, is waiting for his chance, too. He says American volunteers trained him, then told him to go home — in his case, back to the squalor of a temporary refugee camp.

“They told me they [would] call me when they were ready,” he said. “We want weapons, and we want to fight.”