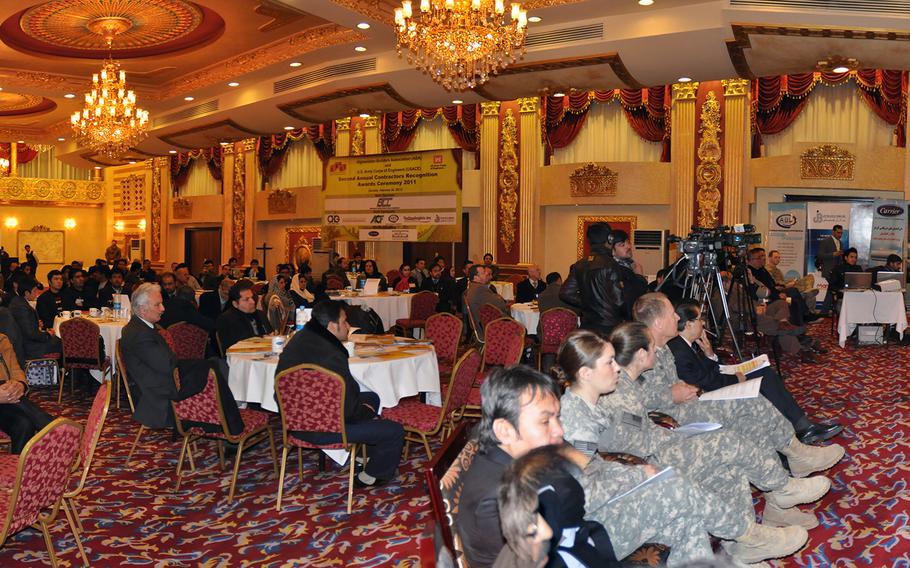 U.S. servicemembers and other guests attend a ceremony at the Intercontinental Hotel in Kabul, Afghanistan, on Feb. 26, 2012. Gunmen stormed the hotel Saturday, Jan. 20, 2018, in a startling attack on the beleaguered city’s west side. (U.S. Army)

KABUL, Afghanistan — At least two gunmen who stormed Kabul’s Intercontinental Hotel on Saturday are dead, officials said in the hours after the attack began on the beleaguered city’s west side. At least one American was trapped in the besieged hotel, which was also on fire.

An unknown number of attackers entered the building and opened fire late Saturday evening. Some witnesses have said there were as many as four attackers who abducted several people inside the building, wounding and killing some others.

At least seven wounded had been taken to area hospitals and many other guests and workers had been evacuated in the first hours of the siege as security forces worked to clear upper floors of the hotel, said Nasrat Rahimi, a deputy spokesman. Officials feared there could be many more casualties still inside the building.

An American who asked to remain anonymous for security reasons had been in contact with a security contractor caught in the crossfire. The contractor, also an American, was on a personal protection detail for a guest and said that at least two floors of the building had been set on fire.

It was unclear whether the attackers had set off suicide bombs to initiate the attack, as is common here, but some security sources have said the gunmen are believed to be armed with suicide vests, grenades and automatic rifles.

The Interior Ministry said security forces had quickly deployed to the scene to cordon off the area and secure the situation. Explosions had reportedly been heard in the area.

Security forces had cleared the ground floor and first level of the hotel and were working their way through the third floor, Rahimi said about three hours into the siege.

Power had been cut off to the area near the hotel in Kabul’s Bagh-e-Bala neighborhood, said a reporter from the local 1TV News channel near the scene.

Cutting power during standoffs with attackers is standard procedure in the Afghan capital, as it was done during the August 2016 attack on the American University of Afghanistan.

In that attack, gunmen had used a suicide car bomb to ram the gates of a neighboring school for the blind and breach a low, weak side wall into the university’s fortified compound.

It’s not clear how the attackers at the Intercontinental had got through layers of security at the luxury hotel that’s popular with locals and foreign visitors. One of two major hotels in the city, it’s often the site of weddings, press conferences, official meetings and other events.

Rahimi said there had been several events at the hotel earlier in the day, but he did not have details on what those were.

A military spokesman at the U.S.-led NATO mission in Kabul said officials were aware of the attack and were following the development of the security situation.

“Afghan National Defense and Security Forces are leading the response efforts,” said Navy Capt. Tom Gresback. “According to initial reports, no Resolute Support or [U.S. Forces-Afghanistan] members were injured in this incident.”

The hotel, situated on top of a hill, is a landmark in the nearly 40 years of conflict in the country.

It hosted Russian officers and a handful of Western journalists during the early days of the 1979 Soviet invasion. It was heavily damaged by rocket attacks during the country’s civil war in the 1990s. It again hosted Western journalists in 2001 during the U.S. invasion seeking to ouster the Taliban and to kill or capture Osama bin Laden and al-Qaida terrorists linked to the 9/11 attacks that targeted New York City and Washington, D.C.

In 2011, nine Taliban militants armed with explosives, guns and grenade launchers cleared several checkpoints and snuck to the rear of the Intercontinental, launching an attack that led to a standoff with security forces lasting five hours and leaving all of the attackers, plus at least 11 others, dead. It was one of the largest and most complex attacks in the city at the time.

Saturday’s attack comes days after the U.S. Embassy in Kabul warned Americans in the Afghan capital to keep a low profile and to remain alert in areas where Westerners tend to congregate.

“We are aware of reports that extremist groups may be planning an attack against hotels in Kabul,” the embassy said in a security message. “These groups may also be targeting public gatherings [or] demonstrations, government facilities, transportation, markets, and places where foreigners are known to congregate.”

The attack follows reports last week that Nikki Haley, U.S. Ambassador to the United Nations, was touting the effectiveness of a more aggressive campaign in Afghanistan under President Trump’s new strategy for the region. Haley, who had traveled to Kabul last weekend with members of the U.N. Security Council, said the government was closer than ever to peace talks with the Taliban.

Last year, Afghanistan saw more U.S. airstrikes than in the previous five, and U.S. military officials have promised to step up pressure against the Taliban on the battlefield this year, hoping to drive them to the negotiating table, a goal that has long eluded the U.S. and Afghan governments.