As Afghans search for loved ones, hope comes over the airwaves 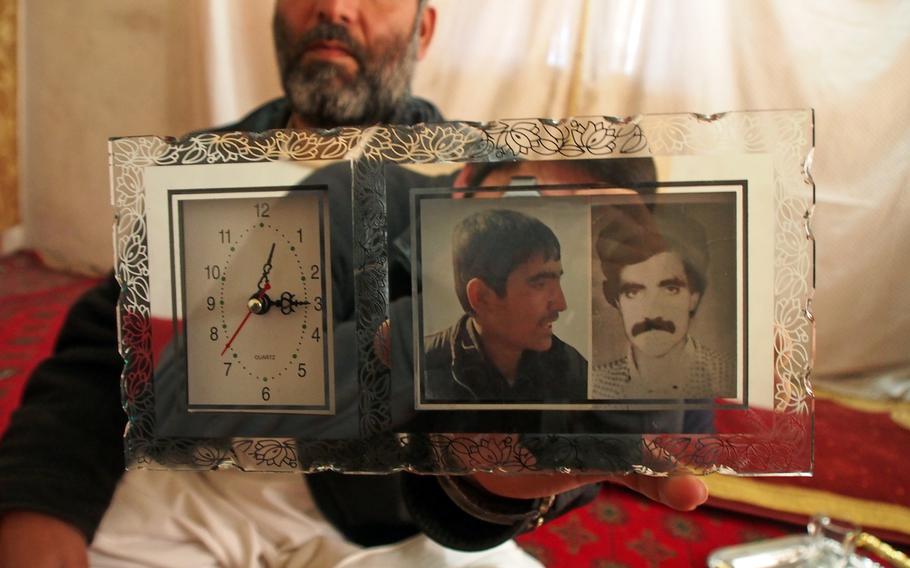 Mohammad Yasin holds a photo of his nephew, Ayoub Khan, who has been missing since August 2012. After Khan disappeared, his family called in to the popular radio show ``In Search of our Missing Loved Ones`` to ask for help in finding him. (Heath Druzin/Stars and Stripes)

KABUL — Four times a week listeners from around Afghanistan tune in to hear expressions of decades of national pain.

The voices of callers to the radio show “In Search of our Missing Loved Ones” convey the cost of persistent war at a family level. Callers are looking for a father, a brother, a daughter. Some disappeared after the Soviets invaded in 1979; some went to religious schools in Pakistan only to be recruited by the Taliban; still others simply vanished after seeking work in a neighboring country. Their family members offer rewards, sob into the phone or simply beg for help in the name of God.

“These are bitter experiences and they listen to learn the lessons from these experiences,” the program’s producer, Zarif Nazar, said of the show’s audience. “There is hardly an Afghan family that is not affected by the plight of war.”

How many people have gone missing after more than 30 years of near-constant war is not known. Afghan government officials said they did not have an estimate.

Fighting has displaced Afghans in numerous ways. Millions fled the Soviet invasion, taking refuge in Pakistan, while many who stayed were killed in the fighting. Millions more, especially Afghans from areas in the south, which saw steady violence after the U.S.-led invasion in 2001, have migrated to Kabul and other urban centers; some of the more fortunate ones have found asylum in Europe, Canada and the U.S.

With the jobless rate in Afghanistan around 35 percent, and much higher in some rural areas, a steady stream of Afghans traveled to Iran and Pakistan for work, many losing touch with their families along the way. Kidnapping for ransom is also rife, and even when families pay, they often get back a body.

The radio show, produced by Radio Free Europe, is broadcast around the country and receives calls from members of all of Afghanistan’s ethnic groups. Nazar says the universal pain experienced by listeners can also build national solidarity in a country still dealing with ethnic tension.

The Fighting in Afghanistan and along the border areas in neighboring Pakistan complicates the search for the missing, limiting where investigators can go to follow leads, said Gen. Mohammad Zahir, the chief of criminal investigations for the Kabul police.

He said it can actually be easier to find people who fall prey to human traffickers and end up in Europe, because of cooperation between the Afghan security forces and INTERPOL, the intragovernmental organization that facilitates exchanges of information between national police forces.

“Those who disappear to insecure provinces or neighboring countries, we find it difficult to find them,” he said.

Mohammad Yasin has been to the police, prisons and the morgue since his nephew disappeared in August last year from his family’s Kabul home. He’s checked with border guards on the Pakistani and Iranian frontiers and grilled his nephew’s friends.

Still, there has been no sign of 16-year-old Ayoub Khan since the day he did not show up for the nightly breaking of the Ramadan fast. Though he struggled with school, Khan had never run away and had no problems at home, Yasin said in an interview with Stars and Stripes.

Yasin now fears the worst for his nephew.

“Maybe someone abducted him or killed him,” he said.

Khan’s father has called into “In Search for our Missing Loved Ones” several times, but no one has responded.

His parents “are getting to be crazy,” Yasin said. “We’ve had to take his mother to the hospital a few times.”

Mohammed Sadiq thought he was doing the right thing for his 13-year-old son, Akhtar Gul, when he sent him for studies at a religious school in Haripur, Pakistan, four years ago. Shortly after, Akhtar and his father had a falling out and the boy fled the school. Sadiq hasn’t seen his son since.

After not hearing from him for a few weeks, Sadiq sent urgent messages to relatives in Pakistan, but their searches were fruitless. Finally, Sadiq made the arduous journey to Pakistan from his village in Baghlan province, going from mosque to mosque in Haripur, asking imams to mention his boy to the faithful over the minaret loudspeakers.

Sadiq returned without even a clue to his son’s whereabouts. He worries Akhtar was taken in by militants or possibly thrown into jail by the Pakistani intelligence service.

Finally he called into “In Search our Missing Loved Ones,” but he has received no responses.

The family sank into depression, Sadiq’s wife became ill with grief and the search for Akhtar took his parents away from work, forcing them deeper into poverty, Sadiq said.

“After I found out he was missing, all I did was search for him,” Sadiq said. “I can’t do anything else.”

But the show’s many tragic stories are interspersed with emotional reunions, like that of Abdul Hakim.

He figured he would tell his family, living in Afghanistan’s Parwan province, about his move after he arrived at his new job, but his new employers didn’t allow their laborers to contact their loved ones.

For another three years, Hakim worked the job without contact with his wife and children until he got word through a friend that his family had left a panicked message with “In Search for our Missing Loved Ones,” asking if anyone knew where he was.

After that, he made the arduous overland journey back to Parwan. He had been gone so long his son, now 12, didn’t recognize him.

When he was reunited with his family, “I felt I got my life back,” he said. “It felt like a dream.”