American wounded after being lured into an ambush in Afghanistan 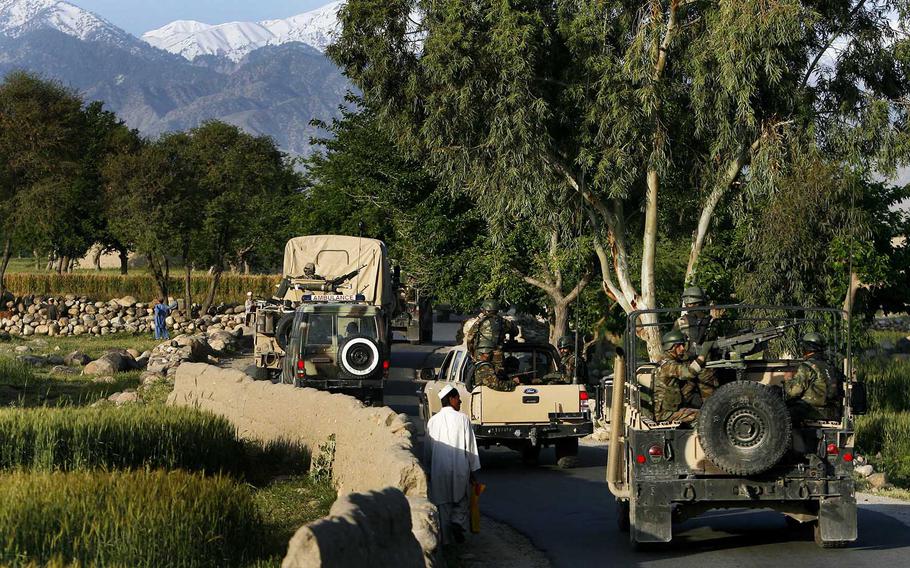 Afghan National Army commandos, assisted by members of Combined Joint Special Operations Task Force Afghanistan, conduct a security patrol through the Achin district of Afghanistan’s Nangarhar province, April 30, 2009. An American servicemember and his Afghan interpreter were wounded Thursday, Jan. 12, 2018, after being lured into a meeting in Achin district with an insurgent group posing as a local militia. (Russell Lee Klika/U.S. Army)

KABUL, Afghanistan — An American servicemember and his Afghan interpreter were wounded Thursday in eastern Afghanistan after being lured into a meeting with an insurgent group posing as local militia, a U.S. military official said.

The Taliban on Thursday had claimed the attack in Nangarhar province’s Achin district was carried out by two insurgent disguised as local militiamen. Initially, U.S. officials only said an American was wounded and would not confirm whether local militia was involved. However, new details were released Friday revealing the attack was part of an ambush.

The insurgent group had baited an Afghan militia leader, the U.S. servicemember and the Afghan interpreter “under the pretense of a security shura meeting” in the district’s Mamand Valley, where U.S. and Afghan forces have been beating back a local Islamic State affiliate, said Navy Capt. Tom Gresback, a military spokesman in Kabul.

“Upon completion of the meeting, multiple members of the insurgent group opened fire with small arms weapons,” he said in a statement. “The Afghan militia leader was killed.”

Some early reports had said two Americans were killed in the attack, but U.S. officials have denied there were any coalition fatalities.

The local militia had been set up to “provide a level of confidence to the Afghan people” in the area, where locals had been forced from their homes with the ISIS group’s rise in 2015, Gresback said Friday.

The New York Times reported the militia had been founded by a member of the Afghan parliament, Zaher Qadir. The regional strongman’s militia decapitated four ISIS members two years ago and circulated images on social media showing the heads on roadside rock piles.

Nangarhar province has been the site of heavy fighting in recent months and was the deadliest area for deployed U.S. forces last year. The first American killed in action this year was slain in a firefight in Achin district, the eighth combat fatality there in nine months.

Afghan forces, often accompanied by U.S. special operations troops, have been laboring to wipe out the ISIS affiliate, known as ISIS-Khorasan, which has taken root in the mostly Pashtun province east of Kabul. The fight, largely in the austere mountain terrain along the border with Pakistan, has proven difficult as ISIS-K has been recruiting heavily from displaced members of the Pakistani Taliban, known as TTP. The Afghan Taliban, which has fought ISIS-K, but has also reportedly fought alongside the group, also operates in the region.

Gresback said successful operations in 2016 had significantly reduced the number of ISIS-K fighters in the area, allowing for an “influx of Afghan National Defense and Security Forces” that has further pushed the terrorist group away from the district’s population centers. Since late December, the fighting has pushed more than four miles into Mamand Valley, a combat base for the ISIS group.

Officials estimate 1,100 ISIS-K fighters continue to operate in the country, including 300 who have spread out to other provinces outside of Nangarhar. The group has claimed responsibility for several high-profile attacks in the country in recent months.

Last week, Attaullah Khogyani, spokesman for Nangarhar’s governor, said joint U.S. and Afghan operations had cleared 80 percent of Achin district of ISIS fighters and hundreds of families had been returning to their villages after being displaced by “the atrocities of [ISIS].”

On Friday, Khogyani said an investigation had been launched to determine the casualties from the ambush and the U.S. airstrike. He said he expected details on the death count Saturday.