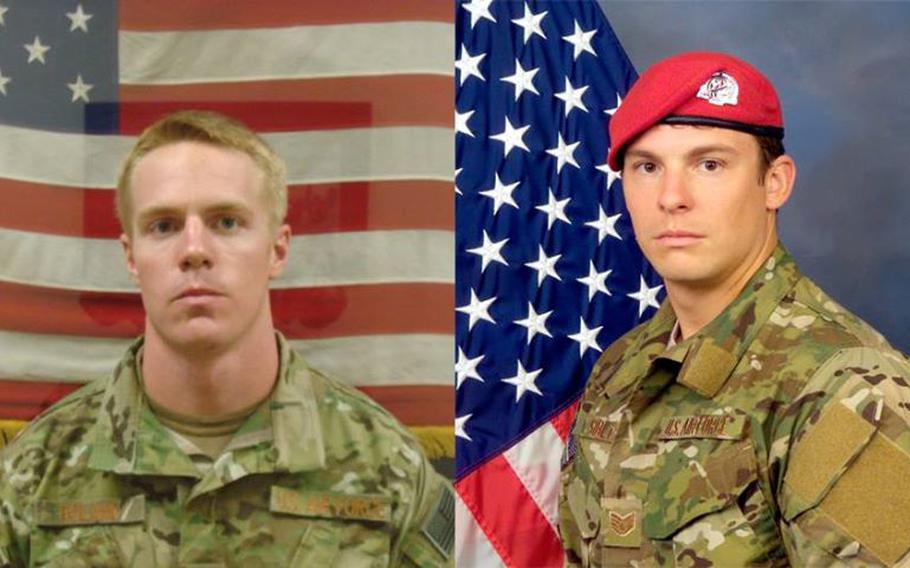 Capt. Matthew D. Roland, 27, and Staff Sgt. Forrest B. Sibley, 31, were shot and killed Wednesday by a lone gunman dressed in an Afghan uniform. He opened fire on their vehicle near Camp Antonik, in Helmand province, the Pentagon said in a news release.

Military officials initially reported that two gunmen carried out the attack and that both had been killed in the ensuing firefight.

But on Thursday, coalition officials said the shooter and another individual dressed as a member of the Afghan security forces were wounded after coalition troops returned fire.

It was unclear, coalition officials said, whether the killings were the result of a so-called insider attack or possibly an accidental shooting by Afghan forces.

Both squadrons are part of the Air Force Special Operations Command.

Gen. John Campbell, commander of all U.S. and NATO forces in Afghanistan, and his counterparts within the Afghan security forces are leading a joint inquiry into the shootings, Col. Brian Tribus, spokesman for NATO’s Resolute Support train-and-advise mission, said Thursday.

Army leaders are conducting a separate investigation into the attack, Tribus said.

If the investigations determine the shootings were the result of an insider attack, it will have been the third such attack against American and NATO troops since the end of the coalition’s combat mission last year.

In April, Army Spc. John Dawson was killed and eight other soldiers were wounded when an Afghan soldier opened fire on American troops in eastern Afghanistan’s Nangarhar province. Dawson was the first U.S. military fatality since the end of NATO’s combat mission.

In January, three American contractors were shot and killed by an Afghan soldier at the coalition’s compound at Kabul airport.