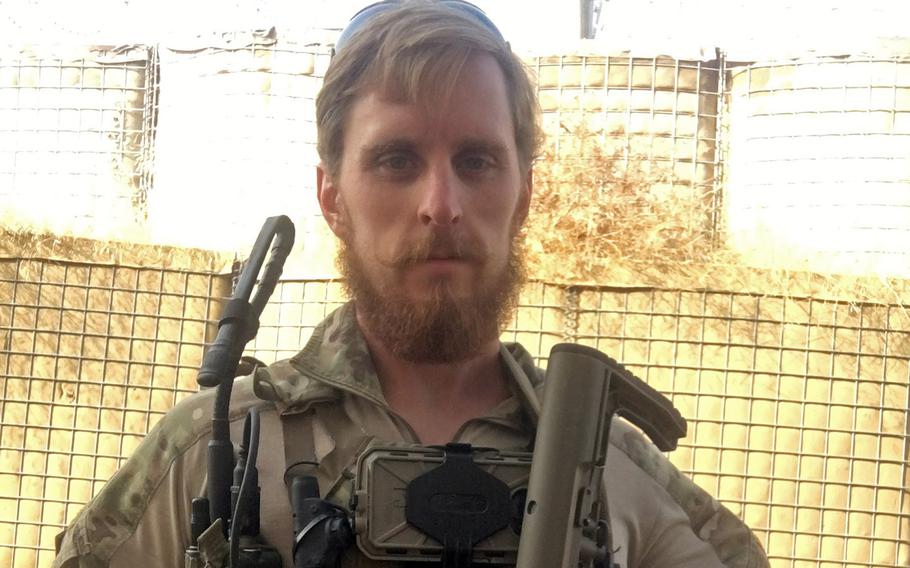 A series of blasts in a cache of seized Taliban rocket-propelled grenades threw three Green Berets several feet, and then the gear they were wearing began to burn setting off ammunition in rifle magazines.

Special Forces soldiers were sifting through a munitions cache seized in a school Taliban militants had used as a base, when suddenly a blast ripped through the stockpile and hurled the soldiers several feet.

The flames then ignited some of the Green Berets’ gear and set off ammunition in their rifle magazines.

“The first thing that comes to mind is fire,” said Staff Sgt. Michael Rogers, a pararescueman who treated seven people wounded in the 2019 blast, later found to be the result of a partner force member’s negligent weapon discharge. “There were so many things covered in fuel and burning. It looked apocalyptic.”

Rogers, now with the 57th Rescue Squadron at Aviano Air Base in Italy, is scheduled to receive the 2021 Air Force Sergeants Association William H. Pitsenbarger Heroism Award in July for his treatment of the wounded. The award is named for a pararesueman who earned the Medal of Honor for aiding soldiers during a Vietnam firefight in 1966.

Rogers’ experience as a mountain guide and paramedic in Wyoming suited him well when he joined the Air Force in October 2014, weeks after his honeymoon. He completed the pararescue program in 18 months, though it normally takes three years, and deployed to Afghanistan in 2017, the Air Force said in a statement last week.

On his second deployment in 2019, he was working alongside a Special Forces unit that was supporting Afghan forces in an area under a concentrated Taliban attack.

“We were just trying to focus on a few districts that were holes for drugs and equipment, and prevent that from continuing to worsen,” he said in the statement, which did not name the area, though it appears to have been northern Kunduz province.

His team typically spent 16 hours on foot or in vehicles and conducted their raids at night, he said.

“Right toward the end of our time there, we had a village that previously received a really bad ambush,” Rogers said. “We counted over 20 rocket-propelled grenades that were fired at our convoy, and two RPGs went right across the hood of our vehicle as we were trying to return fire.”

Locals told them a school nearby was a Taliban headquarters, and there the U.S. and Afghan forces found “piles and piles of radio equipment and different kinds of electronics, Taliban propaganda and about 50 to 60 pounds of homemade explosives,” along with ammunition, mortars and “stacks of rocket boosters,” Rogers said.

A few team members sorted through it all after asking Rogers and others to leave, likely saving their lives.

“All of a sudden we saw a flash and heard two bangs,” he said. “We then felt the concussive force from the explosion and immediately thought we were under attack, so we prepared to fire back.”

“The engineer was blown over and down into a ditch and appeared to be unconscious,” he said. “The communications sergeant was set on fire with RPG fuel after it exploded near him.”

Rogers found the team’s intelligence sergeant on the other side of the stockpile, where he’d been blown two meters from the initial blast and was in “bad shape,” said the Air Force statement, which identified the Green Berets only by their specialties.

A tactical air control party member arrived and helped apply tourniquets to three of the intelligence sergeant’s bleeding limbs. Explosions continued in the stockpile, so the group used their bodies to shield their patient.

Rogers coordinated an evacuation and treated six other teammates. It took more than an hour for the medevac to arrive and take them to a German surgical center.

Later that night, the Special Forces soldier died. Rogers stayed by his side through the night as his team came to pay their respects.

The Air Force statement did not name the Green Beret who died and officials at Aviano Air Base, where Rogers serves, could not provide further information. But the description of events fits details the military has released about the death of Sgt. 1st Class Michael Goble, 33, in Kunduz province on Dec. 23, 2019.

Goble, of Bergen County, N.J., was a member of 1st Battalion, 7th Special Forces Group (Airborne), based at Eglin Air Force Base, Fla. He was on his final deployment and slated to return home in a month. He was survived by his daughter, Zoey, and partner, Jennifer Albuquerque.

“The intelligence sergeant was an ultimate professional,” Rogers said. “He’s definitely the best intel operator I’ve ever known. He was key to ours and the Afghan’s success that winter. Being able to hold that region … a large portion of it was due to his efforts.”

Goble was one of the last U.S. fatalities in Afghanistan before Washington reached an agreement with the Taliban in February 2020 leading to the ongoing withdrawal of U.S. and allied forces.

The incident gave Rogers a greater sense of the sacrifices his colleagues have made, he said.

“Everybody that was there was passionate about their job and doing it right,” he said. “This loss wrecked our team. Losing families, losing a brother. Those men I was with are our absolute heroes, and I would fight alongside them any day, anywhere.”