Construction supply store owner Shafiq warms up in front of his shop with his family Jan. 21, 2015. His business has been on Jalalabad Road for eight years, and he says that 2014 was the most violent he's seen. (Jad Sleiman/Stars and Stripes)

Construction supply store owner Shafiq warms up in front of his shop with his family Jan. 21, 2015. His business has been on Jalalabad Road for eight years, and he says that 2014 was the most violent he's seen. (Jad Sleiman/Stars and Stripes) Sameem's grocery is only feet away from Jalalabad Road. His brother was injured when a suicide car bomber struck a British convoy as it passed by his store in November. (Jad Sleiman/Stars and Stripes) 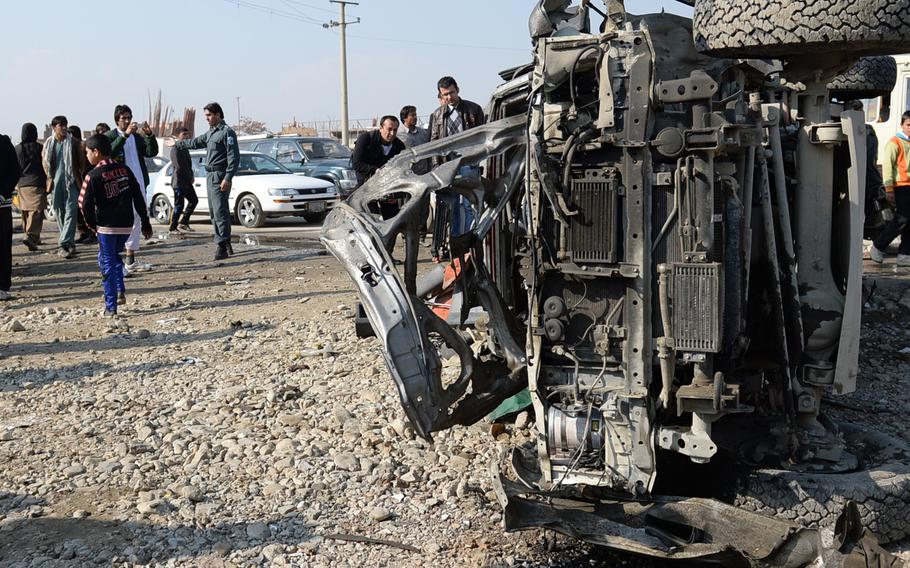 An Afghan policeman moves bystanders away from the battered hull of a British Embassy vehicle, hit by a suicide bomber in the Qalai-Wazir neighborhood of eastern Kabul on Thursday, Nov. 27, 2014. (Carlo Munoz/Stars and Stripes) 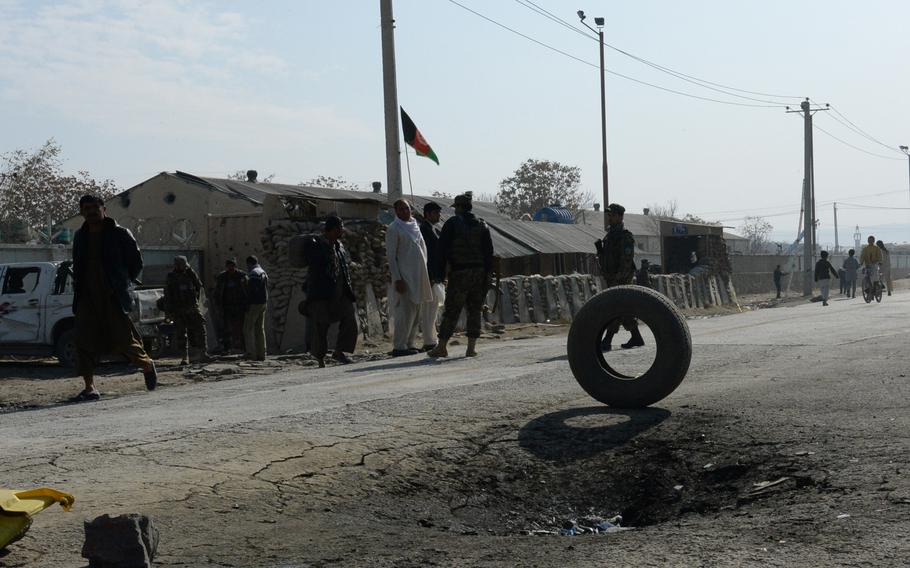 Troops from the Afghan Interior Ministry oversee the cleanup after a suicide bombing outside the Green Village compound in eastern Kabul, Thursday, Nov. 20, 2014. (Carlo Munoz/Stars and Stripes) Jalalabad Road connects the cities of Kabul and Jalalabad in Afghanistan. The 20-mile stretch within Kabul, which houses foreign and local military and contractor facilities, is a prime target for Taliban attacks. (Jad Sleiman/Stars and Stripes)

“There was a huge blast, so powerful we thought it was next door,” he said. “We ran out and some people said it was on the road. My brother was injured.”

Sameem’s grocery is one of dozens of ramshackle shops that stand beside foreign-run fortresses on Kabul’s Jalalabad Road — the most dangerous street in one of the world’s most dangerous cities.

For years, the 20-mile stretch of road from Afghan National Police District 9 to the Afghan Army’s Camp Phoenix has been the frequent target of Taliban attacks, presumably because of the heavy convoy traffic to and from the major installations that line the highway.

Mohammed Salim Almas, head of the ANP’s 9th district, says the Jalalabad Road has seen more attacks than any other part of the city, although he had no precise figures.

More often than not, when the dust and smoke clear it’s the Afghans who work in plywood shops and drive civilian Toyota Corollas that lay dead or injured rather than the Taliban’s true targets who generally work behind heavy blast walls and ride around in armored vehicles.

In the past three months, there have been at least six attacks along the highway, claiming more than 10 lives, including one British national, and injuring dozens more Afghan civilians.

“We are the real witnesses and victims of these explosion because we are so near,” said construction supply store owner Shafiq, who like many Afghans goes by only one name. “A few weeks ago I was sitting in my shop like today and suddenly there was a huge blast and smoke. There were bicycle riders and shopkeepers dead.”

He was referring to the Jan. 5 suicide car bombing against a European police training mission convoy, the first attack against foreigners in Kabul claimed by the Taliban this year. Officials reported one Afghan civilian killed and five injured while the occupants of the target vehicle escaped unharmed.

At a time when coalition fatalities are at 10-year lows — NATO deaths fell for the fifth straight year in 2014 — the United Nations counted 3,188 Afghan civilians killed and 6,429 injured nationwide last year, a record high.

And people like Safiq, who has owned his business on Jalalabad Road for eight years, suspect the count is much higher.

Life is slightly less dangerous for the foreigners on the road. Most of their compounds are protected by concrete barriers topped with concertina wire.

A few weeks ago, Taliban militants attempted to storm the nearby Green Village complex following four suicide bomb attacks. Afghan forces killed the attackers after an hour-long firefight. A Napalese guard was wounded, but no other foreigners were killed or injured.

International security forces in Kabul are mindful of the risks to the Afghans created by their proximity to the local shops.

“Whilst we cannot comment on the details surrounding our movements for obvious reasons, our security staff constantly assess the threats and risks involved to mitigate as far as is possible such threats, not only to our staff, but to the general population,” Christiane Buck, spokesman for the European Union police mission in Afghanistan said in an email. “We do, however, need to move around Kabul in order to deliver on our mandate, supporting institutional reform of the Afghan National Police and the wider justice sector”.

Almas said the concentration of foreigners and Afghan military make the street a prime target for the Taliban. The enormous volume of travelers from four eastern provinces of Nangarhar, Kunar, Laghman and Nuristan also complicates defense efforts.

Thanks to stepped-up patrols and an increased number of checkpoints, however, “we were able to reduce such attacks in the last couple of weeks” he said.

It’s unclear whether the reduction is mostly due to effective Afghan security forces or winter weather. Fighting in Afghanistan is typically seasonal, slowing to a crawl as snow clogs mountain passes and dirt roads and picking up again in the spring and summer months.

It’s those warmer months that have the Jalalabad Road shop keepers like Shafiq and Sameem worried. For them, the need to make a living outweighs the risk of death.

“My house is nearby, I can’t afford rent in another part of the city so I can’t move,” Shafiq said. “I support 10 family members.”

“My family was telling me it’s really dangerous and risky, but we have to be here because there is no better job and my house is near,” he said. “We have to eat. If I was not forced to be here why would I be here?”

Sameem, a much younger man, said he takes care of 14 family members, including his unemployed father.

Although business has slowed considerably as fewer customers risk venturing out into their street, he keeps operating his shop because he has little choice.

“When we leave the house very morning we don’t believe fully we’ll come back.”