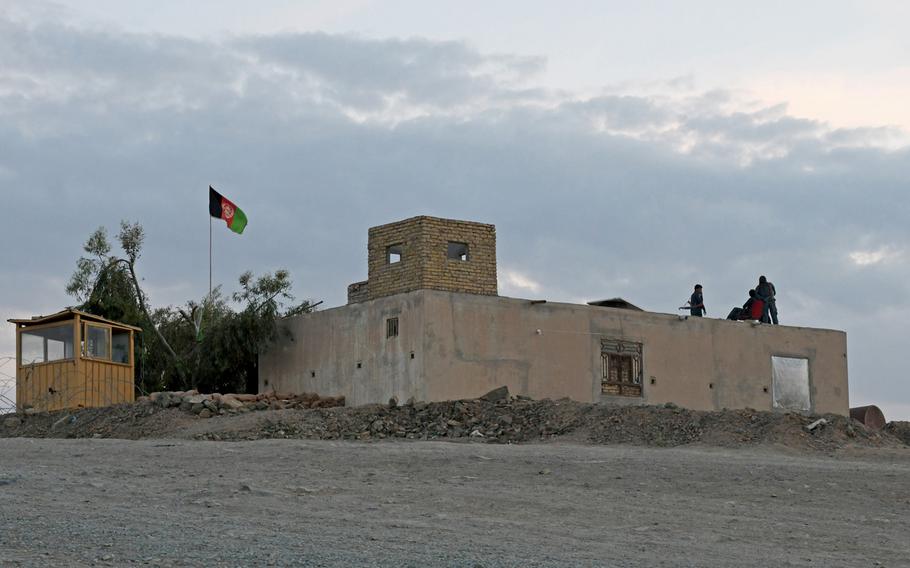 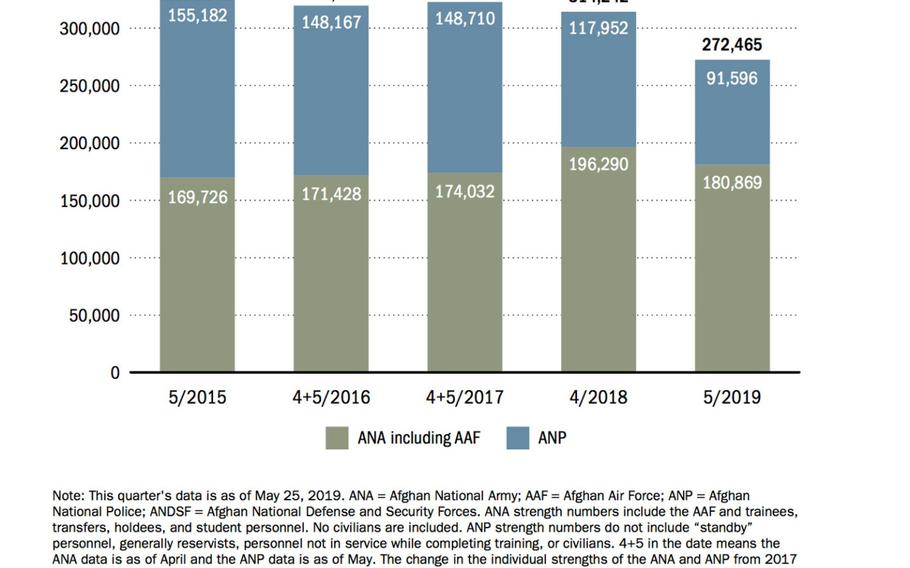 This graph shows a drop in total staffing of Afghan security forces, including soldiers, airmen and police. ()

The sharp drop in personnel numbers may be linked to a new way of tallying staffing data, under which only those who have been biometrically validated in a new pay system are included, the report by the Special Inspector General for Afghanistan Reconstruction said.

The new Afghan Personnel and Pay System showed that the country’s army and air force had 9,554 fewer personnel and the Afghan police nearly 25,000 fewer than reported to SIGAR last quarter.

APPS was designed to prevent officials from pocketing the salaries of nonexistent soldiers and police, the report said.

An ongoing SIGAR investigation into the payment of so-called “ghost” police found that in some cases, former police officers were still being paid, “even if they have resigned, been terminated, or killed,” according to the report.

The Pentagon expects the new pay system to help protect U.S. funds, the report said. The U.S. pays for Afghan security forces personnel, with the exception of the base salaries of police, which are covered by a United Nations-managed, multilateral fund.

Congress has appropriated more than $82 billion to support security in Afghanistan, which represents nearly two-thirds of all U.S. reconstruction funding for the country since 2002.

The international community has agreed to fund 352,000 security personnel, but only 272,465 soldiers and police were on the books as of late May, a strength shortfall of around 20%, SIGAR said.

The understaffing of Afghanistan’s security forces comes as violence in the country is rising, even as the U.S. and Taliban are engaged in a series of peace talks, the report said.

“Violence typically spikes around these talks when the parties seek to increase their negotiating leverage,” the report cited the Defense Department as saying.

NATO reported 6,445 enemy-initiated attacks throughout the reporting period, which covered the period from March through May. That number marked a 9% increase from the preceding three months but was down 10% from the same period last year.

More than half of the attacks occurred in just five of Afghanistan’s 34 provinces: Helmand, Badghis, Faryab, Herat, and Farah, the report said.

Afghan security forces, meanwhile, “increasingly targeted the Taliban with military pressure throughout the winter and into the spring to convince the Taliban that they cannot achieve their objectives by prolonging the conflict, and to set the conditions for a negotiated settlement,” the report said.

Of the most recent attacks, 43% resulted in casualties among pro-government forces, including the U.S. military, or civilians, according to the report.

Afghan National Security Advisor Hamdullah Mohib said in June that at least 50 people die every day in Afghanistan “in the fight against terrorism,” the report said.

While the number of civilians killed or wounded in Afghanistan has fallen significantly during the first half of this year compared to the same period in 2018, with 1,366 civilians killed and nearly 2,500 wounded, the toll was still “shocking and unacceptable,” the United Nations said Tuesday.