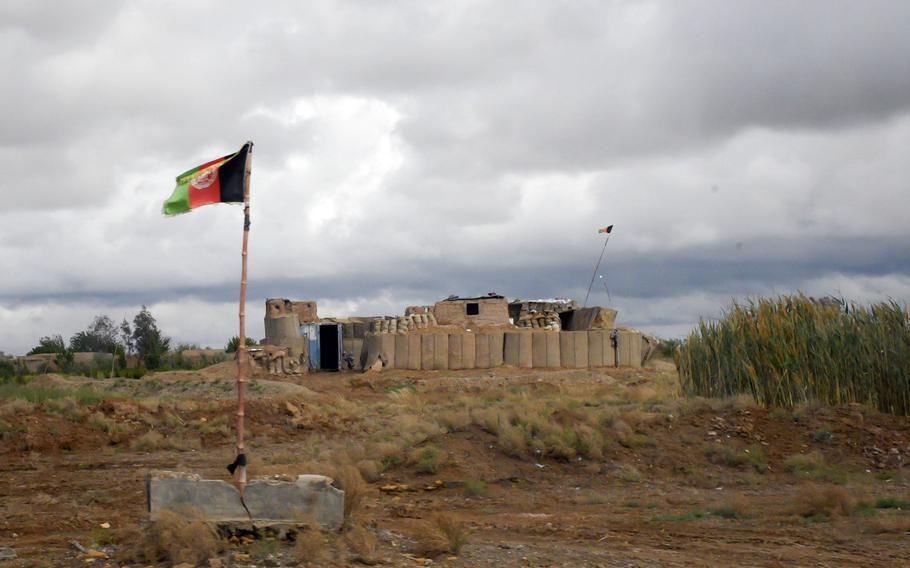 Buy Photo
A checkpoint guarding a highway outside Lashkar Gah, in Helmand province, April 16, 2019. Hundreds have died after the Taliban launched an offensive in the area in mid-October, leading the U.S. to conduct airstrikes against the militants, officials and news reports said on October 14, 2020. (J.P. Lawrence/Stars and Stripes)

KABUL, Afghanistan — Nine Afghan troops were killed when two helicopters collided in Helmand province, where fierce fighting between government forces and the Taliban has forced thousands from their homes and led to targeted airstrikes by the U.S. against the militant group, officials and media reports said Wednesday.

Technical problems caused two Soviet-era Mi-17 helicopters to collide and crash as they took off in Nawa district, just south of the provincial capital Lashkar Gah, in the early hours of Wednesday, the Afghan Defense Ministry said in a statement. Fighting between government forces and the Taliban has been raging in the district since the weekend.

Provincial governor Yasin Khan said airstrikes against the Taliban have continued since Monday, when U.S. Forces–Afghanistan spokesman Col. Sonny Leggett said the Americans had conducted two days of strikes against the militant group, in defense of Afghan forces.

“USFOR-A has & will continue to provide support in defense of the ANDSF under attack by the Taliban,” Leggett tweeted.

USFOR-A has not confirmed that the coalition is continuing to launch airstrikes in the province, and Khan said the Afghan air force has also been flying sorties against the Taliban.

USFOR-A commander Gen. Scott Miller has called on the Taliban “to immediately stop their offensive action in Helmand Province and reduce their violence around the country.”

The Taliban in February signed a deal with the U.S., agreeing, among other things, to not attack American or allied forces. Although the militant group did not commit in that deal to reducing violence or refraining from attacking Afghan cities, it struck verbal agreements to do both with the U.S., officials have said. The U. S., meanwhile, is on schedule to fulfill one of its key commitments under the February agreement — to withdraw all foreign troops from Afghanistan by May next year.

The Taliban spent six months planning their attack on Helmand’s capital and other provincial districts, Khan said in a statement. Peace talks between the Afghan government and the militants, which were called for in the February agreement between the U.S. and Taliban, were delayed for an equal amount of time, during which violence in Afghanistan has not subsided.

Hundreds of Afghans have been killed or wounded in the violence, the United Nations said, quoting local health facilities.

The clashes have forced thousands of Afghans to flee their homes, said Atiqullah, a local community leader from Nawa district, who like many Afghans goes by just one name.

“Nothing is left to us, we lost everything, including our home, property and livestock,” the Associated Press quoted him as saying after fleeing with his family to Lashkar Gah.

“The Taliban have launched attacks against security checkpoints, and they control most parts of Nawa district,” he said.