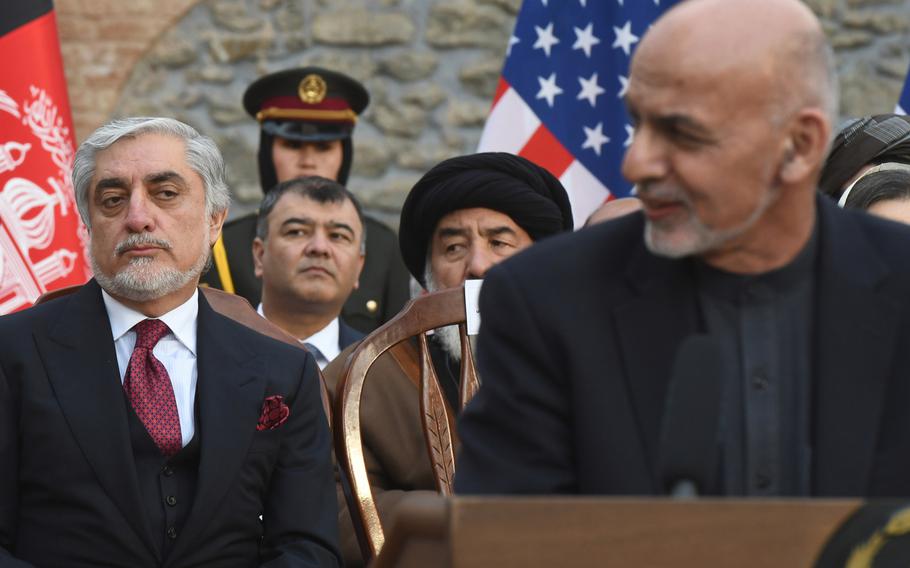 The ongoing feud is seen as one of several reasons for the delay in the country’s peace process and some experts worried it risked sparking an all-out civil war.

Ghani will remain president under the agreement, the text of which was released by state media, while Abdullah will head the government’s National Reconciliation Council and will lead peace talks with the Taliban.

The start of those talks is a key condition for the complete withdrawal of U.S. troops from Afghanistan by mid-2021, as outlined in February’s U.S.-Taliban deal. Several other factors have delayed the talks, originally slated to begin March 10.

News of Sunday’s agreement, which also says Ghani and Abdullah will be allowed to appoint an equal number of cabinet members, was welcomed by the U.S. officials, including Special Envoy Zalmay Khalilzad.

“The U.S. is prepared to partner with the new govt in a peace process that ends the war,” Khalilzad wrote on Twitter.

On Friday, Khalilzad said a new start date for the intra-Afghan negotiations was being discussed, despite lingering disagreements over a prisoner release and mounting violence across the country.

In March, Secretary of State Mike Pompeo announced Washington was withholding $1 billion in aid to Afghanistan this year and potentially another $1 billion next year if Ghani and Abdullah could not work out their problems. That had followed a visit by Pompeo to Kabul during which he was unable to broker a deal between the two men.

Afghanistan’s election commission in February declared Ghani the winner of the presidential poll, nearly five months after it was held. However, Abdullah rejected the results — citing fraud and other irregularities — held his own inauguration ceremony the same day as Ghani’s and vowed to form a parallel government.

The deepening political crisis led to concerns that the government would be divided and weak going into negotiations with the Taliban over the country’s future.

Abdullah also contested the results of the 2009 and 2014 elections. After the 2014 vote, then-U.S. Secretary of State John Kerry helped broker a deal that created the position of chief executive for Abdullah and named Ghani president. The discord highlights the difficulty of the U.S.-led mission in Afghanistan to foster a stable democracy in the country despite nearly two decades of reconstruction efforts.