Afghan pilots gunned down ahead of talks aimed at bringing peace 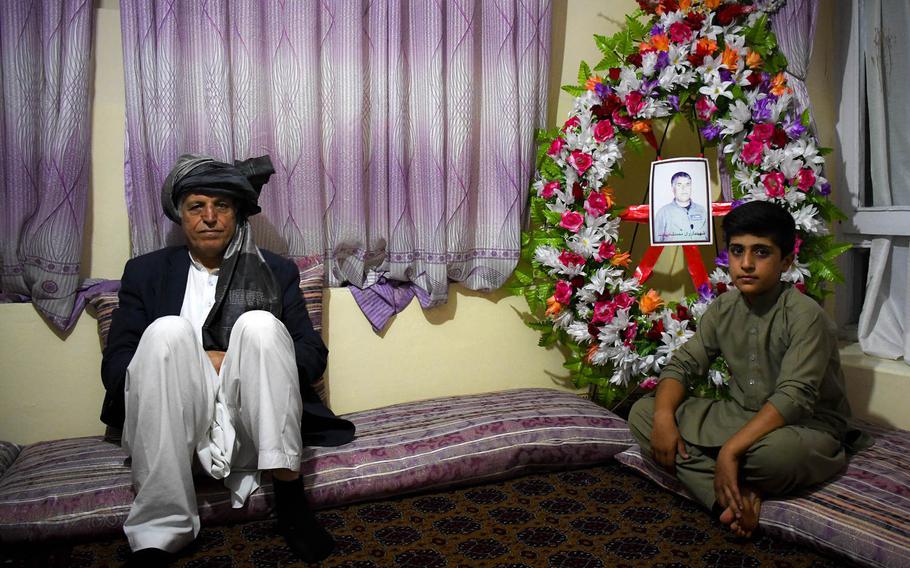 Buy Photo
Assassinations of Afghan pilots leave families like that of Mohammed Shah, killed in 2018, grieving and angry at a government they say did not protect their loved ones. (J.P. Lawrence/Stars and Stripes)

Buy Photo
Assassinations of Afghan pilots leave families like that of Mohammed Shah, killed in 2018, grieving and angry at a government they say did not protect their loved ones. (J.P. Lawrence/Stars and Stripes) In a screenshot from a 2017 NATO Resolute Support video, then-Capt. Mohammad Naiem Asadi talks about flying helicopters for the Afghan Air Force. Now a major, Asadi, who is said to have killed more Taliban than anyone else in the Afghan air force, went into hiding last year after the Pentagon reversed its decision to allow him to move to the United States with his family. (Resolute Support/DVIDS) KABUL, Afghanistan — An Afghan pilot was gunned down in a Kabul street this week, the second to die in an apparent targeted killing ahead of a second round of peace talks between the Taliban and government.

Gunmen on motorcycles killed the pilot and a civilian Thursday in western Kabul, said an Afghan defense official who asked not to be named because he was not authorized to discuss the matter. Officials did not immediately release the pilot's name.

Another pilot, Masood Atal, died outside his house in the southern city of Kandahar on Dec. 30. He was also gunned down by assailants on motorcycles, said Kandahar police spokesman Jamal Nasar Barakzai.

None of the militant groups active in Afghanistan, including the Taliban and Islamic State, has claimed responsibility for either killing.

The U.S. has spent years training Afghan pilots and invested billions in the country’s air force.

The deaths of the two pilots could weaken the government’s air power, which is seen as crucial to holding off the Taliban. The militants have stepped up attacks throughout the country over the last year – even as they have held talks with the U.S. and, since September, with the government, aimed at ending decades of war.

The intra-Afghan talks adjourned weeks after they started, with little to show in the way of progress and no let-up in violence against Afghans.

A second round is set to begin Saturday, Taliban spokesman Mohammad Naeem said this week on Twitter. The talks were mandated in the deal reached last February between the U.S. and Taliban, which also called for international troops to be withdrawn from Afghanistan by May this year. The number of U.S. troops in Afghanistan is expected to drop to 2,500 by mid-January.

But as the talks grind on, members of the security forces are being threatened and killed. Some have fled the country or gone into hiding.

Niloofar Rahmani, Afghanistan’s first female fixed-wing aviator, was granted asylum in the U.S. in 2018 after receiving death threats from the Taliban.

Mohammad Naiem Asadi, a helicopter pilot reputed to have killed more Taliban than anyone else in the Afghan air force, went into hiding last year after the Pentagon reversed its decision to allow him to move to the United States with his family.

Asadi had received numerous death threats from the Taliban and was approved to come to the U.S. in October, only to learn weeks later that authorization had been withdrawn.

At least 168 members of Afghanistan’s security forces died in targeted killings in 2020, a report published on Jan. 2 by the New York Times said. The U.S. has also accused militant groups of the targeted killings of scores of civilians and called on all sides in the conflict to reduce violence.