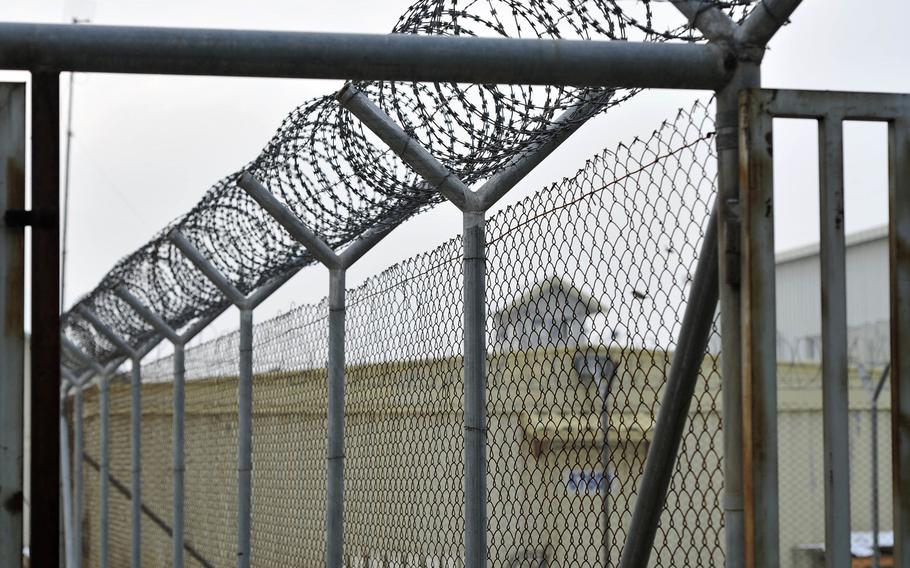 The Afghanistan National Detention Facility - Parwan. The Afghan government and the Taliban have said they will start releasing prisoners from each side by the end of the month, a key step to advancing the country's stalled peace process. (Bob Harrison/U.S. Forces Afghanistan)

The Afghanistan National Detention Facility - Parwan. The Afghan government and the Taliban have said they will start releasing prisoners from each side by the end of the month, a key step to advancing the country's stalled peace process. (Bob Harrison/U.S. Forces Afghanistan) 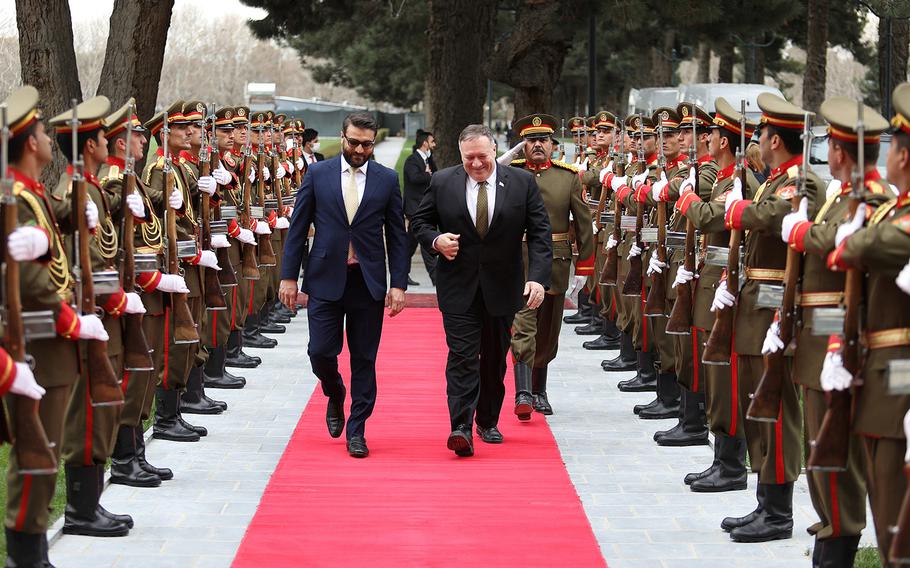 Secretary of State Mike Pompeo, right, and Afghan National Security Adviser Hamdullah Mohib arrive at the presidential palace in Kabul on Monday, March 23, 2020, when Pompeo paid a lightning visit to Afghanistan to try to resolve a political row that the U.S. says is stalling the peace process. ()

KABUL, Afghanistan — Thousands of prisoners in Afghanistan could start being released by early next week, fulfilling a key condition of the nearly month-old U.S.-Taliban deal to bring peace to the country, government and Taliban officials said.

The two sides agreed on the prisoner release Wednesday, days after Secretary of State Mike Pompeo said the U.S. would cut $1 billion in aid to Afghanistan after he wasn’t able during a lightning visit to Kabul to resolve an impasse between President Ashraf Ghani and his political rival, Abdullah Abdullah, over who won last year’s presidential election.

The rift between the two men has been blamed for stalling the peace process by delaying the naming of a government delegation to hold talks with the Taliban, another key condition of the Feb. 29 deal between the U.S. and Taliban.

But on Wednesday the government published the names of its delegates to the intra-Afghan talks with the Taliban. Shortly before that, the Taliban and the government said they’d reach a compromise on the prisoner release, which was supposed to start more than two weeks ago, after holding a four-hour video conference facilitated by Washington.

The government agreed to release 100 Taliban prisoners by the end of March, the National Security Council said in a statement released after the video conference. Details of further releases would be announced in the coming days, the statement said.

“It was decided in the virtual meeting that the process of the prisoner release will practically start on March 31,” Taliban spokesman Suhail Shaheen said in a tweet.

Members of the Taliban would visit Bagram prison — near the largest U.S. military base in Afghanistan — to identify detainees from its side that would be released, Shaheen said. He did not provide a timetable or number of Taliban prisoners who would be freed.

The U.S.-Taliban deal called for up to 5,000 Taliban and up to 1,000 detainees held by the insurgents to be freed by March 10, when intra-Afghan talks were supposed to begin. It spells out that freeing the prisoners and the intra-Afghan talks are conditions that must be filled if U.S. forces are to complete their withdrawal from Afghanistan by next spring.

But both the inmate releases and talks between the government and insurgents are behind schedule.

The Afghan government, which was sidelined from negotiations that led to the U.S-Taliban deal, initially balked at the prisoner release, saying it wanted assurances that freed Taliban fighters would not return to battle.

Ghani two weeks ago proposed a phased release of inmates who would have their biometric details recorded and sign a guarantee not to return to combat, but the Taliban rejected that offer, insisting 5,000 of their fighters must be released at once.

The Taliban and government representatives are expected to hold face-to-face talks in the coming days, the National Security Council statement said, to hammer out the details of the prisoner release and intra-Afghan talks, which would seek to map out a path to peace in the country.