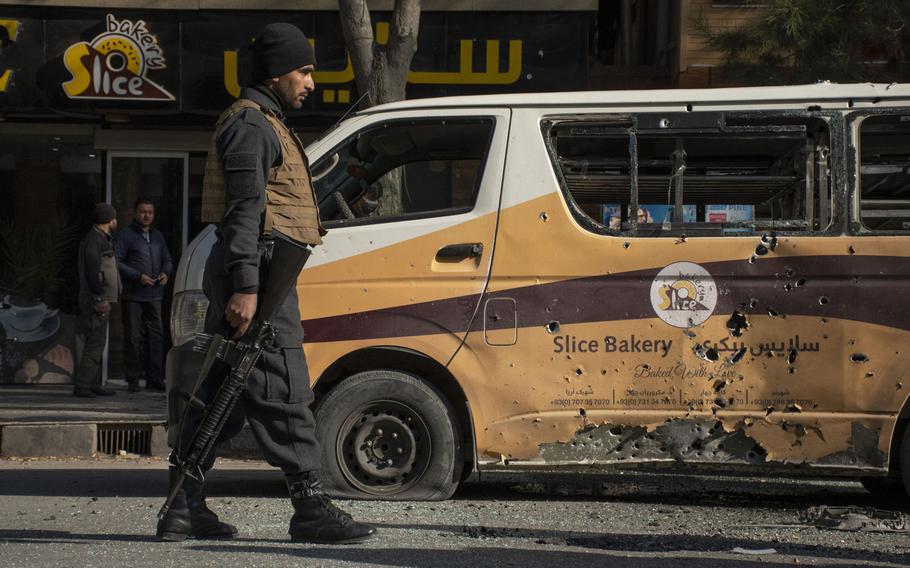 Buy Photo
An Afghan security official patrols a section of road in the Shar-e-Now area of Kabul, which was hit by rockets on Saturday, Nov. 21, 2020. The final months of 2020 saw a spike in the number of civilians killed and injured in Afghanistan, but the overall number of casualties last year fell to a seven-year low, the United Nations said Tuesday. (Phillip Walter Wellman/Stars and Stripes)

KABUL, Afghanistan — Civilian deaths and injuries in Afghanistan rose sharply in the final months of 2020, reversing a downward trend for much of the year, the United Nations said Tuesday.

More than 3,000 civilians were killed in the war last year and nearly 5,800 others were injured, marking the first time since 2013 that the combined figure was below 10,000, the U.N. said in a report.

Civilian deaths and injuries blamed on U.S.-led international forces were down 85% compared to 2019, the report said.

But in the three months after the Taliban and the Afghan government began peace talks in September, civilian deaths and injuries jumped 45% compared with the same period in 2019, the report said.

October saw the highest number of casualties of any month last year, and the number recorded the following month was the highest of any November since casualty figures began being tallied more than a decade ago, it said.

“2020 could have been the year of peace in Afghanistan. Instead, thousands of Afghan civilians perished due to the conflict,” said Deborah Lyons, the U.N. Secretary-General’s Special Representative for Afghanistan, who urged all parties to take steps to avoid more suffering.

Women and children continue to be disproportionately impacted by the conflict, constituting over 40% of civilian deaths and injuries, the U.N. said. The number of women killed last year — 390 — was the highest annual total since systematic documentation began 12 years ago, the report said.

The spike in violence in recent months has included a spate of killings targeting members of the judiciary, media and civil society. While most of those attacks have gone unclaimed, many followed Taliban threats.

The lower figures prior to September were largely due to fewer suicide attacks by insurgent groups after the U.S and the Taliban agreed last February not to attack each other, as part of a deal that could see all international forces withdraw from the country by May 1.

But Taliban violence has put that exit date in jeopardy.

The insurgents have ignored calls for a cease-fire and continued to attack Afghan forces, often catching civilians in the crossfire and causing more casualties than any other armed group last year, the report said.

“Ultimately, the best way to protect civilians is to establish a humanitarian ceasefire,” Lyons said in a statement. “Parties refusing to consider a ceasefire must recognize the devastating consequences of such a posture on the lives of Afghan civilians.”

Defense Secretary Lloyd Austin, who is leading a review of the U.S. military posture and other roles in Afghanistan, on Friday said the U.S. will “not undertake a hasty or disorderly withdrawal” from the country.

“Clearly the violence is too high right now and more progress needs to be made in the Afghan-led negotiations,” Austin said. “I urge all parties to choose the path towards peace. The violence must decrease now.”