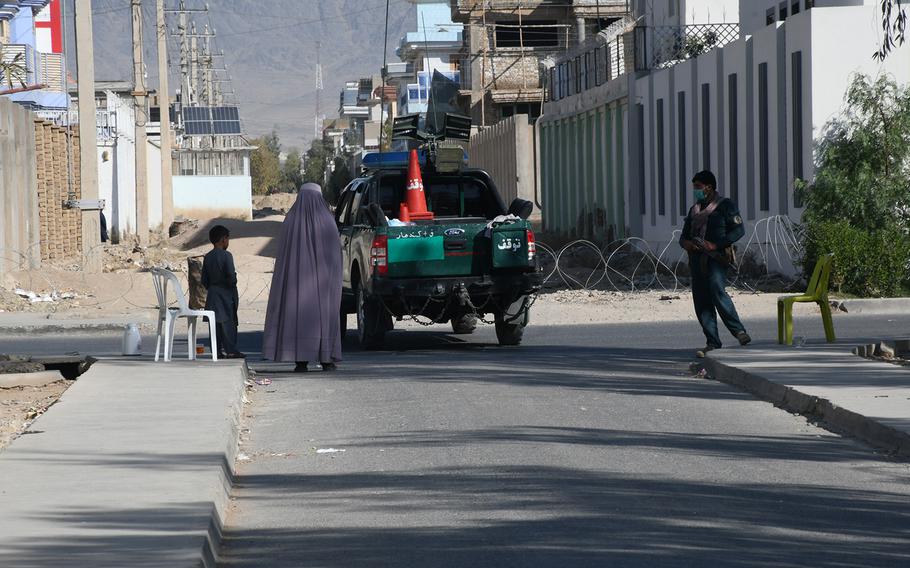 Buy Photo
A woman walks down a street in Kandahar, Afghanistan, on Oct. 27, 2018. An attack in the city in July killed seven civilians and wounded more than 70 others, according to the United Nations. (Phillip Walter Wellman/Stars and Stripes)

KABUL, Afghanistan — The war in Afghanistan killed and wounded more civilians in July than in any other month since May 2017, the United Nations said Saturday.

More than 1,500 civilian casualties were documented last month as peace efforts to end the U.S.’s longest war continued, the U.N. said in a statement.

The preliminary figures were released just days after the U.N. announced that the number of noncombatants killed and injured in the conflict had dropped by over a quarter during the first half of this year compared to the same period last year.

The findings were released as U.S. and Taliban officials in Doha prepared to hold their latest round of direct talks aimed at ending the 17-year war.

“As peace efforts have intensified in recent weeks so too has the conflict on the ground,” said Tadamichi Yamamoto, the U.N. Secretary-General’s Special Representative for Afghanistan.

“I call on all parties not to ramp up military operations thinking that doing so will give them a stronger position in talks about peace,” Yamamoto said. “Escalating the conflict will have one primary result: greater loss of civilian life.”

The U.S. in recent months has increased military pressure in support of a negotiated settlement with the Taliban, but in doing so, it has contributed to a record number of Afghan civilians killed by airstrikes, according to U.N. data, which the U.S. military disputes.

Taliban spokesman Zabihullah Mujahid dismissed claims that the group had increased attacks, including those on civilian targets, to gain leverage in the peace negotiations. He told Stars and Stripes that operations were “normal” for this time of the year.

“From the American side, it looks like they have increased their bombardments and cruelties, and we are forced to target the enemy and eliminate them,” Mujahid said.

One such attack, on an Afghan army logistics center in Kabul on July 1, killed seven civilians and injured over 140 others, officials said.

On Tuesday, the U.N. released a report that documented 1,366 civilians killed and 2,446 wounded in the conflict between January and June. The combined number of casualties was down 27% compared to the same period last year. Fewer suicide attacks by militants was a reason for the decrease, the U.N. said.

U.S. special envoy for peace Zalmay Khalilzad arrived in Qatar on Friday for the latest round of negotiations with Taliban officials.

“The Taliban are signaling they would like to conclude an agreement. We are ready for a good agreement,” Khalilzad said on Twitter.

The Washington Post, citing unnamed sources, reported Thursday that the Trump administration was preparing to reduce the number of U.S. troops in the country from 14,000 to between 8,000 and 9,000 in exchange for Taliban guarantees, including a promise not to harbor terrorists.

The Taliban has said it will not meet with the Afghan government to work out a political settlement and cease-fire until a timeline for the complete withdrawal of international forces is announced.

The U.N. on Saturday called on all parties to work toward a political solution.