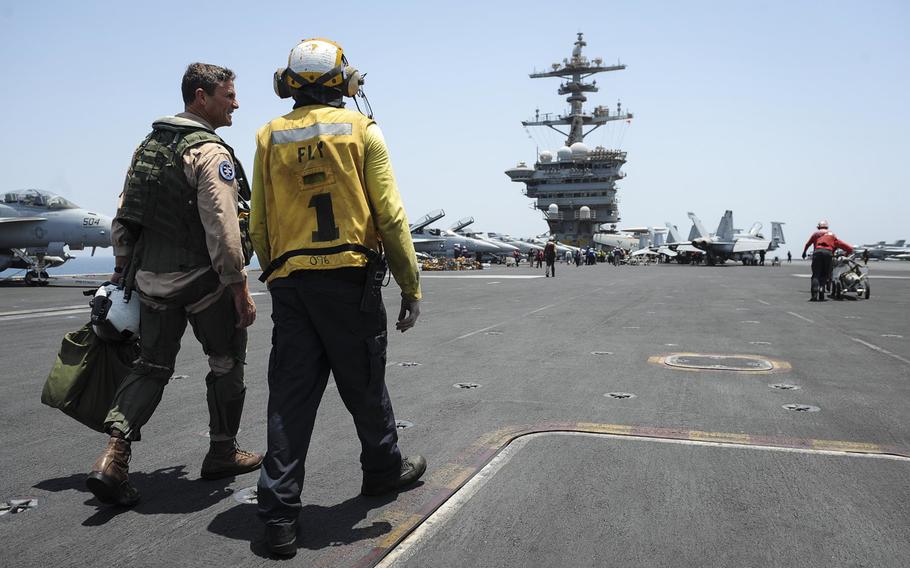 Rear Adm. Andrew Lewis, commander of Carrier Strike Group 12, talks to a sailor after his last flight aboard the aircraft carrier USS Theodore Roosevelt, which is deployed in the Persian Gulf, on July 17, 2015. (Anna Van Nuys/U.S. Navy)

WASHINGTON — The United States will not have an aircraft carrier deployed to the Persian Gulf this fall for the first time in years, and the rare gap could hinder military capabilities in the war against the Islamic State, the Obama administration’s nominee to lead the Navy told the Senate on Thursday.

Adm. John Richardson conceded the effects of a two-month gap in carrier presence — the first since 2007 — under intense questioning from Sen. John McCain, R-Ariz., as the Senate Armed Services Committee weighs whether to approve the admiral’s nomination as chief of naval operations.

“Without that carrier, that will be a detriment to our capability, yes, sir,” Richardson said.

The USS Theodore Roosevelt is currently deployed to the region and has been launching strikes against targets in Iraq and Syria as the U.S. and coalition forces struggle to make headway in the year-old war against the Islamist hardliners there.

In addition, U.S. officials say the recent agreement to curb Iran’s nuclear program in exchange of sanction relief hasn’t alleviated concerns about Iranian power in the Middle East. Arab countries in the Gulf are concerned Iran will use additional funding to support terrorism within the region.

Still, the Navy is shouldering budget cuts and a limited number of ships. The Joint Chiefs of Staff recommended the gap in carrier operations, the current Chief of Naval Operations Adm. Jonathan Greenert told Stars and Stripes in a recent interview.

“In the intent of the Joint Staff, it was determined that appropriate replacement or substitute can be made for a carrier or carrier strike group,” Greenert said.

Richardson told the Senate that the military would work to mitigate the gap left by a carrier by using land-based aircraft, but did not elaborate.

The U.S. and Turkey recently announced expanded coordination on the war in Iraq and Syria that includes Turkish permission for the U.S. to use its air base at Incirlik for bombing runs. The move could be a significant breakthrough in the war effort, giving the U.S. closer access to Islamic State targets in northern Syria and Iraq. But carriers have given key support to the current air campaign, the previous Iraq war and stability in the region.

Roosevelt-based aircraft fly about one-third of the aircraft sorties supporting Operation Inherent Resolve, according to the Navy. Last fall, President Barack Obama ordered the USS George H.W. Bush on station in the Persian Gulf to respond to the Islamic State’s advance in Iraq.

The Roosevelt carrier strike group was also recently dispatched to Yemen as that country devolved into violence.

“So, now you believe that land-based air can replace the presence of a carrier?” McCain asked.

Others remain skeptical about taking a carrier out of the Middle East.

“It reduces the president’s options,” said Bryan McGrath, former naval officer who now runs the consulting firm FerryBridge Group. “Aircraft carriers are so powerful because we can relatively quickly move it in position where we need it and use it without anyone’s permission.”

The increased demand for carrier strike groups in recent years has worn down the force and led the Navy to not schedule a continuous presence in its operating theaters in fiscal 2016, said Lt. Tim Hawkins, a Navy spokesman. The service will have 11 carriers when the USS Gerald Ford enters service next year.

By planning a carrier gap, the Navy is working toward having a fleet able to deploy on a moment’s notice while not shortening the fleet’s lifespan.

“We have to get to a point where we can sustain the pace without breaking our force,” Hawkins said.

But the force isn’t there yet.

“We don’t have the flexibility to have a carrier there if we need one, because we just don’t have them,” said Bryan Clark, a senior fellow and primary naval analyst at the Center for Strategic and Budgetary Assessments.