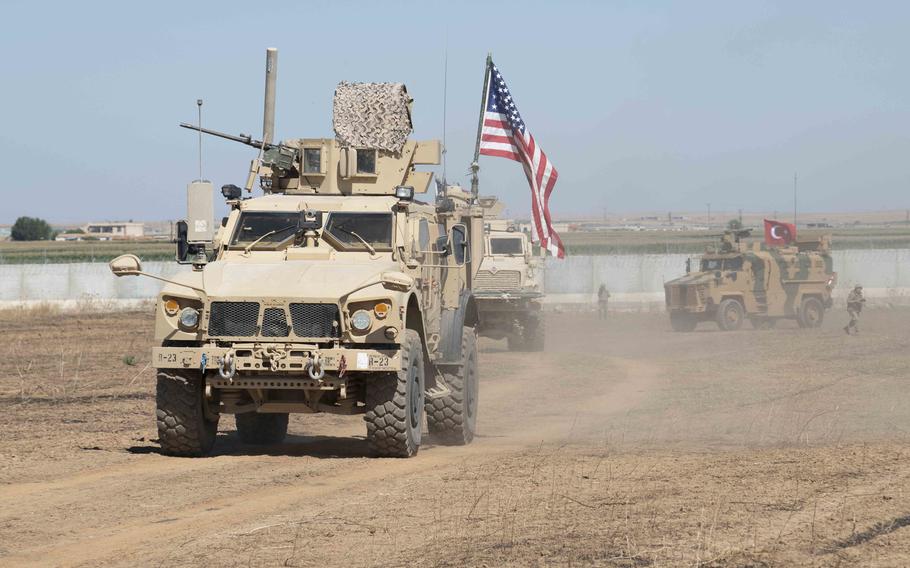 U.S. and Turkish military forces conduct a joint ground patrol in northeast Syria in September 2019. Sgt. 1st Class Robert Nicoson is facing charges stemming from a Aug. 17, 2020 incident when U.S.-led coalition and partner forces returned fire after an attack on their convoy near a Syrian military checkpoint. ( Alec Dionne/U.S. Army)

An 82nd Airborne Division soldier is facing charges stemming from a deadly firefight in Syria between U.S. forces and those backing the regime of President Bashar Assad.

Sgt. 1st Class Robert Nicoson, the platoon sergeant on a patrol that came under fire in August near the northeastern Syrian town of Qamishli, faces an Article 32 hearing later this month, similar to a civilian grand jury proceeding, to review evidence against him on several charges related to that and at least one earlier incident.

The charges include two counts of failure to obey an order or regulation, two counts of reckless endangerment, one count of communicating threats and three counts of obstructing justice, division spokesman Lt. Col. Mike Burns said last week after Army Times reported on the case.

The gun battle broke out on what the U.S.-led coalition described at the time as a routine anti-Islamic State patrol, one of several altercations last year between U.S. military patrols and pro-regime Syrian forces or their Russian backers in the civil war that began in 2011.

The Americans had received “safe passage” from Syrian forces but took fire as they passed, the U.S.-led Operation Inherent Resolve said in a statement at the time. Coalition ground forces returned fire but supporting aircraft overhead didn’t strike.

A Syrian fighter was killed and two others were wounded in the incident. There were no coalition casualties.

Nicoson had been under consideration for a Bronze Star with valor device for his actions during the firefight, at least until September, said Phillip Stackhouse, his civilian attorney.

It’s unclear what changed, but the charges are based on a “very thin” inquiry conducted by the Army Criminal Investigation Command, Stackhouse said Friday by phone.

Military officials declined to discuss the charges against Nicoson, who was with the 82nd Airborne Division’s Blackhorse Troop, 1st Squadron, 73rd Cavalry Regiment. Stackhouse said the allegations also involve an incident at a checkpoint in June.

He believes the soldier’s command conducted two of their own investigations, but has not yet seen them, and has requested more time to review the evidence and interview witnesses.

The military alleges that Nicoson put the platoon at risk by going somewhere they shouldn’t have been and then threatening Syrian forces before the fighting broke out. They do not allege misconduct during the actual gun battle or say that Nicoson started it, Stackhouse said.

The patrol was supposed to keep its distance from regime forces, but somehow ended up at the checkpoint, he said. Their movements were being reported to higher authorities and Nicoson was in a vehicle at the rear, Stackhouse said, “and yet they want to hold him accountable for coming within 2 kilometers of a checkpoint.”

The platoon commander, who was in a vehicle nearer the front of the column, received a general officer memorandum of reprimand, Stackhouse said, but he is not facing charges like his client.

“How does the platoon sergeant go to a general court-martial when perhaps the appropriate resolution to what occurred that day was an administrative counseling … if that’s what his platoon commander got?” he said.

While Nicoson awaits a hearing, the father of two is unable to use G.I. Bill benefits, attend military schools or receive other favorable actions such as promotions, his wife said in a public Facebook post last week.

“This has been a devastating event in our lives,” Beverly Nicoson, an 8-year veteran herself, wrote on Thursday, though her account appears to have been deleted since.