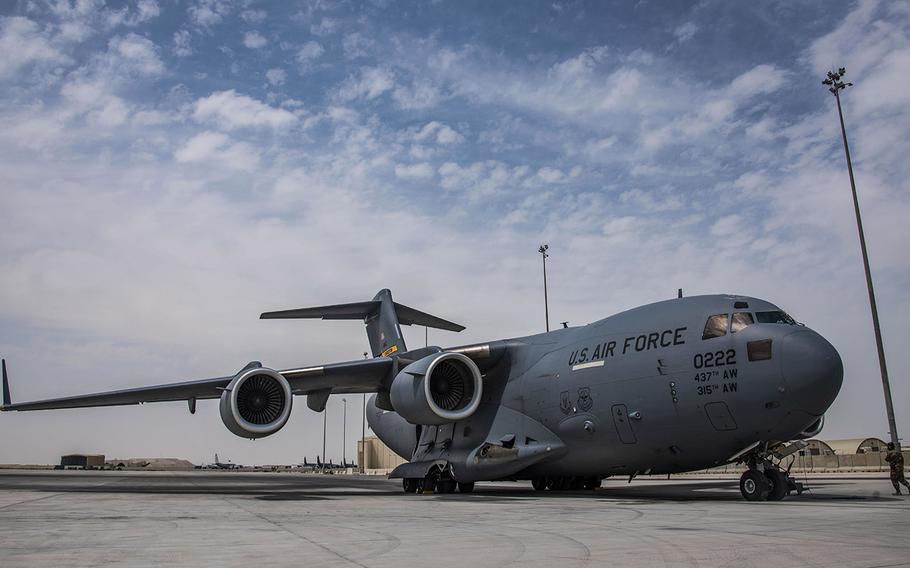 In an April 27, 2021 photo, a C-17 Globemaster III assigned to Joint Base Charleston, S.C., parks on the flight line at Al Udeid Air Base, Qatar. C-17s and other mobility aircraft around the U.S. Air Forces Central theater are assisting with the safe and orderly drawdown operations from Afghanistan. (Kylee Gardner/U.S. Air Force)

ATLANTA — U.S. military officials said they had removed some 60 planeloads of gear from Afghanistan and identified about 1,300 pieces of equipment for destruction by Tuesday as the Pentagon works to exit the country where American troops have been at war for nearly 20 years.

The drawdown effort to remove U.S. forces and the warfighting gear that they have spread across Afghanistan since invading in October 2001 was roughly 2% to 6% completed by Tuesday, U.S. Central Command said in a statement. The formal retrograde process began Saturday as the Pentagon works to remove more than 3,000 troops, thousands of U.S. contractors and their equipment by Sept. 11, the date that President Joe Biden decided he wanted all American forces to be out of the country.

Air Force C-17 cargo jets, which the service said can carry about 17,900 pounds of cargo, are running near around-the-clock missions to move military equipment out of Afghanistan in the Pentagon’s largest drawdown effort since it left Iraq in 2011, officials said. The CENTCOM statement on Tuesday indicated officials intended to provide regular updates on retrograde progress but would give only an estimated range of the completion for security reasons.

CENTCOM also said it had turned over one base to the Afghan National Army — Camp New Antonik in southern Helmand province.

While U.S. forces will leave some gear behind for the Afghan troops and government and destroy some of its gear, the equipment it removes from Afghanistan will largely be moved elsewhere to bolster other military operations around the globe, officials said.

For the Army, gear could return to units in the United States, go to depots for repairs and upgrades, or be sent to other regions where soldiers are operating, said Curt Higdon, the chief of war plans and strategy for Army Materiel Command, which is responsible for the Army’s Afghan drawdown operations.

The United States has been planning for years for its eventual drawdown from Afghanistan as former Presidents Barack Obama and Donald Trump indicated they had hoped to withdraw all troops from the country. Higdon said those long-laid plans would help to make a quick drawdown possible, even as he and other U.S. officials worry the Taliban could renew violence against American and NATO troops.

The Taliban agreed to halt attacks on U.S. and NATO forces last year as part of a peace accord struck with Trump’s administration in February 2020. But the Taliban has since warned the U.S. failure to exit by the agreed upon date of May 1 could result in renewed attacks.

The Pentagon on Monday said it had seen some low-level “harassing attacks,” but no major assault against American troops.

Higdon said he expected the withdrawal process to go smoothly because defense officials have long expected to leave Afghanistan. The Army has already closely tracked its equipment in preparation to leave, he said.

Army Materiel Command — and other organizations responsible for drawdown logistics — also must consider the cost of moving equipment and its value to troops outside Afghanistan to determine what gets move, what gets turned over to the Afghan government and what gets destroyed, Higdon said.

Officials said Tuesday that the 1,300 pieces of gear marked for destruction was the first wave of gear to be destroyed during the monthslong drawdown.

Much of the gear deemed not cost-effective to move is expected to be handed off to the Afghans or stay with U.S. officials manning the American embassy in Kabul. The rest, including gear American officials worry could end up in Taliban hands, will be destroyed.

“We just can't turn it over,” Higdon said. “We have concerns about turning [gear] over if it could potentially cause someone to get hurt.

“So, maybe it sounds like, well, you guys are just cutting things up, but it’s because it’s not cost-effective to bring back, and we can’t just leave it there.”