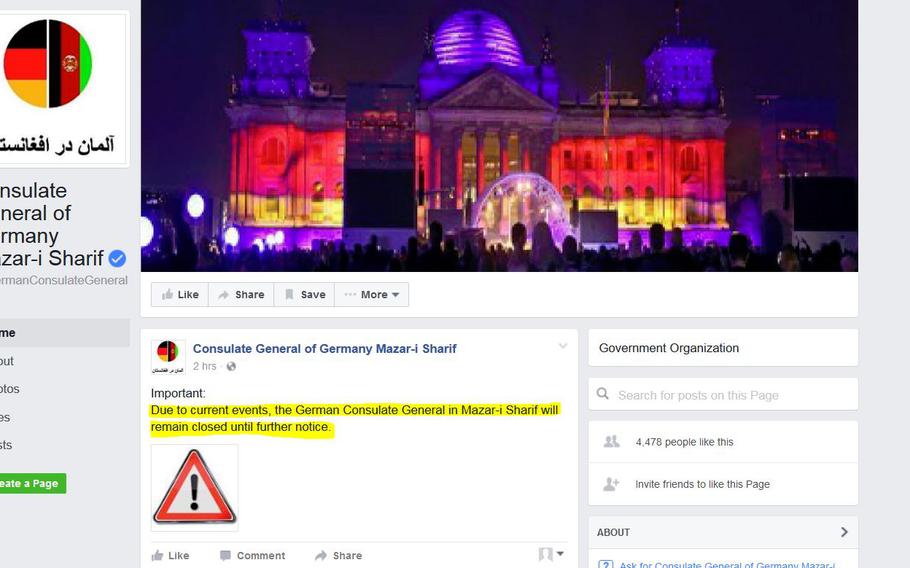 KABUL, Afghanistan — A suicide attack on the German consulate in the city of Mazar-e-Sharif has killed at least four civilians and wounded more than 120 others, Afghan officials said Friday.

“The attacker drove a vehicle full of explosives” into a gate at the consulate, said Abdul Razaq Qaderi, a police official in northern Balkh province, where Mazar-e-Sharif is situated. “It shattered windows 3 miles from the scene.”

The explosion, which occurred about 11:00 p.m. on Thursday, destroyed parts of the consulate, and nearby homes and shops, Qaderi said.

Germany's Foreign Ministry said all consulate employees were safe and unhurt after Thursday’s attack, which Afghan President Ashraf Ghani called a "crime against humanity and all international laws."

The provincial hospital received four dead bodies and 85 wounded people after the explosion, said Dr. Noor Mohammad Faiz, the hospital head. Thirty other wounded people, all civilians, were taken to a private hospital, he said.

Women and children were among the wounded, Faiz said.

The Taliban claimed responsibility for the attack.

"This attack was carried out as a revenge for the bombardment by foreign forces that killed civilians," Taliban spokesman Zabihullah Mujahid said in a statement on the group’s website.

Mujahid was referring to a joint mission by Afghan and NATO forces earlier this month near the northern city of Kunduz that Afghan officials said had targeted Taliban commanders who were preparing a major offensive on the city.

Germany leads NATO’s diplomatic mission in northern Afghanistan and has nearly 1,000 troops in the country.

NATO’s Resolute Support mission said it had deployed its quick-reaction force to assist German troops at the consulate and help evacuate all 21 staff members to nearby Camp Marmal.

“This attack by the Taliban once again shows that they use violence indiscriminately and without regard for the safety of civilians,” said Lt. Gen. Sandy Storrie, Resolute Support's deputy commander. “We condemn this attack and pledge that we will continue our mission to help the Afghan government and the Afghan people achieve peace, security and stability.”