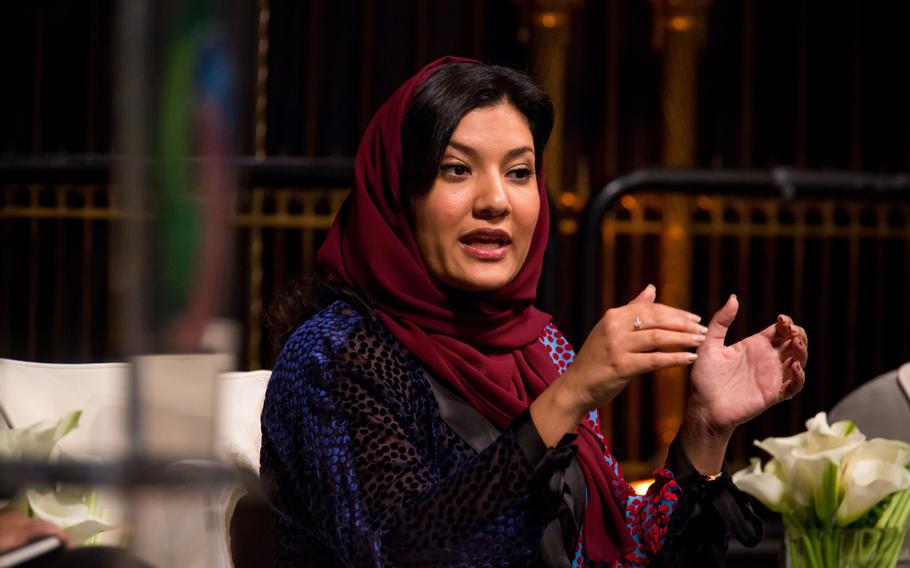 Just before the coronavirus pandemic shut down travel last spring, the princess who’s Saudi Arabia’s ambassador to the U.S. paid a visit to the Wyoming Supreme Court in Cheyenne to talk about women’s rights with the tribunal’s three female jurists.

And in October, she joined the monthly meeting of the Chamber of Commerce’s Women Mentoring and Networking Committee in Sioux City, Iowa, to discuss the role of women in the workforce, after being introduced by the executive director of the Iowa Poison Control Center.

Her ambassadorial visits to the American heartland underscore how Saudi Arabia has shifted its focus outside of Washington. The princess is leading a campaign to rehabilitate her country’s image after blows such as the 2018 slaying of Washington Post columnist Jamal Khashoggi and Riyadh’s involvement in the war in Yemen — and the loss of close ally Donald Trump as president.

“I would call it reputation laundering,” said Ben Freeman, the author of a May report on the country’s lobbying efforts.

LS2 contacted state-level figures, such as legislators in South Dakota and nonprofit leaders in Pennsylvania, for the kingdom, according to the FARA disclosures. After oil prices plunged below zero for the first time last year, the firm offered the embassy’s spokesperson to local radio shows in Texas and the Midwest for interviews, including an instance where LS2 highlighted Iowa’s ethanol fuel production in the context of global energy markets.

The list of local groups LS2 has courted is extensive. Disclosures show that LS2 had phone calls with officials at the Maine Lobstering Union, which advocates for lobstermen and the fishing industry, and the Metro Atlanta Chamber of Commerce, among dozens of others. The Saudi embassy also held virtual events with the Indiana Council on World Affairs, where the princess spoke about U.S-Saudi ties, and Michigan State University, which featured the embassy spokesperson, according to LS2’s filings.

“It’s all just part of a bigger push for them to remind people out in America about whatever ties they have to Saudi Arabia,” Freeman, director of the Foreign Influence Transparency Initiative at the Center for International Policy, said in an interview. The center is an independent nonprofit that researches issues including war, corruption and climate change with funding from groups such as the Ford Foundation and Rockefeller Brothers Fund.

The Maine Lobstering Union and the Indiana Council didn’t respond to requests for comment, while the Metro Atlanta Chamber of Commerce and Michigan State didn’t provide an immediate comment.

As the kingdom slashed its lobbying spending, it shifted its focus outside the nation’s capital.

“We appreciate the fact that Americans outside Washington are interested to learn more about developments in Saudi Arabia, and many, including the business community, academic institutions and civil society groups, are keen on maintaining longstanding relations with the kingdom or cultivating new ones,” Fahad Nazer, a spokesman for the Saudi embassy in Washington, said in an email.

Events tarnishing the kingdom’s reputation included the slaying of Khashoggi in 2018 inside the Saudi consulate in Istanbul, Turkey. U.S. intelligence agencies concluded that Crown Prince Mohammed bin Salman signed off on the operation. The prince has denied involvement in the killing, and the kingdom has rejected what it called a “false” U.S. narrative.

Also weighing on the country’s image is its war with Iranian-backed Houthi rebels in Yemen, which has been deemed the world’s worst humanitarian crisis by the United Nations. And its oil price war with Russia drew the ire of other oil-producing states.

The kingdom lost a strong supporter in Washington when Trump, who made Saudi Arabia the centerpiece of his Middle East policy, lost the presidency. By contrast, President Joe Biden released the intelligence report on Khashoggi’s killing, although his administration stopped short of imposing sanctions directly on the crown prince.

Princess Reema arrived in early 2019, charged with the daunting mission of repairing U.S.-Saudi relations. She maintained a low profile in Washington as lawmakers from both parties tried to penalize the kingdom with sanctions and military aid cuts.

With a degree from George Washington University and a reputation as an advocate for women, she embarked on a tour around the U.S., touting Saudi Arabia’s advances in human rights and promoting stronger economic ties. USA Today reported earlier on her outreach campaign.

The princess — who is Saudi Arabia’s first female ambassador — is a member of the kingdom’s ruling family through her grandfather, who was the brother of King Salman. She is the daughter of Prince Bandar bin Sultan, an influential former ambassador to the U.S. who was nicknamed “Bandar Bush” for his closeness to the Bush family. He maintained a legendary diplomatic network and held significant influence throughout his 22 years in Washington.

Saudi Arabia’s plan called for LS2 to work with state and local leaders to organize events with Princess Reema and other high-level officials from the kingdom, according to Freeman of the Center for International Policy. Then the law firm Hogan Lovells, which has been contracted by Saudi Arabia for about 14 years, would convey news of the event to the Washington lawmakers representing the district where the event took place. Hogan Lovells declined to comment, and LS2 referred comment to the Saudi embassy.

“It is vital for the embassy to engage with these groups, not only to highlight how close Saudi-U.S. ties have advanced the interests of both nations and how the relationship has positively impacted the various states going back decades, but also to explore opportunities for more collaboration between our two peoples,” said Nazer, the Saudi embassy spokesman.

Although many lobbyists severed their contracts with the kingdom after the Khashoggi killing, the country still engages several Washington-based companies, including law offices Hogan Lovells and King & Spalding, with which it has long-term ties, and Qorvis, a public affairs firm. Last year, Hogan Lovells received the highest payout among the kingdom’s lobbyists, earning $2 million, data collected by the Center for Responsive Politics shows.

In 2020, lobbyists for Saudi Arabia reached out to congressional offices about 700 times, which may seem like a lot, but actually represents a decline, Freeman said. “By just about any other country’s standards, that would be enormous,” Freeman said. “But in previous years we’ve seen the Saudis contact Hill offices more than a thousand times. This is absolutely the lowest number that we’ve ever seen.”

Saudi Arabia slashed its lobbying spending 76% over the past three years from a high of $34 million in 2018.

The kingdom’s change in tactics coincides with a broader shift in U.S. lobbying by Arab countries. After a Saudi-led boycott in the Persian Gulf, Qatar significantly ramped up its lobbying efforts in the U.S. With Trump out of the Oval Office, it saw an opportunity to gain influence with the Biden administration and quickly hired seven firms in three months to do lobbying and consulting work.

The United Arab Emirates has pursued a similar strategy to that of the kingdom in recent years, but the UAE’s lobbying spending far outstrips that of its two neighbors. It spent $16 million in 2020, while Qatar spent $11 million and Saudi Arabia $8 million.

In addition to several local public diplomacy initiatives across the U.S., such as an $800,000 donation to Houston’s Flores Neighborhood Library after Hurricane Harvey, the UAE also maintains a heavy focus on Washington, where high-profile firms advise them on issues ranging from arms sales to cybersecurity.

Even with rising competition from its Gulf neighbors in the Washington influence game, Princess Reema’s ongoing cross-country tour shows that Saudi Arabia is working to rebuild its relationship with the U.S. from the ground-up, state-by-state, while it waits for the dust to settle in the nation’s capital.