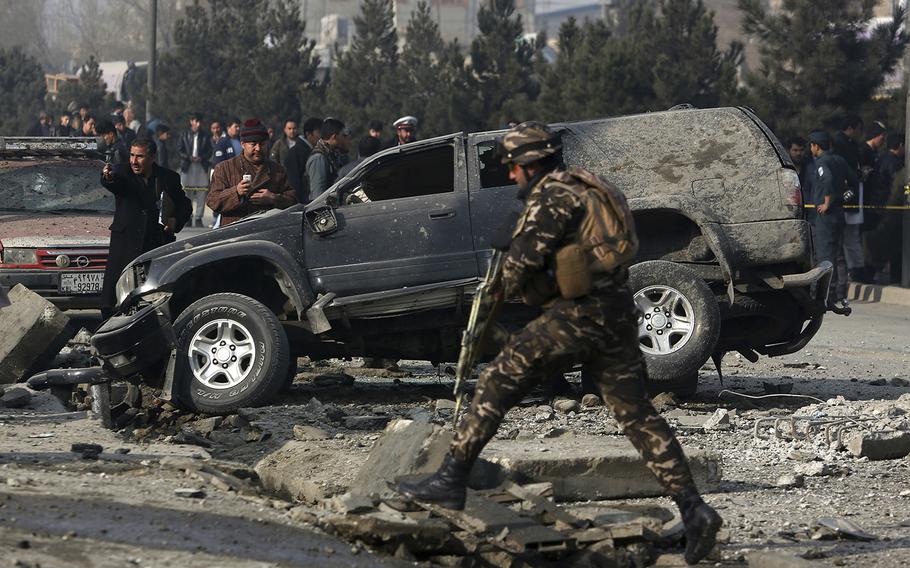 Afghan security personnel inspect the site of a roadside bomb blast in Kabul, Afghanistan, Wednesday, Dec. 28, 2016. A U.N. report released Monday said that a record number of civilians were injured or killed in 2016 in the war in Afghanistan. (Rahmat Gul/AP)

KABUL, Afghanistan — U.S. airstrikes in Helmand province’s Sangin district on Thursday may have killed as many as 25 civilians, the same day that two American soldiers were wounded in clashes in the fiercely contested area, officials said.

The U.S. troops were injured while supporting Afghan forces, who have been battling the Taliban in the district for weeks. The militants see Sangin as a stepping stone to encircling and eventually capturing Helmand’s capital, Laskhar Gah.

One of the American soldiers suffered a gunshot wound and was flown out of the country for treatment. The other suffered minor shrapnel wounds and returned to duty, Brig. Gen. Charles Cleveland, spokesman for U.S. Forces-Afghanistan, said Saturday.

Cleveland said the U.S. had been conducting airstrikes in the area before the soldiers were wounded.

Hayatullah Mayar, a provincial council member in Helmand, said Thursday’s strikes hit local homes, resulting in the deaths of between 20 and 25 civilians.

“To avoid being bombed, the Taliban are hiding in people’s homes, and that’s why the civilians’ houses were hit,” Mayar said. "According to our initial information, all members of two families were killed, including women and children, and a number of Taliban were also killed.”

The Helmand governor’s office said 60 Talibs, including eight commanders, were killed in the operation but denied any civilian deaths.

“All the targets were clearly Taliban gatherings; there were no civilians killed in those attacks,” a statement by the office said.

Sangin has seen heavy fighting over the past two years as the Taliban attempt to take control of Helmand. Two weeks ago, militants detonated bombs under an army post, using tunnels they had dug under the city center.

The district was the scene of some of the fiercest fighting from 2009 and 2011, when U.S. Marines attempted to wrest control of the province from the Taliban.

“As with all claims of civilian casualties, we will investigate them to determine what the facts are and whether civilians were hurt or killed as a result of our operations,” he said.

“We take every precaution to prevent and mitigate civilian casualties, and we take every allegation seriously.”

Airstrikes by Afghan and international forces caused 590 civilian casualties, including 250 deaths, last year — nearly double the number recorded in 2015 and the highest since 2009, the United Nations said in a report released this week.

U.S. officials confirmed American troops were operating in Helmand but, citing security ‎concerns, would not discuss their specific roles.

The Marines said last month that some 300 troops would deploy to Helmand in the spring, when fighting with insurgents traditionally intensifies.

The White House in June expanded the U.S. military’s role in Afghanistan beyond assistance and advising, allowing troops to occasionally accompany Afghan forces in their operations.