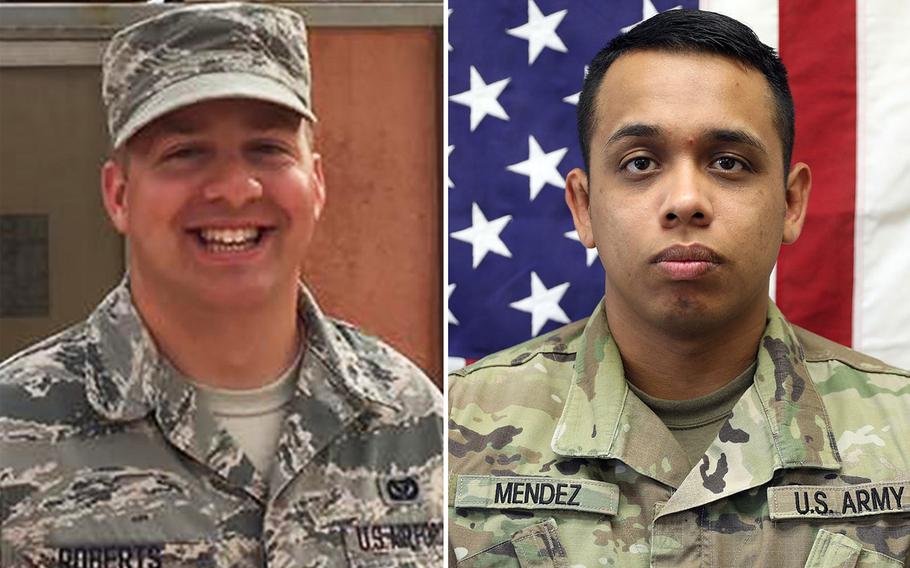 The two Americans killed in a rocket attack on Camp Taji in Iraq Wednesday included the first Oklahoma Air National Guard member killed in action since the 9/11 attacks, officials said.

The Defense Department on Friday identified Air Force Staff Sgt. Marshal D. Roberts, 28, of Owasso, Okla. and Army Spc. Juan Miguel Mendez Covarrubias, 27, of Hanford, Calif. as the two U.S. service members killed in the attack on the training base north of Baghdad.

Mendez Covarrrubias, a member of the 1st Cavalry Division’s 1st Air Cavalry Brigade out of Fort Hood, Texas, was promoted to specialist following his death.

“The international military Coalition is capable and credible because of warriors like Juan, Brodie, and Marshal,” said Lt. Gen. Pat White, Operation Inherent Resolve commander. “They volunteered to serve the United States and United Kingdom to improve their lives and help keep the world free from ISIS terrorism. Our fallen comrades have a legacy that will never be forgotten.”

The Oklahoman, who joined the service in May 2014, was the squadron’s senior personnel noncommissioned officer on the deployment, the state’s military department said in a statement.

Twenty Oklahoma Guardsman have died while deployed overseas since Sept. 11, 2001, the statement said, but Roberts was the first in the state’s Air National Guard to be killed in combat action.

“We are devastated by the loss of Staff Sgt. Roberts who served selflessly and with honor,” said Maj. Gen. Michael Thompson, the state’s adjutant general. “I ask that every Oklahoman pray for the family of this fallen patriot and keep them in your thoughts in the days and weeks ahead.”

Mendez Covarrubias joined the Army in June 2017 as a signal support systems specialist and served with the brigade’s 1st Battalion, 227th Aviation Regiment since March 2019, Fort Hood said in a statement.

“The regiment and his fellow Soldiers are grieving the loss of a true warrior,” his battalion commander Lt. Col. Adam S. Camarano said in a statement. “Command Sergeant Major Travis Eicher and I would like to express our most sincere condolences to the family and friends of Specialist Mendez Covarrubias. His loss is felt across our formation and he will not be forgotten.”

In addition to the three coalition deaths, 14 service members with the international anti-Islamic State alliance were wounded in the attack, which the U.S. has blamed on Shiite militias linked to Iran.

The strikes were meant to degrade the militia’s ability to attack U.S. forces and to send a “clear, unambiguous signal” that such strikes would not be tolerated, McKenzie said.

“We always reserve the right to defend our forces whenever they are attacked or threatened,” McKenzie said.