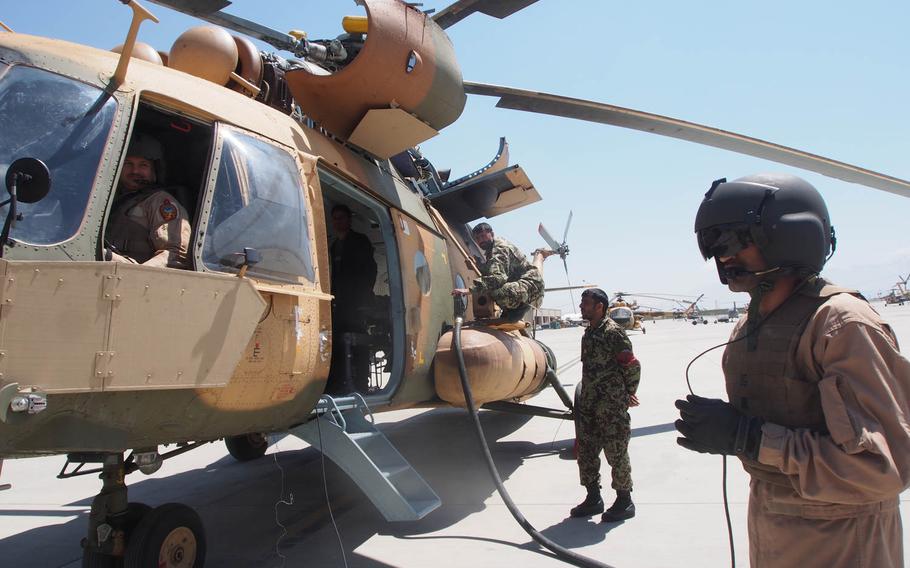 In this file photo from 2014, an Afghan air force crew prepares a Russian-built Mi-17 helicopter for a flight at a military base attached to Kabul International Airport. The tiny Afghan air force had to be built from scratch after the U.S. invasion of Afghanistan in 2001. (Heath Druzin/Stars and Stripes)

The Taliban claimed to have shot down the aircraft, but the Defense Ministry attributed the crash to technical difficulties.

The dead included 12 soldiers and five helicopter crewmembers, an officer with the Afghan army’s 205th Corps told Stars and Stripes.

The crash ranks as one of the deadliest for the fledgling Afghan air force, which is among the security forces now tasked with fighting the lingering insurgency after the NATO-led coalition declared an end to its combat mission last year.

The Mi-17 transport helicopter went down about 10:30 a.m. in Zabul province in Afghanistan’s volatile southern region. Gul Islam Seyal, spokesman for Zabul’s governor, said the downed aircraft had been escorting another helicopter carrying a government delegation surveying the area’s security situation. The aircraft carrying the officials landed safely, he said.

The Defense Ministry said a quick-reaction force had been sent to the crash site.

No coalition servicemembers were on the flight, said Col. Brian Tribus, a spokesman for the NATO-led Resolute Support mission, which trains and aids the Afghan security forces.

Maintenance has been a challenge for the small air force, which remains heavily reliant on international support. International advisers have struggled to train enough crews to maintain even the small number of aircraft in the fleet.

Deadly incidents with Afghan aircraft so far have been rare. In September last year an Afghan Mi-17 transport helicopter crashed when it hit the wall of an army compound in bad weather, killing one and injuring six.