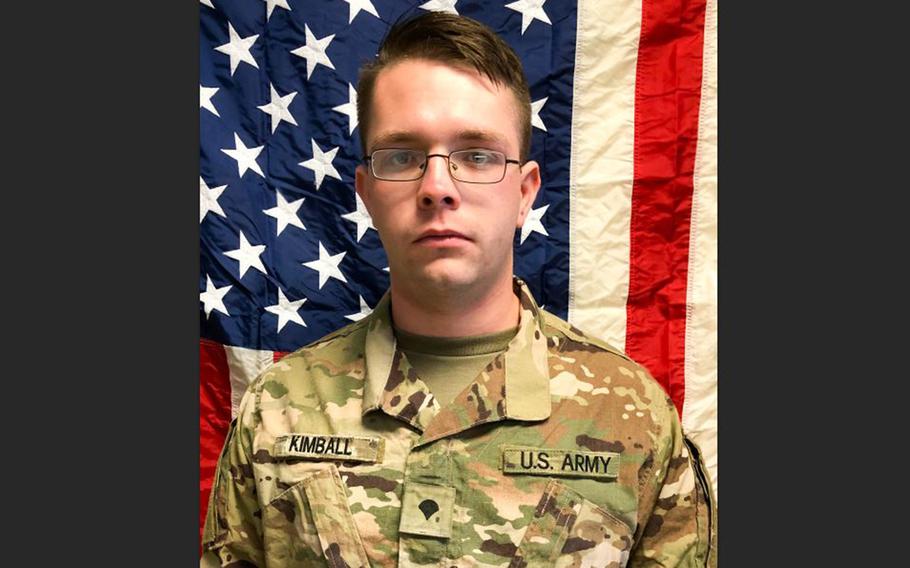 KABUL, Afghanistan — A U.S. soldier has died in a noncombat incident at Bagram Airfield in Afghanistan, the Defense Department said Thursday.

Spc. Branden Tyme Kimball, 21, from Central Point, Ore., died Wednesday at the base, which is the U.S.’s largest outpost in the country, the Pentagon said.

The Pentagon provided no further details about the incident but said an investigation has been launched.

“Our thoughts and prayers are with the family and friends of Spc. Branden Kimball during this very difficult time,” said Lt. Col. Kamil Sztalkoper, spokesman for the 10th Mountain Division, which the 10th Aviation Regiment is part of. “He will be missed from our formations.”

Kimball joined the Army in August 2016. His awards and decorations include the National Defense Service Medal and the Afghanistan Campaign Medal with Campaign Star.

Official photos posted online show some elements of 10th CAB rotating back to the U.S. in December and January.

The U.S. has been gradually drawing down its military presence in Afghanistan as it works to negotiate a peace deal with the Taliban.

The two sides are believed to be close to signing a deal, which the Taliban want to include a full withdrawal of international forces from the country. Defense Secretary Mark Esper said Thursday at the end of a meeting of NATO defense ministers in Brussels that the U.S. and Taliban have agreed in principle to a “seven-day reduction in violence” in Afghanistan, which could kick off troop withdrawals and lead to a peace deal to end the war in the country.

There are currently about 13,000 U.S. troops deployed to Afghanistan.

Kimball’s death brings the number of American troops to have died there this year to seven. Four of the deaths have been combat-related.

The first American combat fatalities of 2020 came in mid-January, when Staff Sgt. Ian Paul McLaughlin, 29, and Pfc. Miguel Angel Villalon, 21, were killed in action when their vehicle hit a roadside bomb in southern Kandahar province.

Air Force pilots Lt. Col. Paul Voss, 46, and Capt. Ryan Phaneuf, 30, died in late January when their Bombardier E-11A crashed in central Ghazni province. The plane did not appear to have been brought down by enemy fire, U.S. officials have said.

More than 2,300 U.S. service members have been killed in Afghanistan during the 18-year war, America’s longest.