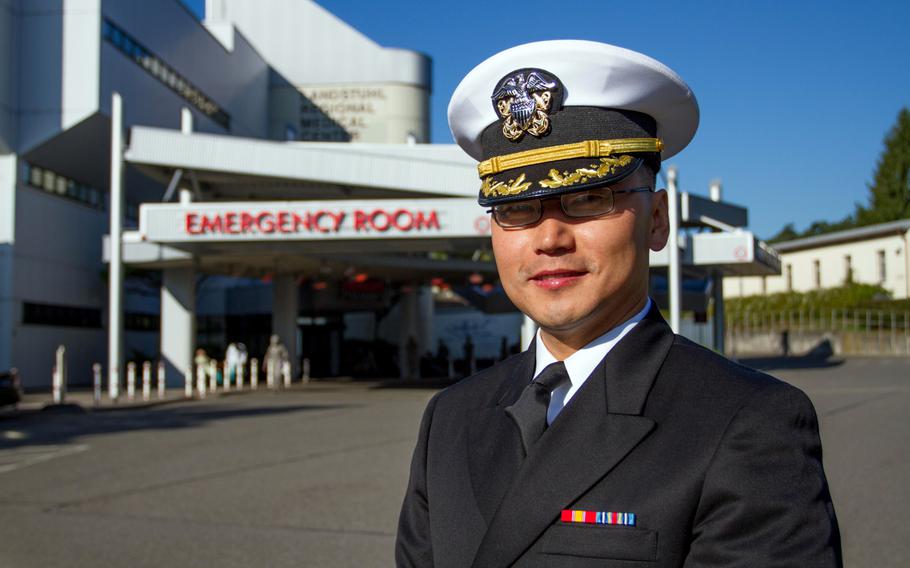 Buy Photo
Already a world-class neurosurgeon, Kendall Lee joined the U.S. Navy Reserve at the age of 42 in part to give something back to his adopted homeland. Now 44, he is serving his first tour on active duty as a Navy commander at Landstuhl Regional Medical Center in Germany. (Matt Millham/Stars and Stripes)

Buy Photo
Already a world-class neurosurgeon, Kendall Lee joined the U.S. Navy Reserve at the age of 42 in part to give something back to his adopted homeland. Now 44, he is serving his first tour on active duty as a Navy commander at Landstuhl Regional Medical Center in Germany. (Matt Millham/Stars and Stripes) 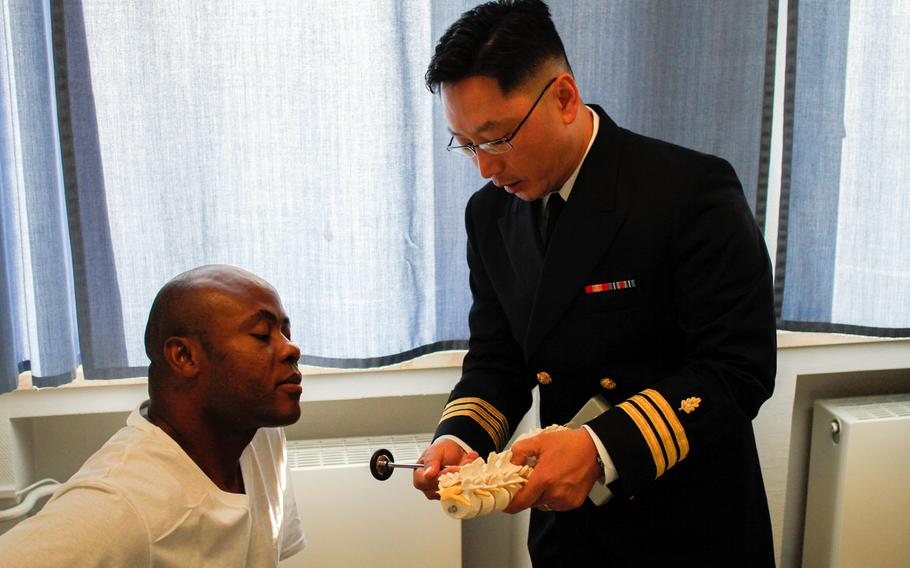 Buy Photo
Navy Cmdr. Kendall Lee, right, explains to Army chaplain (Capt.) Thomas Obiatuegwu what's causing the Catholic priest's debilitating back pain. Lee, a Korean immigrant, joined the Navy Reserve at the age of 42 as a neurosurgeon, in part to repay his adopted country for the opportunities it provided him and his family. (Matt Millham/Stars and Stripes)

LANDSTUHL, Germany — Growing up in a Korean fishing village was idyllic, said Kendall Lee. He swam every day, caught fish from the sea and ate them for dinner.

It was a small place, he said, just 300 or so friendly people. His dad was a pharmacist, his grandfather a fisherman. They were not, by local standards, poor.

But, he said, in the late 1970s, Korea was still a Third World country clawing its way out of the destruction of the Korean War. Educational opportunities for rural kids like him and his sister were almost nonexistent.

So when he was 10, when the only English word he knew was “doctor,” his parents pulled up stakes and moved the family to Denver. There, he said, they found the opportunities they were looking for.

After finishing high school, Lee went to college in Denver, graduating in three years with a bachelor’s in biology while working in the school’s neurology lab in a work-study program.

The National Institutes of Health took notice and paid for him to go to Yale, where he earned a double doctorate – an MD PhD. From there, he went on to medical residency at Harvard for neurology.

But it was neurosurgery that intrigued him. After two years at Harvard, he switched to Dartmouth to take up his passion.

After finishing his education seven years ago, Lee was snapped up by the Mayo Clinic in Rochester, Minn., one of the world’s premier hospitals and research institutions and started up its neural engineering laboratory, which he directs.

He was performing about 200 surgeries a year, about half of them to implant electronic devices in people’s brains to squelch the effects of Parkinson’s disease, dystonia and tremors. When he wasn’t operating, he was teaching and researching, pioneering work that might one day provide a cure for paralysis.

Now, though, he’s on leave from Mayo, trying to figure out something far simpler, yet for him profound: How to be a sailor.

So at 42 — an age when many servicemembers are planning their retirements — Lee surprised his friends and colleagues by signing up for the Navy Reserve.

Already a world-class surgeon and researcher, he entered service as a commander, an elevated rank that would take a regular Navy careerist at least 15 years to reach.

Now 44, he’s serving his first stint on active duty as a neurosurgeon at Landstuhl Regional Medical Center, a military hospital 1/20th the size of the Mayo Clinic.

“He’s used to having a staff at Mayo Clinic doing all kinds of stuff for him,” said Command Master Chief Ron Naida, who has been giving Lee a crash course in Navy life. “And you know, it’s a bit of a culture shock. But the guy’s stoked to be in the military.”

Despite his age and experience, Lee said coming to Landstuhl was like going back to his intern years at Dartmouth – “that whole feeling of being a deer in the headlights.”

Used to suits and lab coats, he wasn’t sure how to wear the Navy uniform. He bought new boots hoping to make a good first impression, only to get chewed out for not having them shined. The two-week crash course he got upon joining the reserves taught him the basics, but not everything a senior officer should know.

“It’s kind of funny, but it’s also stressful, because I’m a commander,” Lee said. “So I want to make sure I’m doing everything correctly.”

The thought of joining the reserves first struck Lee years ago in medical school, he said, and came up again while he was in his residency.

“Quite frankly, the paperwork was too much” with everything else in his life at the time, he said.

At Mayo, though, his mother’s words came back to him as he met colleagues who either served in the military or are serving in military reserves. There he also learned the story of a Mayo legend who, even in death, made him rethink what it means to be a great man.

Thoralf Sundt graduated from the U.S. Military Academy at West Point in 1952 and shipped off to fight in the Korean War with the 7th Infantry Division, where he earned two Bronze Stars for valor. He left the service in 1955 for medical school, graduated four years later and quickly began amassing achievements as a neurosurgeon.

His invention of a clip graft to stop brain bleeds and work with operating microscopes led to an NIH fellowship at the Mayo Clinic, where he accepted a job in 1965 and later rose to chair the hospital’s department of neurologic surgery. It was there in 1989 that he operated on former President Ronald Reagan.

By then, Sundt had been battling bone marrow cancer for years, Lee said, and his body was wracked with pain. Sundt’s cancer battle was profiled in 1991 by CBS News’ “60 Minutes,” where he talked about his illness and the strength he gained from his patients. At the time, his bones were so brittle that a sneeze could break a rib, the program reported.

But even as Sundt got weaker and the pain grew, he continued to treat patients until the very end, Lee said. Sundt died a year after his “60 Minutes” interview.

“It’s not that I’m saying I want to be or could I ever attain that level of commitment, that level of intelligence, that level of service,” Lee said. “But at least having a role model that is that tremendous a power gives me something to work towards.”

Lee never met Sundt, but believes that part of his grit came from his service in war. Lee hoped to learn something about perseverance at Landstuhl, and he found it – in physical training.

At Mayo, he neglected his body for a long time, he said. Passing the Navy’s physical fitness test was, at first, hard.

Now Lee goes to the gym every day, Naida said. “He’s in better shape than me.”

More than a test of endurance, “it’s a test of will,” Lee said. “So that’s one of the things that I’m going to take back with me” to Mayo.

“I think that’s where Thor Sundt ... probably got that and understood that.”

Lee’s time at Landstuhl is likely to stall rather than advance his academic, he said. “But I did not do this to further my career.”

Lee joined up because “he was looking at a way to pay back all the things that the U.S. has provided for his family,” said Kevin Bennet, co-director of Mayo’s neural engineering lab and one of Lee’s close friends. “He would still be in a fishing village ON the coast of Korea if it hadn’t been for the United States.”

Ironically, though, Landstuhl can’t make use of all of the arcane knowledge and skills he’s acquired.

His specialty, deep brain stimulation, requires expensive equipment and a staff of specialists. His team at Mayo numbers about 50, he said.

Landstuhl, whose primary role is to treat the casualties of war from places like Afghanistan, isn’t equipped for that.

So the surgeries he performs at Landstuhl tend to be far less exotic, but for him no less exciting.

Much of his time is spent on “the bread-and-butter things that still make you a neurosurgeon – discectomies, spinal traumas and brain surgeries,” said Army Lt. Col. Brett Freedman, a spine surgeon and chief of Landstuhl’s spine and neurosurgery service.

“He’s, without question, been our most energetic and selfless servant that’s come through,” Freedman said.

Unlike most of the surgeons who’ve filled the slot, Lee didn’t join the military for the educational funds or other incentives, Freedman said.

“He really is idealistic, and he really believes in what he’s doing,” he said. “This is more quality of life and doing things that you think are right. And he certainly is.”

A few months ago, Lee removed a bullet from the spine of a contractor who was shot in the back during a gunfight with insurgents in Afghanistan. When relaying the details of the surgery, he sounds less like an old hand than a newbie effusing about his first successful solo surgery.

“I think part of it is that, well, he’s never been in the military,” Bennet said.

Lee handles some trauma at Mayo, but not much, Bennet said. There, most trauma cases are the product of personal choices – speeding on a motorcycle or driving drunk.

At Landstuhl, though, the trauma patients Lee operates on “got injured by somebody who is trying to do harm to them and everybody in the United States,” Bennet said. Lee’s excitement stems from the fact that “he got to help that person.”