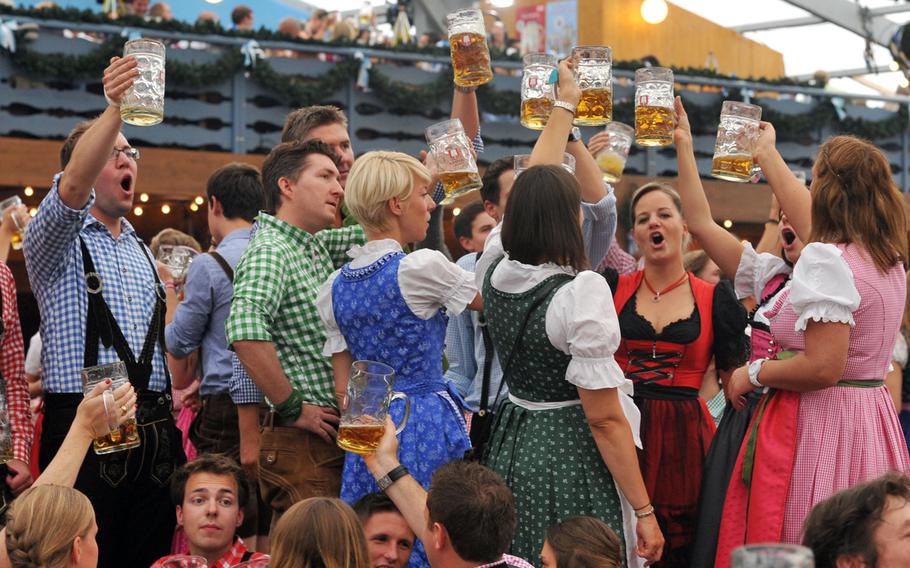 Munich’s world-famous Oktoberfest is a party like no other.

The tents crammed with thousands of revelers are akin to one big college frat house party, except with better beer and way more charm.

Like any party involving alcohol, the merrymaking can end badly, and sometimes does, for the millions of women and girls who attend the annual event, which started Saturday and runs through Oct. 6.

Each year, an average of six to eight incidents of rape on the Oktoberfest grounds are reported to police, according to Kristina Gottlöber, a social worker with the Munich-based Initiative for Munich Girls. The number that goes unreported is believed to be much higher, she said, based on the number of calls received by the counseling center in Munich from women who choose not to report.

Gottlöber’s organization is one of three in Munich striving to make women more aware of the sexual assault issue at Oktoberfest. Foreigners can be especially vulnerable, she said, particularly if they don’t speak German or know their way around Munich.

“We want them to have fun, to enjoy their trip to Munich, but it’s better that they protect themselves ...,” she said, “because everyone thinks this cannot happen to me.”

The best defense is to come prepared. Write down the address and phone number of one’s hotel or campsite on a piece of paper and keep it tucked away in a place where it can’t get lost, Gottlöber suggests.

Cell phones aren’t a fail-safe method since they sometimes don’t always work at Oktoberfest due to so many people trying to use their phones at the same time, thus overleading the system, she said.

Designate a meeting point with friends at a conspicuous landmark like the Ferris wheel, she said. “If we lose each other, let’s meet every full hour at the Ferris wheel.”

“We often heard these stories from women,” she said. “They got lost, they’re sitting behind the tent crying. A stranger says should I bring you home, and they go because they need help. Sometimes the guys are really nice. Sometimes they are not.”

The German initiative “Sichere Wiesn für Mädchen und Frauen” – Safe Oktoberfest for Girls and Women – has been offering to help women at the fest since 2003. The project has a security point set up on the Oktoberfest grounds for women only. A social worker, psychologist and volunteers are on hand from 6 p.m. to 1 a.m. daily, and from 3 p.m. to 1 a.m. every Saturday during Oktoberfest. The security point is located below the Bavaria statue in the service center (servicezentrum in German), next to the police and at the same entrance as the Red Cross. The telephone number: +49 89/50 222 366.

Last year, 162 women and girls, many from abroad, sought assistance at the security point, Gottloeber said. Four alleged they had been raped, others reported being sexually assaulted in other ways. But, more commonly, the women end up lost or separated from their friends, Gottlöber said.

“They are alone. They don’t know what to do,” she said. “They can come in and use the Internet, use the telephone. They can calm down, have coffee, tea, water.”

For those staying in Munich, a volunteer can drive them to their hotel or camping site, if needed.

Usually, they are drunk, she said.

Oktoberfest beer, “we call it strong beer,” Gottlöber said. The Munich beer is 6 percent alcohol by volume and served by the liter, a combination that can quickly intoxicate a woman, especially if she is not eating.

Gottlöber said some women have been sexually assaulted while sleeping in the grass on the fest grounds.

Security officers are present inside and outside the tents but it can be difficult to discern when a woman is in trouble because of the crowds and noise, she said.

“I can remember we had many cases of rapes (in recent years) where so many people have been, nobody sees this,” she said. “The servers in tents, security, they are overwhelmed, it’s so stuffed with people. It’s hard to see every situation.”

For more information on Safe Oktoberfest for Girls and Women, go to: www.sicherewiesn.de