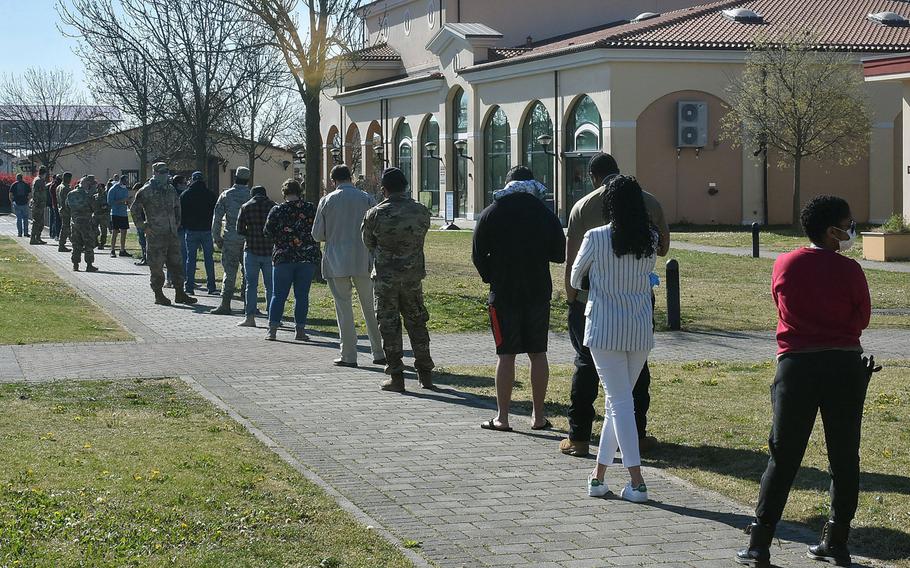 Buy Photo
More than 70 people stand in line outside the post office building at Aviano Air Base, Italy, last month. Italy on Monday eased some coronavirus restrictions, which had been in place for as long as late February. Americans will, for now, see little change on U.S. bases in the country. (Kent Harris/Stars and Stripes)

Buy Photo
More than 70 people stand in line outside the post office building at Aviano Air Base, Italy, last month. Italy on Monday eased some coronavirus restrictions, which had been in place for as long as late February. Americans will, for now, see little change on U.S. bases in the country. (Kent Harris/Stars and Stripes) 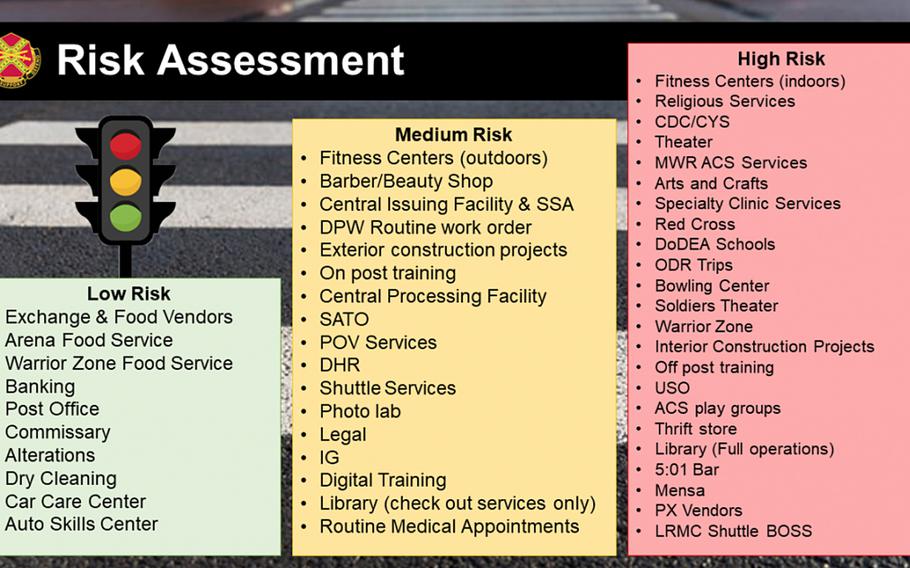 U.S. Army Garrison Italy produced a graphic to break down the operations on base by the potential of spreading the coronavirus under proper social distancing practices. Col. Daniel Vogel, the garrison commander, said opening up those listed in green are judged low risk, while those in red are high risk and unlikely to reopen soon. (USAG Italy)

AVIANO AIR BASE, Italy — U.S. bases mostly maintained their coronavirus restrictions in Italy on Tuesday, a day after the country eased its patchwork of rules to allow more than 4 million people to return to work.

The commanders of the two largest U.S. communities in Italy, Vicenza and Naples, said there wouldn’t be any immediate reopenings on base as Italy introduced Phase 2 of life under the pandemic. The third largest, Aviano, only announced a few moves — reopening its nine-hole golf course, track and tennis courts — and said the base’s two Deja Brew coffee shops will open for takeout Wednesday.

“The new national decree has provided us a green light on how to start the road to recovery,” Maj. Gen. Roger Cloutier, commander of U.S. Army Africa, said in a Friday virtual town hall meeting at Vicenza. “However, we’re going to take our time.”

Cloutier and Col. Daniel Vogel, commander of U.S. Army Garrison Italy in Vicenza, outlined a plan in which every facility or service on base closed due to coronavirus restrictions will be reviewed.

Those seeking to restart will have to submit justifications, and plans will be studied and submitted to Cloutier each Thursday. Some decisions would need to be made by U.S. Army Europe and none would take less than 72 hours to implement, meaning Caserma Ederle and Del Din won’t see any on-base changes until at least May 11.

Cloutier said research has shown that second waves of such epidemics are “generally within the norm.”

“Once we open a service, I do not want to close it again,” he said.

In Naples, Navy Capt. Todd Abrahamson wrote in a Sunday Facebook post that leaders are meeting with local authorities and studying options.

“I will not be lifting any restrictions onboard NSA Naples locations at this time,” Abrahamson said.

Aviano touted some of the new things that its service members will be able to do off base at its town hall meeting Monday.

Those include the ability to not only exercise further than 500 meters away from one’s home but do so with household members — as long as everyone over the age of 6 wears a face mask when getting within 2 meters of anyone outside the family.

The new measures in the Friuli Venezia-Giulia region allow a family to drive up to the nearby Dolomite mountains for a hike, said Lt. Col. Matthew Lund, the base’s staff judge advocate. Bike rides and walks are in; parks are open, but playgrounds are not.

The Army and Navy are still talking with local authorities about exercise regulations in their regions.

Most retail outlets across Italy remain closed, though many factories reopened Monday. Dining in restaurants is still not possible, but those establishments can now not only deliver food but accept customers for takeout.

Italians are now allowed to visit extended family members at their homes.

“It does not mean you can visit friends,” Lund said.

Prime Minister Giuseppe Conte has said that if the number of those infected does not rise again, more retail venues could open May 18. Others, including restaurants and hair salons, might follow on June 1.

“It all depends on how well we follow the rules we’ll be given,” Lund said, noting that rules vary between regions.

Italian wire service ANSA reported Monday that 424,000 people were cited for violations under Phase 1. The Italian Health Ministry reported Monday evening that the total number of virus-related deaths in Italy has topped 29,000. But the number of people currently testing positive fell to less than 100,000 for the first time in weeks.