Vaccine eligibility open at US bases in Europe, but appointments scarce for some 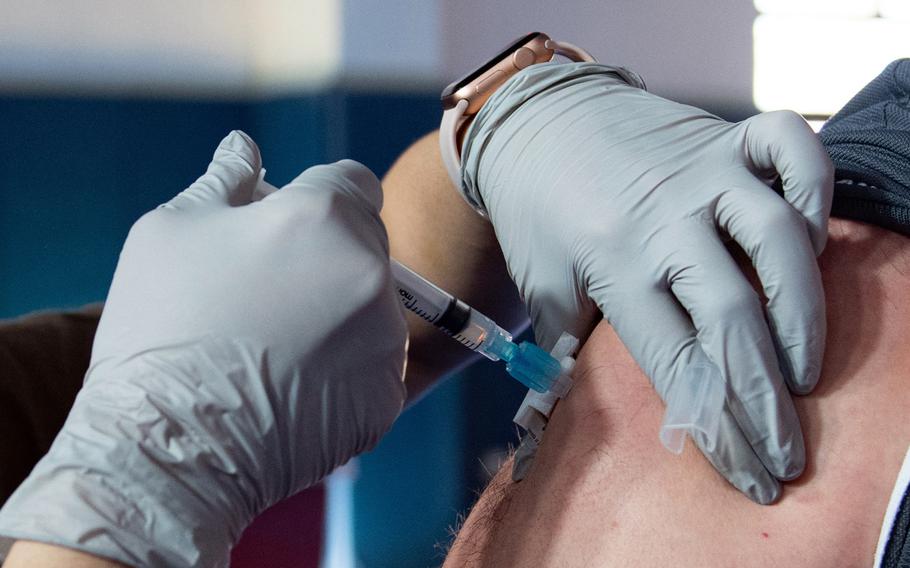 KAISERSLAUTERN, Germany — U.S. military bases in Europe adhered to a White House pledge to open coronavirus vaccinations to every American eligible for them by Monday, but appointments for a first dose remained unavailable in some areas.

Some bases listed open time slots for vaccinations Monday morning on the Defense Health Agency’s appointment portal, including Spangdahlem and Geilenkirchen air bases in Germany, and in Italy, Aviano Air Base and Naval Support Activity Naples.

Landstuhl Regional Medical Center in Germany, the military’s largest overseas medical facility, began offering appointments to all eligible adults Monday afternoon. But in Bavaria, home to about 40,000 garrison personnel, there were no appointments available through the DHA portal at seven vaccination sites, including two at Hohenfels, two at Grafenwoehr, and one location each at Ansbach, Katterbach and Vilseck.

More appointments should open for all eligible beneficiaries, including the general adult population, as an expected 20,000 to 30,000 doses per week begin arriving over the next few weeks, U.S. European Command officials said Monday.

“We’re really turning a corner here in the next week or two broadly across (the region) to make vaccines available to the entire population,” said Air Force Lt. Col. Elizabeth Erickson, EUCOM command surgeon. “Our pace is really picking up, so it’s very exciting.”

The Pentagon announced Friday that overseas bases would receive additional doses of the Moderna vaccine to make up for the temporary pause in administering the one-dose Johnson & Johnson vaccine. The Centers for Disease Control and Prevention and the Food and Drug Administration are investigating reports of rare but potentially dangerous blood clots in the J&J vaccine.

EUCOM expects to receive 30,000 additional doses of Moderna in the next few weeks, on top of the 83,000 forecast to arrive by May 7, EUCOM officials said.

The Moderna vaccine is administered in two doses about a month apart.

The uptick should help EUCOM reach its goal of administering a first dose to all eligible adults by mid-May and fully vaccinating all who want the shots by the end of July, Erickson said. Vaccination rates at bases in Europe have mostly lagged behind those in the United States.

President Joe Biden announced April 6 that he had moved the deadline for states to open up coronavirus vaccinations to all U.S. residents 18 and older to Monday.

U.S. military medical clinics in Europe are working to ensure vaccine appointments are available for all eligible adults this week, Erickson said. Some are using the Defense Health Agency appointment portal at https://informatics-stage.health.mil/COVAX/, while others are setting up their own scheduling system or are holding mass vaccination events, she said.

The DHA portal listed most installations in Europe and several in Asia on Monday.

In Italy, Aviano said it had first- and second-dose appointments open to all U.S. beneficiaries 18 years and older Friday. U.S. Army Garrison Italy said it was doing the same in a Facebook post Monday evening.

Each base is managing its own site on the DHA portal, Erickson said. Some are ensuring they have vaccines inbound or on the shelf “before they load up those appointments,” she said.

Ramstein Air Base was not listed on the DHA portal. The base said it was finalizing its appointment process and planned to host a virtual town hall meeting Tuesday at 4 p.m. to discuss vaccine distribution.

Geilenkirchen said on its portal page that it was providing the vaccine to all those eligible in its area of responsibility, which does not include patients from Spangdahlem, SHAPE, Brussels or the Kaiserslautern area.

People are encouraged to get vaccinated in their base community, Erickson said. If they go elsewhere, they should “get their second dose at that location because” second-dose shipments are aligned to first doses, she said.